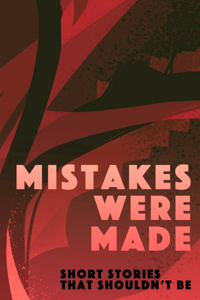 Mistakes Were Made: Short Stories That Shouldn't Be

Sat on his throne, the Marquis found himself dozing off here and there, a peaceful torpor persisting despite the discomfort of the great stone armrests. Thrones weren't built to be comfortable; they were built to keep their occupants alert while they listened to their petitioners' concerns for the day.

Despite that, he'd raised his daughter to be able to sleep in one anyway, and look damn comfortable while doing so. She was doing it now, in fact, resting her head against the back of the other stone throne across the hall. And looking very comfortable dwarfed in it. It was important to keep up appearances for the peasants, who had certain expectations of their rulers.

But something wasn't right here.

Even as he found them closing again, the Marquis forced his eyes open with a struggle and brought more with them than just sight. His mind flickered between haziness and alertness, and it took a great effort of willpower to keep thinking. The allure of sinking back into slumber was almost overwhelming, promising comfort he hadn't felt in... far too long.

And there it was. He gazed down at his hands, bright, colourful, and distinctly two-dimensional, from his position on the back of the throne.

With a mental roar, he tore himself back into reality, cracking through the paint until he sagged, exhausted, on the seat of his power. Power that could not save him.

It took a great effort to lift his head. His daughter was still sleeping.

Their mighty house had carried him through centuries, but of late the march had fallen on hard times; taxes drying up as the fields grew barren with pestilence and rains that wouldn't come. Rather than rule with an iron fist, he had chosen to wear the losses in hope of surviving until it passed. Fortunes went through cycles, after all. A few more years and it would be just a memory.

But he didn't have a few years. The treasury was gone. The former opulence of his throne room, now just plain grey stone. He could still see the shadows where tapestries had once hung on the walls, and the scrapings of chisels where gold leaf had been removed to feed his people.

But it had been too long. The lifeblood sustaining him for so many years was now all but gone, and it was so difficult to think.

The Marquis dared not cross the throne room and wake his daughter. His hands flickered, ocsillating between reality and paint. His daughter was not like him, not entirely. Half flesh and blood - true flesh and blood, not like him. But he was truly her father, and she wasn't waking up.

He wasn't sure how long the two of them had been dozing, but it felt like a long time. He didn't remember when the shadows had grown so long in the day. His last pair of guards had left days ago - he thought it had been days, at least - when he could no longer pay them.

Now, though, he feared.

If he tried with everything he had to stay alert, there was a chance he could push through. But for how long? Long enough to see the coffers start to fill again, in a treasury no longer staffed? He could barely lift his head, let alone embark on the journey it would take to collect employees and taxes.

And his daughter - she didn't feel the pull as strongly. Between the two of them, the strain on their lifeblood was too great. They would both perish from it. But if his daughter could access the full supply, meagre as it was, maybe she had a fleeting chance.

He'd have liked to leave her a message - a warning, advice - but his strength was already failing again. He let it go, sinking back into swirls and colours that crawled on his thoughts and crept through his corners.

The mural on the back of the throne looked sad, despite being the only splash of colour in the barren hall. It looked at the sleeping girl on the other throne for a moment, then drew itself up and gave a grand scoundrel's grin. The type the Marquis had been famed for in his heyday.

And there it stayed.

After a long while, the Marquise opened her eyes, heaviness still dragging at her thoughts. Only the cold discomfort of stone prevented her from readjusting herself and falling back into sleep's warm embrace.

A splash of colour caught her attention, the first one there'd been for a while. Only then did her eyes widen, and she ran to the throne, letting out a howl no one was around to overhear.

Bio: Because writing is fun.