From my vantage point on the floor where I'd fallen after slamming against the wall of the cave, I watched as Lucy forced herself to her feet. She was absolutely apoplectic.

"Don't. Hurt. My. FLUFF-KINS!" she screamed, and whipped her hammer around without even looking, slamming it into the side of a plorg that had been running at her. Her focus was wholly on the plorg with the axe, who was still off-balance. The unfortunate secondary plorg made an ugly splat sound and went flying off to the side. Thankfully, I was pretty sure that the plorg she'd just murdered was the only remaining healthy one of the bunch, aside from Mr. Axey. I couldn't see the fourth and final plorg from where I was lying, but he'd been a sneeze away from death, so maybe he'd bumped into a wall or something and expired. A bird could dream.

The plorg with the axe had finally gotten his feet under him and pulled his axe back around when Lucy arrived. Instead of winding up with her hammer, though, she just jabbed him in the solar plexus with it. It didn't look like it hurt much, but it once more pushed him off-balance and the axe swished through the air harmlessly to her side. She used the time that gained her to get into position, and as the plorg turned back her way he was met with an Icy Grip-enhanced hammer to the face. The plorg went one way, the axe went the other, and Lucy advanced, implacable.

I still hadn't seen the fourth plorg, though, and I was getting worried. While Lucy beat the bejeepers out of now ice-inflicted, former-axe-wielding plorg, I laboriously pushed myself to my feet and went waddling my way across the cave. My whole body ached, but I didn't feel any sharp pains anywhere so the jury was out on whether or not I'd actually suffered permanent damage.

Ah, there he was! Looked like the fourth plorg must have gotten caught by the tail end of the ice explosion, because he was a little blue-ish and moving like an arthritic oldster. Despite being slow, though, he was in Lucy's blind spot and trying to reach her, which was no good at all. Hey udder flicker, let's see how plorgs taste!

I came up behind him and pecked him on the calf.

Huh. Turns out that I can deal minor amounts of damage, because the plorg stiffened up and toppled over. Timber! He must have been on his absolute last health point.

I checked on Lucy. Yeah, she was fine. Well, physically fine, at least. She was still screaming incoherently as she reduced the plorg formerly known as Mr. Axey down into plorg pâté. I eyed the downed plorg in front of me speculatively. Pecking him hadn't imparted any flavor, and Lucy was more likely to get loot from the obviously higher leveled axe fighter anyway, so…I pecked the plorg.

Blech, ugh, flick my snazz, that was horrific! Where gribblins tasted like an especially piquant mud pie, plorgs were like rancid meat from several different animals that got stuffed in a blender and made into a smoothie. With a hint of banana. While the plorg in front of me dissolved into nothing, I desperately tried to spit. Which, since I was a bird and had no saliva to speak of, didn't do much beyond make me look pretty silly as I bobbed my beak around and tried to swipe it out with my arms.

Sa-woop! Well, at least I got the physical size increase. Whoa, I think I grew even more than when I pecked the gribblins. Felt a little dizzy there for a second. Or maybe that was just shock over the still-lingering flavor.

I was never pecking a dead plorg again. Ever.

Oh cream, I forgot about Lucy!

Fortunately, it looked like she was still kicking—or more accurately hammering—and I didn't have anything to worry about. I started to make my way over to her, and was about halfway there when she evidently ran out of energy and finally stopped taking out her anger on the smear-formerly-known-as-plorg, dropped her hammer, and sat down right on the ground. Boy, that battle really took it out of—Bloo-patunka-tee!

Holy scribble! That was the sound that played when a player gains a class! I sped up as Lucy looked up in surprise, but instead of opening her interface she snatched me up and squeezed me, compressing me almost as much as the axe had. Somehow, getting squeezed this way didn't hurt at all, though.

"Mr. Familiar! You're alright! Thank goodness!" Huh, come to think, that was the second time she'd called me by my actual name, wasn't it? Well, the moniker that sorry excuse for a god had slapped on me, but I was starting to identify with it. It wasn't like my real name would make any sense applied to a fuzzy little bird.

I wasn't sure how I felt about either the fact that I was growing comfortable with "Mr. Familiar" or the fact that Lucy was calling me that instead of one of her absurd diminutives, but then with a final squeeze, she partially relinquished me—at least enough to swipe open her interface with one arm. "Let's see what that sound meant!"

"Berserker? That. Sounds. Awesome!" Without hesitating for a moment, Lucy stabbed her finger down on the "yes" option.

Despite the number of characters I'd taken to max level, I'd never played as a Berserker back in my previous life. It was a moderately rare class in that it was not only an achievement class—that is, one that could only be unlocked by performing a specific action rather than one that was taught by a class trainer—but the achievement was poorly understood. Plenty of people thought the class sounded cool, but a lot of them got tired of dying again and again as they tried to unlock it, and inevitably gave up. The working hypothesis just before I'd moved on to my current bird-ful existence was that you could only unlock Berserker by fighting a group, the average level of the group had to be 1-3 levels above your character, and you couldn't use any healing items at all. Some players claimed that Berserker wouldn't unlock if you so much as had a healing item in your inventory, which given that Lucy was still not drinking any potions might actually be accurate.

In any case, common wisdom said that it was better to try and farm difficult fights looking for Berserker as a sub-class rather than a main class, because it was so much more difficult to unlock at low levels without summarily dying.

It didn't surprise me even a little bit that Lucy was bucking that trend, albeit unintentionally. I hadn't considered trying to guide her toward Berserker, since although the class skills were perfect for her in-your-face fighting style, the unlock requirements were completely impossible for me to influence, even if I'd understood exactly what they were. But here we were; guess the requirements must have been crafted correctly, because if there were ever a player who embodied the virtue of dashing into danger without a care in the world, it was Lucy.

I dragged my attention back to Lucy's interface. She'd evidently been digging into the details a bit while I was off wool-gathering.

Furious Rage
When invoked, enter a state of boundless rage! For a short time, melee attack speed and damage is increased; you gain health regeneration if your health is below 30%.

Ooh, nice! I'd been hoping that was one of the initial skills, since it was going to be super handy for Ms. I Don't Carry Potions With Me. Although how on earth was Lucy supposed to "invoke" it? Huh, actually, how were people supposed to learn to use any skill that they received that wasn't from a trainer?

Provocation
Provoke enemies within 10 meters to focus their attacks on you for a short time!

Huh. That was kind of a tank-y skill, and I'd always thought Berserkers were more melee-focused damage-dealers. I also couldn't remember reading about this exact skill. Maybe it was only granted to folks who took Berserker as their main class? I supposed it kind of fed into Furious Rage, though.

Ooooooh, plus it meant that Lucy could on-demand draw enemy attention even when Mr. Nix-butt was dancing around in her way! Oh, I was liking that more and more…hey, wait a minute! Apparently we'd leveled up at the same time as she unlocked the class, and while I wasn't watching, Lucy had pulled open my character screen and dumped the skill points I'd gained into Plushitude.

Diddle it, I knew that was going to happen! Huh, looked like I gained a behavior point to Plushitude at some point, too. Must have been when I got hit by the axe; that whole experience was kind of fuzzy in my memory.

Having screwed with my life just that little extra bit more, Lucy switched over to her own character screen and distributed her own points:

She sighed in satisfaction as she closed her interface, and gave me a quick squeeze. "Ahh, that feels good. I finally got three out of four leveled off, though I'm sure that darn Intellect is going to screw things up in another level or two."

Yeah. That darned Intellect. Shucks, if only we didn't have so much intellect around here!

"I know, it's impressive that I got things leveled off at all, isn't it? Even if it will get messed up again in another couple levels."

That was sarcasm, Lucy. Clearly Expressiveness bumped up above 20 by my level-up didn't do anything for our mind meld.

"I really don't know why the game developer made character stats grow in such a lop-sided way. It's just not fair!"

Why do I even bother?

"Unfortunately, Fluff-kins, it's getting late and I don't think I can get much further in this dungeon without a little healing. Maybe I should have saved some money so I could afford potions, huh?"

Lucy pushed herself to her feet and started looting the bodies of the three remaining plorgs.

She didn't let go of me the entire time until she logged out.

A note from EO Tenkey

And Mr. Familiar survives to fight another day! Boy, cliff-hangers are the worst!

Erm, so here's Lucy after she gets some actual equipment! Thanks for not dropping the series like a hot rock after that last chapter left you in the lurch! 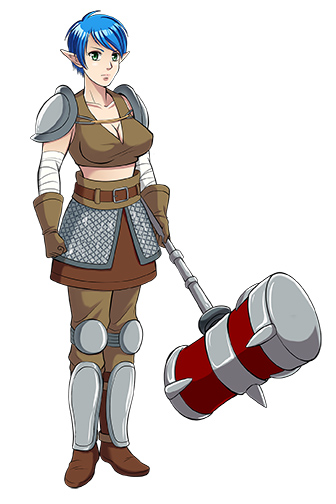