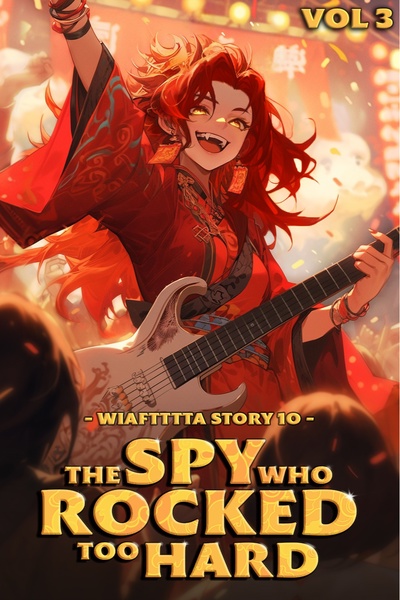 This is a Xianxia comedy and satire by the author of Cold Steel Dig and Tome of Stealth. But it is also a series of interconnected and chronological short stories (featuring the same main characters). For example, it’s similar to the structure of Fred the Vampire Accountant series by the wonderful Drew Hayes.

I wasn’t quite sure what to expect from this story. The cover art is cute and chibi, while the blurb radiates pure chaotic energy. And I’m not exactly a regularl purveyor of the xiaxia format, I’ve read Cradle, Forge of Destiny, and… yeah, that’s about it.

But I’m very glad I did.

The first thing that attracted me to Dragon’s MC is that she has a bit of a mean streak. Nothing over the top—she’s not a bully—but she’s rightfully mad as hell to be in the situation she’s in and not shy about expressing that fact. What sets WIAFTTtTA apart is how this characterization is expertly tied into the MC herself. She never stews in her anger. It just makes her more proactive, which is incredibly entertaining to watch.

WIAFTTtTA is also one of those well-written satires that refuses to trade a good story for a cheap laugh. There are jokes, funny ones—Dragon has a strong sense of comedy and timing—but they never usurp the story itself. There’s also hints of a much larger narrative threads at play, despite the implication that this is a series of tangentially related short stories. I’m on to you, author.

The comparison to traditional publishing I keep coming back to is that WIAFTTtTA reads like a less british, more angry, Terry Pratchett.

Great stuff. Every minute spent reading this was worth it, and I look forward to reading more.

I was excited to read this one from the start. Its concept alone is a ton of fun. Protagonist Fairy Lin has been transmigrated from Earth into a xianxia book she's never read, and has already done one 1000-year stint in its fictional world, cultivating and striving for immortality while being thwarted at every turn by her nemesis, the main character - the insufferable overpowered edgelord Bloodsword with his ever-expanding harem of wives. When she comes tumbling into the past, having failed her immortal ascension at Bloodsword's hands, she storms back into the main character's life, only to find him still an adorable, well-meaning and naive child.

WIAFTTTTA (what an acronym!) is packed full of satirical, snide and clever observations about xianxia tropes, with clear affection for the genre. You don't need to be a xianxia afficionado to enjoy this story, however; its author does a masterful job of making its references clear and its jokes accessible to all. In fact, if you removed the satire you'd still have one hell of an interesting story on your hands, with a rapid pace, immersive worldbuilding and an absolutely perfect balance of tension, character moments, and discovery as Lin struggles to dredge back her memories of how events played out the first time around, and the ongoing repercussions of her time travel-enabled changes on the world.

The grammar here is excellent and both the style and flow of the story are impeccable. I could easily see WIAF being published and don't think it would need much of an edit. It's an effortless read you can blitz through very quickly and be disappointed there isn't already more. (Incidentally, this is what happened to me.)

But WIAF's shining stars are its characters. Fairy Lin is a memorable protagonist I immediately fell in love with. Strong-willed and determined not to take any shit from Bloodsword (or anyone else), she's arrogant, highly competent and confident, yet at times hilariously inept at dealing with her abrupt fall back to the mortal realm after centuries of being unaccustomed to it. Her journey is largely one of culture shock - learning to adapt to new limitations and the occasional intrusion of humility. And yet underneath her 'grumpy old master' veneer is a heart of gold just waiting to emerge.

Bloodsword - or Little Spring, as Fairy Lin dubs him in her second run - is every bit as charming, and his hapless idealism is the perfect counter to Lin's domineering persona. The interplay between the two of them is some of the best I've seen, and the wide cast of fun supporting parody characters ensures every character interaction is an absolute blast.

Underpinning the outer fluff, however, are some genuinely serious and compelling mysteries - first and foremost being: how did the adorable Little Spring become the fearsome Bloodsword? Is Fairy Lin fair in her dismissive assessment of his annoying wives, or is there more to each of them than meets the eye? What is going to happen with the vines? And will Lin be able to reform Bloodsword, or is he doomed to retrace his former steps?

I would like to gently bop the author on the head for more story, please - this is a fantastic, fun read balancing a serious plot with lighthearted overtones. An easy five stars from me, and I can't wait for more!

Comedic xianxia in a class of its own

Fairy Lin is a grumpy cultivator accidentally killed and transmigrated into her 9 year old past self. Retaining her memories (not everything, 1000 years is a long time), she goes out to find the MC and correct past wrongs (by doing all she can to prevent him from being the incorrigible scourge in her past life).

A really fun read! Recommended if you like fiction with really long titles.

Reviewed at: Story 3 - Spiritual Vines and a Smokey Pill Cauldron (Part 30 out of 30)

This is one of my favorite Xianxia stories because the focus is on cute children, rather than the face-slapping and killing (which also happens). I enjoy the human female "fairy" main character and her adorable antics and I love the humorous tone.

The reason this novel earned a fifth star from me is because of the rules. Of course, the first rule is about not talking; but the rules are gold star material (stolen from other stories) to make this story fun! I double dog dare you to read far enough to find the rules! 😉

You ever start binging a series, forget to follow it, then have to go on a hunt for the name you half remember because you suddenly remember that you really enjoyed it? What? No? Um... Well, I do. This one is the proof.  Its quite good, and I'm honestly hooked. Give it a try. 😜

Reviewed at: Story 1 Bonus - The Girl in Our Village is Crazy

"Isn't this a bit too early to be giving an advanced review, Nameless?"

Well, dear reader, due to the nature of this story, I'm able to accurately review it all off of just the ~5k words written! You see, this collection was originally meant to be a singular short story, with a clear-cut beginning, middle, and end. However, if you're not into anthology-type stories, don't fret! This collection follows the same MCs across the same journey in (probably) chronological order. The chapters themselves are just formatted as short stories ^.^

Alright, now onto the review!

I've always been a fan of Rochester's style, and this story takes it to a whole other level with the prose. I've often praised authors for managing to mimic "traditional" xianxia style without compromising their prose, but Rochester goes a step further and manages to do so while still positively dripping satire.

That isn't to say that the satire is overwhelming, though. Rather, it's always in the background, giving way to a real, compelling, story. The characters are absolutely adorable, and these first two chapters alone hold more development than most xianxia do in their entire series.

Oh, and the grammar is great. I was a beta reader for this story, and even in its rough draft stages I barely noticed anything.

All in all, if you're looking for a wonderfully written, wholesome satire on xianxia, definitely give this a try!

I never imagined liking another cultivator's novel but hey, this one has a different take! It's actually a loop, and a transmigration, possibly an implied harem from earlier loops but, our heroine tries to avoid that trope happening again, though the payout is still decades away I guess, also a kind of maybe villainess, and she doesn't take itself seriously, but at the same time, still tries her best, and riding along is an absolute joy. I'm now totally rooting for the MC, she's so cool and she's so fun, out of ten I give her nine! 😂❤️🙊

This was an exceptionally hilarious romp through a solidly built xianxia setting.

We have an unusual protagonist is combining the traits of a self-insert, old monster, and time travel fix-it yet with enough challenge and character hooks keep the stakes solid.

The title perfectly describes the setup: Our genre-savvy girl loses a thousand years of cultivation progress at the moment of her penultimate achievement. She gets slammed back into her younger self and gets right back to work with all the unstoppable willpower of a near-Immortal driven to take back her stolen victory while also correcting the many ills she experienced the first time through.

Naturally, our budget old monster has quite the road ahead of her and a series of complications arises both shining light on her future-past and adding depth to the story while our girl comments on everything under the sun with great expertise and hilarious biases.

Very much looking forward to more!

The characters are fun and the story manages to come across quite naturaly given the premise.

After reading this, I think I finally understand why Beware of Chicken is so popular. Dropped BoC after a dozen chapters because I just could not find it funny, but this one had me ROFLing right away.

Fairy Lin is hilarious! Her hate for the original harem xianxia and edgelord Bloodsword warms my heart. I love how she is really a grumpy forgetful old master trapped in a cute child’s body.

She does feel like the only real person in the story though. Even Little Spring is an adorable kid-version of a protagonist archetype more than an actual person at this point. That’s fine if you love Fairy Lin and her cynical brand of humor, which I do, but I think enjoyment of this serial really hinges on that.