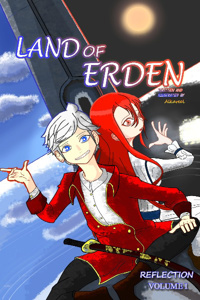 Decided to do a rewrite on this. Please do check it out. On my tapas link, I've included some images :D

Two sides of a single coin? Or two halves of the same one?

Urie Loeth was a boy living in the city of Daerin. Eager to learn magic in order to help his father, he participated in the city's annual Harvest Festival, a gathering conducted to awaken magic in children. His hopes were dashed however when he learnt that he couldn't awaken his magic.

Meanwhile, Celeste Varethe was a girl living in the perpetually dark city of Daerin. Awaiting her father's presence on her birthday, she narrowly missed his brief appearance and ran after his silhouette, only to feel confused at being suddenly pushed away.

Their unexpected meeting, brought about by fate, set off a series of events that would bring motion to the once stagnant Land of Erden.

(Some of the chapters are uploaded as first drafts.)

Giving a comment, like, rating, or a review would be greatly appreciated.
Writing a specific story, Land of Erden is my first. Well, writing a story as well as writing in general. I hope you all grow to like it.

Good good, story is quite fare it has places to grow like every other series. Cant wait to see more of the story.

Also hey I'm your second review isn't that cool, well I wanted to be first but someone got there already so now I am the 2nd review on this fiction

We have here a fantasy story that follows the life of the two main characters (as well as other POVs). It is quite slow paced as we follow them as they grow, learning about the world and the fantastical elements, as well as the plot that slowly unfolds. It might be too slow paced for some people, but it does have a relaxing, adventurous vibe, sometimes even kind of slice-of-lifey, even if there are more serious plot elements.

There's a big cast of characters and the authors tries to differentiate them and give life to each of them. However, sometimes there's too quick shifting between POVs that I can't really form a connection with them.

The writing style does remind me a bit of light novels; perhaps the author had taken inspiration from various light novels. That said, the writing is way better than the translated light novels. While it does borrow heavily from established tropes, the author tries to spin his own twist on the familiar.

The writing is more on the simplistic side, perhaps a bit blocky at times, but it's easy to read and usually flows well. It doesn't flow into needless purple prose. I didn't spot jarring gramatical errors that took me out of the story.

Anyhow, the story is just beginning and I expect more from the author.