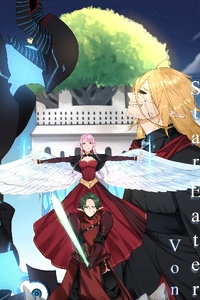 When a man finds himself in the presence of absolute power, what will he do? Dying has already happened, but he wasn't given permission and the creature responsible finds his tragedy amusing. Forcing him to continue his life in a new world, he is given an unknown task that must be completed if he ever wishes to rest.

It's a military and conflict ridden MC who is transported to another universe with semi god like powers.

He then acts like a five year old (not that he is five just that he acts like it) for the next 30 chapters while other characters are almost sometimes every once in awhile semi believable. That being said it is intertaining until your mind gives out.

Worth reading but can be improved.

Rather interesting story though at the same time extremely contradictory. For a sci-fi to fantasy style adjustment, it doesn't hold much to the challenges faced between a change in scenarios and it appears that the sci-fi setting is used mainly as some toss out prologue.

The style of the story... It feels like the MC is selectively murder hobo. Kills ghouls on site because they attacked him yet spares everyone else? Really?

Baring that, the story has a very decent flow to it and the plot itself works given that the MC is overpowered yet isn't portrayed as existentially overpowered... Yet. The story in essence however, is common isekai trope.

Grammer as I rate it is once it is readable, it's good.

Character takes a hit mainly in that it appears that the characters have limited capacity for learning and logic. This generally paints a narrow creativity perspective for the author and may lead to redundant situations later on as the author tends to constantly recreate scenarios to continuously feed a characteristic archetype rather than evolve it.

Currently, the overpowered nature of the character feeds into a shallow in world mystery which is basically what you will be reading this novel for.

Overall, if the author finishes this novel, a second look over would massively improve upon the characteristic flaws.

This is gonna be fun

I think this is gonna be a damn good story. You've made me laugh, you've made me emotional, you've left me trapped in suspense.

Our MC is obviously powerful but there's tricks to his new condition. He's smart, or crafty might be a better word because he doesn't seem particularly intelligent. Willing to be benevolent but clearly has no aversion to violence, we've got a nice well rounded protag this time around. I truly look forward to seeing where this story will take me as I'm expecting a lot from this.

28 chapters in and all I can say is good things about this novel. I like how the MC didn't just start out OP and knowing all his abilties, he has to slow learn how to use his abilities and in the end figure out exactly what he really is. Overall I have enjoyed what i've read so far and can't wait for more!