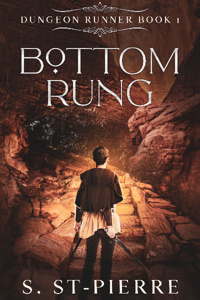 Tibs is a street rat caught for the most understandable of infraction, picking a pocket, but instead of losing a hand, he’s sent to a new dungeon and told that he’s lucky.

Now, on top of having to survive running the same dungeon over and over as people he gets to know die around him, he has to make sure the enemies he makes don’t also kill him. Then there’s guild politics to navigate as people inside the organization that sees them as nothing more than food for the dungeon starts paying attention to him.

What’s a street rat to do when the odds are against him, friends seem to come with enemies and enemies just keep surviving the dungeon to make his life difficult?

One thing’s for sure, Tibs isn’t alive today because he’s in the habit of giving up.

Before I get into the thing that stops me from being able to enjoy this, I will say that it isn't bad. The characters are realistic enough - the MC seems to have some decent emotional depth and deals with trauma in a way that actual, real people would. Some of the down-time that the MC has is very, very glossed over though - we only really ever see him training, entering the dungeon, or buying things to enter the dungeon better next time. This isn't necessarily a bad thing though, as that's really what the story is focused on. The overarching idea of The Guild (read: Corporation) trying to shaft everyone by throwing them into a meat-grinder of a dungeon for their own gain isn't cutting edge and new, but it's done in a novel enough way that I'm not bored when reading.

The big, big problem however, is the grammar. Spelling errors happen regularly, and in some cases I've strugged to figure out what the word is meant to be. It makes it very, very hard to enjoy reading this story when every chapter you're jarred out of any rhythm or flow by trying to figure out what exactly the author wanted to say as opposed to what they did. A proof-reading or beta would do this a world of good.

It is good for what it is. The book is from the kid's perspective so it might not appeal to all. I enjoy it. I think a lot of the reviews are overly negative. If you want an underpowered gritty story this fills that niche. Give it a try. Cheers.

It was a nice read if you want a real underdog protagonist. The problem is the MC doesn't have the determination to strive for to become great or do better, all he does is train, not train harder. He's still a child so it's fine. It has great potential, honestly it's fine to do some little additional cliche things just don't overpressure yourself to do something unique and I think it'll become something better. I just hope he becomes something like a balanced character not someone all speed because that's just illogical.

This one is easy and read and enjoy if you aren't the type to sweat the details.  For example, there are classes in this world, but there are no blue boxes, and absolutely no discussion of what the classes actually do for the delver.  Its just sort of implied that they make you generically better at the tasks that have something to do with the profession.  There are no levels, but tiers that you progress through for mostly unspecified reasons, that I guess just make you better at your class?  The magic progression is handled a bit more clearly.  Anyway, my point is that none of this interferes with the story, which is good fun, but if you need tight plotting or proofreading, this isn't the right one.

Despite some of the characters being an ass, this book more or less near perfectly describes the human society and kinds of people in it. Or at least I find it so. Grammar is good(I didn't find any glaring mistakes), plot is pretty fast with dungeon run where half of the characters we meet die, so don't get too attached to anyone other than MC and the world building makes sense.

It's a classic epic fantasy with dungeon crawler spice. I'm loving this the world building is amazing the characters are great and the story is interesting what more could you ask for. I like how the guild feels very authentic and the main character tibs is on point he just is a very well rounded character the author could of easily gone the easy route with anger that many authors fall into but he is written very well. This is going to be a gem of a good book when it's all finished and edited and sparkling because it's already very entertaining and I can't wait to read more and then the next one and the one after that so on and so forth.

This story is a refreshing take on the genre. Very light on the litrpg elements so far. Grammar, spelling, and story telling style are all good. This story can be somewhat slow paced compared to others in the genre, but it fits the story.

If you are a homophobe this is not a story for you.

Really Good Book, Give me more!!!

It is a really good so far, I want more, but I can't get any😥 get a patron please.

The main character is well thought thru. You can see how being a street kid influences every thing he does.

The book is not really litRPG other than the classes. But the systems is a refreshing take one something old.

I gave it 5 stars because royalroad has way too many books with 5 stars that don't deserve it, but this one does.

Cant really say anything about grammar, because I am dyslexic. It is not my field of expertise....

Good book, new take one something old, great characters. Got me hooked so I wrote a review for morechapters, and maybe a patron for 1 or 2 more chapters. please, pretty please GIVE ME MORE!!!!!!😡

OK Story which can be better

Story: A corporation finds criminals from prison, trains them and equips them for dungeon diving. The catch is that they have to pay the guild back afterwards. The guild is portrayed as evil and controlling because of this. However, in a magic based world, where knowing magic is first step in a ladder, this cannot be seen as too big a problem. The MC is not literate, has no idea how money works (and doesnt bother to learn) and yet is depressed and fixated on this. The training the guild provides for free at the beginning is hardly mentioned. The focus is mostly on the slice of life aspect (which is not there in the tags). The action, adventure and dungeosn aren't well explored. The magic system seems easy enough which makes me wonder why it isnt exploited at all.

Grammar: Too many typos, silly erors, tense issues. The sentences exist and there is no flow when it comes to reading a passage. Can be improved after proofreading though.

Characters: The MC has eough depth for a story, though seems like a tragic backstory was inserted in the middle to give him a drive which he sorely lacks. The MC however, after surviving in the streets (Which if the reader forgets, is reminded once every para), is not individualistic and is easily trusting. The side characters lack depth and flavour. All of them comes from either one mould or the other. Either they are stupid and cruel or they are kind and loving. A different mix doesnt seem to exist at all. The author may have had plans for the characters, but that isn't obvious to the reader. In the recent chapters, the focus of the story shifteed to developing roamce between two side characters while neglecting all the others. The main plot became slow, the other character became a cutout, no interaction with mentor and no delving.

Style is ok. The paragraphs however are too short which makes it difficult when read from a PC. There are no good descriptions of surroundings. The conversations sometimes seem one sided like in xianxia, though that has improved.

Too much negative, too much trauma

I realized it wasn't really enjoyable to me. The MC is a child, so the childish revenge thoughts might be appropriate but "I want revenge on nameless guards who raped my mother as she was sick and dying in a nameless city I don't even know how to get back to" just isn't going to happen. But we get to hear about it a lot...

Similar with "Someone shouldn't have told me I have to pay for all this training and work off my education to the guild, now i'm depressed and fixating on it"..Guess what, here we call that "student loans". The kid is being trained by a guild as a rogue and taught magic, that normal people don't get a chance to learn....but having to repay that is evil and he hates it.

Finally, the fact he can't read, and can't count is just annoying.. He can solve intricate logic puzzles, traps, locks....but doesn't know how much 15 is.