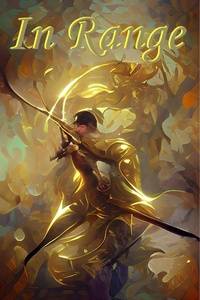 “Remember when you said 'In your dreams Odelia, this will take me 5 minutes.' Can you tell again how long it’s been already?” Odelia asked, amused by me missing another shot 100m short.

“That joke is getting old Odelia.” Frustrated and drawing another arrow from my quiver.

She chuckled a little, “Sorry Eyes, but it is hard to come up with new ones after spending 30 minutes making jokes already.”

“Well don’t worry, this one is for sure it.” As I released another arrow, but accidentally aimed it too high and the wind blew it way off target. “That doesn’t count.”

Odelia laughed, “I can spend all day being thoroughly amused by this, but I know you really want to try your hand at my combat test, and do not wish to fail the challenge here.” As she grabbed the bow out of my hand. “So let you show a little trick Shame can do.”

“A trick? What are you talking about Odelia?” Confused by what that she meant.

“Well as I have been telling you the last few days, Shame is not powerful enough to make the shot, which is why I told you to buy a stronger bow yesterday. Too bad your affection for that shameful bow of mine, and your stubbornness to buy the one I suggested is causing you to fail right now, but luckly for you I came prepared.” Watching Odelia rummaged for something in a satchel she brought.

“Hey, you saw the bows at the shop you showed me yesterday, all the ones better than Shame were too high a level for me, and the one you suggested didn't feel right when I tried it, at least when I compared it to Shame.” Odelia then pulled out 4 medium sized corked vials of red liquids from the satchel. “What’s that? Is it a healing potion?” I asked enthusiastically, not seeing one in the world yet.

Odelia chuckled, “It really impresses me how little you know of the world, Eyes.” As she began to unstring Shame, then lightly digging one end of the bow into the ground, and making it stand on its own. “And no, these are not healing potions.” Uncorking all four vials with her mouth. “Have a smell, take a guess what it is.” Putting the vials to my face.

Taking a quick sniff, I immediately knew the slightly metallic smell of the red liquid. “It’s blood, but what are you doing with it?” I asked, curiously.

“I asked Shurjss to procure some knowing that you would most likely be failing with Shame today.”

“For the bow of course, it will allow you to increase its strength, making it powerful enough to land the shot.” Odelia then poured each vial of blood, one after another onto the standing unstrung bow, and we watched as the blood slowly dripped down the black coloured wood of the bow.

Watching closely, the wood began to move and creak on its own, the blood strangely disappearing within the wood, and the bow growing in size. “Odelia, what’s happening? What kind of blood was that?” I questioned, continuing to watch all the blood disappear.

“It was just plain and ordinary elf blood.” Then explaining, “What you are seeing now is the unique property of Blood Wood, and how it drinks bloods to grow and strengthen itself.” And as all the blood was now gone, Odelia quickly strung the bow again. “Though it will revert back to its dried out state in about 5 minutes, so I suggest you make the shots in that time unless you wish to feed it some of your own blood, because I did not bring any more vials.” Passing the bow back to me.

“If it needed that much blood for just 5 minutes, I don’t think I want to be feeding it my own blood.” I replied, grabbing the significantly heavier bow now.

The bow still had the same recurve shape as earlier, only growing in size and weight, but the wood grains that were black in colour before, were now a blood red colour. And wanting to know if the stats for the bow changed, I read them and saw that there was a timer by the new name, and that only the attack and strength requirement both increased.

Effect: Increases damage by 1% the closer you are to the target, up to 30%.

“Interesting, this is like the time with the crown, an item having a hidden effect not written in the description. I’ll have to remember to ask if there’s a way to find out an item’s hidden effects.” I noted to myself.

Then not wasting anymore time, I drew an arrow from my quiver, positioned myself back in front of the target, nocked the arrow, pulled the bowstring back, took a deep breath, and aimed carefully. When I had my shot aimed, I released the arrow, and the loud echoing sound of Shame firing was the loudest I’ve ever heard it. The sound was so surprisingly loud that I saw the people in the area jump and flinch from it, as they all turned their attention to me.

“Well done Eyes.” Odelia applauded. “Now do that two more times and you should learn Sniper Shot, and if you do not, you will have to keep trying until you do.” She then came closer, and whispered very quietly “Then all you would have to do is show me you have learned it, and I will consider you a Long Range Archer.”

“Nice, let’s do this then.” As I confidently shot another arrow the same way, and like before it struck the target. “That’s two.” And without hesitation I fired another, this time the arrow flew slightly off. But with the arrow still barely hitting the target, I said “And I guess that counts as three.” Reading the new Skill.

You learned the skill Sniper Shot.

Sniper Shot: A long distance shot that deals more damage the further it has traveled. Cost 88 stamina. Damage based on Strength, Distance traveled, and skill level.

Immediately showing Odelia, I used Sniper Shot, and without even needing to account for the distance and arrow drop, the arrow flew straight and true, and pierced half way through the wooden target. “Was that good enough?” I asked insistently, noticing that more people were arriving in the area, and that my extremely loud bow was bringing a lot of attention to us.

“It was.” Odelia smiled proudly. “But before I congratulate you, why don’t we leave the area, I’ve noticed some very curious eyes watching us.”

“Yes please, I felt the staring eyes too.” We then both quickly made our way out of the area, and a few moments later a familiar notification popped up.

‘Blood-Filled Shame’ has been unmodified back into ‘Odelia’s Shame’.

“So the blood counted as a modification? I’ll have to discover other strange modifications later.” Following Odelia’s lead.

“No one is around now.” Odelia said, while we continued to run. “So I would like to congratulate you on becoming a Long Range Archer, but with knowing 2 Styles, you really become a Dual-Style Archer instead.” As a bunch of notifications then popped up. “I know this was a little unconventional telling you this while we run, but we are still quite a ways away from where the location is.”

“No worries Odelia, as long as we make it to the Dungeon in time.” Reading the numerous notifications as I ran.

You have met the required conditions to become a Dual-Style Archer Class, but as it is a 3rd Promotion Class you will not be gaining the 3rd Class Promotion Stat Increase until the required Level is met.

Congratulations, you have been promoted to a Dual-Style Archer Class.

You learned the skill Deadly Range.

Deadly Range: The longer the range of the shot, the more damage is done. Gain 1% bonus damage to your arrows, per 50m of distance traveled by the arrow.

Long Range Archery: One of the 3 pinnacles of archery, this Style provides the Range and Accuracy needed in becoming a Trinity Archer. Complete Mastery is required for combining the 3 Styles.

You have gained the title ‘A True Long Range Archer’.

And finished reading all of the notifications, I used Sprint and we picked up the pace.

“My combat test is to beat a single monster in a Dungeon?” I repeated, thinking “That sounds too easy.”

“It is.” Odelia answered. “But remember, you can only use the Combat Style to do so.”

“And it doesn’t even have to be the Boss of the Dungeon?” Making sure I heard her right.

“Unfortunately, you would likely not survive any encounters with the current Bosses in the Dungeon right now.” Odelia stated. “And I am even unsure that I myself would survive, depending on the Boss of course.” Sounding completely honest.

“You can’t be serious right? And what do you mean ‘Bosses’? Just what kind of place are we going to?” I questioned in concern.

“I am dead serious, Lord Eyes.” Odelia looked me directly in my eyes. “And the place we are going is called the Blood Dungeon.” She then smiled, and said “But there is no need to worry about Bosses, we will just be fighting monsters that live at the edge of the Dungeon.”

Having traveled for hours and trying my best to keep up with Odelia’s fast pace, we were suddenly hit by an intense horrid stench of fresh and drying blood, making all the air around us smell metallic and irony. When I looked to Odelia, she was unphased by the stench and continued forward. We ran for a few more minutes, and then I saw it, where all the stench of blood was coming from, the Blood Dungeon.

The tree line of regular 100m tall trees around us, with green leaves on top and green grass at the base, was unnaturally changing ahead of us. Almost making a clean straight line, the grass turned from a bright green colour to a blood red colour. The trees were half the size, having bark a darker black colour than my bow, and spiky leafless branches that grew all long the trunk and protruded outward. The leaves above were the same blood red colour as the grass, but as we got closer I noticed that they were exerting blood coloured droplets that slowly dripped in the area under the tree. And as we crossed onto the wet blood grass, the Dungeon message appeared.

You are now entering a Lv 100 Open Dungeon.

Your regeneration is now halved.

But before I could question Odelia about the ridiculously high level of the Dungeon, we heard someone loudly yelling for help.