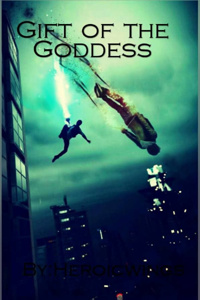 Gift of the goddess

It had been a week since the Jormungand attack. The military was called in to assist the police in the investigation of what they're calling ‘the light’s in the sky incident'. We were put under martial law, and have a strict ten PM city-wide curfew. Plus the entire downtown area has been condemned for investigation.

Rushon decided to stay for a little while and investigate the investigators. So he's been assisting Donum in making sure they're not coming close to guessing me and Zack’s identity. Donum even managed to get us some papers that excuse us for being out late, something about us working late at a fake address. The number for our boss directly calls Jack, but I'm hoping it never comes to that. I don't trust Jack's acting skills.

Valentina and Alexis have been interrogated by the authorities over and over again. They decided the best solution was the truth, just the truth minus Jormungand. They pinned most of it on Alexis father trying to kidnap her because she ran away. And Valentina came in to save her with the power of science!

So, we've decided to just lay low for a little while. Do our best to not ruin their

stories, and pray Donum and Rushon can ruin the investigation.

"Any luck with Vergil?" I asked Leo.

Leo didn’t say a word, he just stared at the boulder before him. The wind whistled through the trees and sent a gentle breeze our way. Making Leo's golden locks fly in his face, right before he started punching the boulder. Which cracked on impact.

"That whiny little idiot is sitting in that abandoned building sulking!" He started punching the rock more rapidly. Sending shards all over the place as he abused it. "He barely even eats! He just lays there like he's ready to die! But he's too chicken to die! As if that's a bad thing!" He leaned his head back and a huge fireball shot out and obliterated the boulder.

Leo huffed as smoke rose from his mouth.

I hesitated, but I walked over and put my hand on his shoulder. I yanked my hand back immediately however, because it felt like I touched a stove.

"Well, how are you feeling specifically?"

"I don't understand it. He's so illogical! What does sulking solve!? What does hiding in an abandoned building do!?"

"I can relate to your brother, kind of."

"Well please elaborate." He growled and smoke rose up from his lips.

I chuckled nervously and leaned against a tree.

"It’s really hard to understand unless you’ve been there before. Which is why I can understand him. I was that way after I got kicked out of martial arts. There were just some days where I'd lay in bed all day. I wouldn't eat, I wouldn't drink. I just get up to use the bathroom."

"But why!? That did nothing for you right? So why would you do it?"

“Hhmm, It just felt like the world was against me ya know? Like no matter what I tried, the world was just gonna spit in my face. So I didn’t even want to try.”

"When I feel like lifes beating me down, I tell life it hits like an old hag. So I guess I half get it.”

“Ya know, it’s not technically a bad thing you don’t understand him. Sometimes we just gotta accept that’s just how some people are.”

"And how the hell is that gonna help me!?" He snapped. "I don't think I need to respect his depression! I need to-"

"Then admit that you're probably not someone who can help him. You can be there for him, but you don't know how to help someone like that. Someone who feels on a deep level like him."

"You saw how well that went already, Leo. This isn't a job for you or me. So I called someone who might be better at this than us." I hummed.

"You'll see, she said she'd text me once she arrives."

Leo folded his arms and squinted at me.

"Why do I have a bad feeling about this?”

She ran over to tackle Leo, and he immediately shot up into the sky. His dark red wings stretched out as he stared down at her.

"I knew I had a bad feeling..." Leo huffed. "And where the hell’s the treasure chest you owe me?"

The wind coiled around Elizabeth's feet, and she leaped into the air after him. He wasn’t adapted to flying yet and she easily snagged him in the air. Then they started to zoom around like a broken jet.

Leos screams of rage eventually evolved into random bursts of fire. While Elizabeth just laughed the entire time. The two flew around the abandoned island like a kicked-over bottle rocket. They zoomed around and around, until they started heading down toward me!

I panicked and hastily summoned armor over my body. Just when I was about to brace for impact, a huge gust of wind came in. I saw a dark green blur, and suddenly Leo and Liz were separated. They crashed into the ground, and Rushon landed in between the two.

"So, this must be Elizabeth of the seven swordsmen." He mumbled.

She sat up from the ground, then leaped toward Rushon. A huge gust of wind came in from both sides, and I could barely keep my eyes open. It was like the two were fighting tornado to tornado. The wind around Rushon exploded and he fell back. His hood flew from his face, and exposed his bewildered eyes.

"How did you disrupt my current!?" Rushon grumbled.

"The queen of the says must be able t' rayd the woind roigh'? Aw else we daon't knaow wheah the sheeps gawnna gao!" She gave him a smile, which seemed much more like a challenge than anything else.

Rushon didn’t falter however, he just stared intensely back into her eyes.

"I can see past your tricks."

Elizabeth smirked and backed off.

"Tatakai!" I heard screeched from above.

When I looked toward the sky, I was met with deranged creamy eyes and a blade. I used my strength and increased my movement speed, then grabbed my Ascalon blade. Just barely guarding against Weislungs attack.

A sadistic grin etched itself onto his lips, and his blade was slowly consumed by his holy white flame. I released the energy in my blade and coated my sword in an azure fire. I didn't think it was possible, but Weisses smile grew even wider. Then I sent the energy out after him! He seemed to have the same idea, because both of our blasts collided at the same time.

I was sent flying and crashed against the ground. I rolled back and popped back up on my feet, and I saw he barely moved at all.

"He basically said, he wanted to see how strong you've become." Leo translated and walked over to me.

Of course, he knows japanese...

"That sounds like fun to me. But first, we should focus on the task at hand. Leo, can you translate?"

Weis’s eyes grew wide and he pointed his blade at Leo's throat.

Leo grabbed the blade and stepped closer to him and glared into his eyes.

The wind picked up and within seconds, Rushon was in between them.

Rushon quickly held up what looked like his phone. Then this robotic voice started talking.

"And Stryder didn't ask for you to call him a mutt either." Rushon huffed.

Weis nodded then leaned into Rushon.

Rushons eyes got wide, but he nodded. He typed on his screen and then the robot replied.

Before I could even react, some beast crashed into me! I groaned as I hit the ground and my eyes met the sea. She stared down into my eyes and gave me an enchanting smile. Which made my heart skip a beat.

Come on Stryder, focus on the task! Say something!

Seriously, why do I even exist? Her cheeks became scarlet and she giggled.

"Ih' fayls good t' knaow Oy cahn steell myke yoah wehds jumble. Even if Oy'm nawt the one yah wahnt." She mumbled the last part, which withered my nervousness away.

She then promptly popped up on her feet with the wind. Then looked off into the distance at the abandoned buildings.

Bio: Welcome to my fantasy land were we have a squirrel named NutterButters who can bench press the Hulk. And a boy named Nick whose the son of Santa, who wants nothing more then to beat the tare out of his dad.&nbsp;

This is just taste of my connected universe.&nbsp;

If you happen to be a fan of my book you can follow me on Discord!