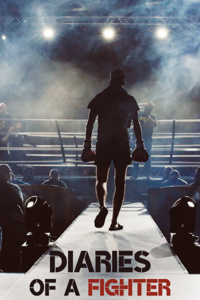 Diaries of a Fighter

After the sword training I didn’t see or hear from K. Safe for the dinner at the dining house, I remained in my room for the rest of the day, sulking.

The next morning I woke up early and went jogging, following K’s interval program. I ate a Japanese breakfast, just as she suggested, and afterward waited in front of the dining house for quite some time, hoping she’d come by. I called her. No answer. Time passed, I called her again, and then again after twenty minutes. Each time a female voice rattled off an automatic message in Japanese.

I didn’t even attempt to go to the gym alone, and since she didn’t answer the phone, going to look for her in her room would have been useless as well, as I wasn’t on the damn list of allowed visitors.

Lacking further ideas, I walked back to my sleeping quarters. The rain started to fall again, it had been on and off the whole morning, and I got wet by the time I reached my building. I grabbed a can of coffee from the vending machine I sat on the wooden porch by the entrance. Staring at the gravel courtyard I sipped the liquid and watched the rain droplets smashing against the small, white stones. A thin stream of rainwater began pouring from the edge of the roof, splashing over the top of my head. If I moved just a bit further inside I’d be sheltered by the roof, but I stayed put. It was a sort of self-punishment, pitying myself in my solitude.

Did I have to be so damn confrontational…she had a point just there, all those weakness she mentioned--

“Hey man, you okay?” James stood at the entrance, holding an Adidas sports bag in his hand. He probably returned from his training. A proper training, in the gym, that he and his co-fighters had. “That water is dripping right on you.”

James shrugged and entered the building, but came back right away. He walked over to me, staying safely under the roof.

“How’s the training going?” he asked.

I chuckled, bending my head down. “My training, ha! You should ask my proxy…if you find her…and if she’s sober enough…”

“Why are you like that? You’re damn lucky to have K as your proxy.”

“Lucky? You fucking kidding me? She’s terrible…she’s simply terrible. You are the lucky one…with Yamada.”

“Oh yeah, Yamada san is great. But, man, K’s cool too. She’s much closer with the clan boss than Yamada or even his nephew. That speaks for itself.”

“Does it?” I turned to him with a sceptical look. “Cause’ I don’t see it or get anything from that. Hey, here’s a question. Do you think Yamada could take me as his fighter? I saw he has few foreign fighters besides you…”

James shook his head, his lips pressed together. “I doubt it, man. I never saw fighters changing their proxies. If your proxy cast you out, usually that means you can kiss goodbye your career at Yamato Damashi for good. There are no second chances. So you better be good and stick to your proxy.”

I finished my coffee and squeezed the can in my hand. “Right, what was I thinking…a bit of flexibility is considered a sin around here…they’re all so fucking rigid.”

James laughed out. “Finally, you’re starting to get the hang of it. Still, I think you’re wrong about K. You know, she does understand fighting. I got some good tips on how to improve my technique from her.”

“Did you…” I shrugged nonchalantly.

“That she’s taken you as a fighter like that, man, you should be grateful. We all had to struggle to get accepted, prove ourselves in fights, and some of us paid a lot of money. And it took time too. But you, man, what did you do? From what I know, we kicked your ass, as we’d do with any other wanna-be Yamato fighter that doesn’t follow the standard procedure, and nobody expected to see you again. Instead, you become K’s fighter overnight. One of the reasons why everyone’s looking at you sideways.”

“You still don’t get it. She’s the person closest to Fujiwara. I bet she can get you any fight just like that.” He snapped his fingers.

“She can’t even get me into the gym,” I mumbled quietly to myself.

“Nothing…Tell me, have you met any of her fighters before?”

James stuck his hands in the pockets of his jeans and turned his stare outward. “No. You’re her first, as far as I know.”

I looked at him, my mouth half-open.

I slowly shook my head.

“Well, now you do.” He tapped me on my shoulder and spread his thick lips wide. “Hah, don’t you feel special now? See you, man.”