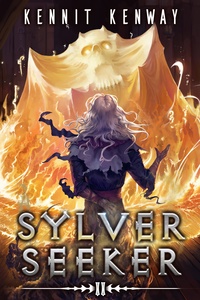 Spring and the other shades had to help Bones get onto the wolf and then had to wrap him up in one of Sylver’s extra robes. The connection was perfectly stable, but it turned out Bones was moving around because he was using his soul to puppeteer his body. As they walked back through the passages, his ability became less and less, down to the point that he became as immobile as Flesh.

Sylver walked slowly and carefully, with shades constantly moving around him to trigger any traps that might have been left untriggered when he made his way through here before. Several had rearmed themselves, but the vast majority were inactive.

The walk from the triangular platform to the area where Rosa, Flax, and Basil were, was surprisingly short. Sylver already had an inkling of an idea as to how to explain Flesh and Bones away but was still working out the details.

Rosa stared him down. Flax had a hand hidden behind his back, presumably where he kept a throwing dagger, and Basil looked just short of delighted to see him.

“You found it? Show it to me,” Rosa said. Her tone was odd, somewhere between threatening and threatened.

“It’s near the entrance, but I would like to ask for your assistance first. If there are any elves guarding the entrance, I want safe passage for myself and the people I’ll take with me. You put aside who started it, who killed who, and you go your merry way with the flower in hand,” Sylver offered. He may have imagined it, but he thought he saw the edge of a smile tug at Basil’s lips. A masked frown formed on Flax’s while Rosa stayed perfectly neutral.

“This is a take it or leave it trade, the flower in exchange for safe passage. If you have any grudges I won’t ask you to forget them, but I ask that you hold off from doing anything for now. Afterward, it’s none of my business, and none of my concern,” Sylver interrupted. Now he was sure Basil was smiling, but hiding it very well, while Flax was trying to kill Sylver with his stare, and Rosa looked taken aback. It was the same expression she had back when she killed that warrior and Sylver left them.

“But they…” Rosa started to say with a loud voice, which went down to nothing by the second syllable. “We accept your terms. And… I would like to apologize for how I acted earlier. I would like to blame tiredness, loss, and a bunch of other things, but I was in the wrong,” Rosa said. Sylver thought it was strange that she was saying this now, even if he could feel she didn’t mean it.

But he was hopefully never going to see her again, so he decided not to make an issue out of it.

“I accept your apology, but this doesn’t change the fact that you betrayed my trust. I’m going to keep the flower close at hand once I have it, and I’ll give it to you once my people are out of the crypt and the elves at the entrance are far enough away,” Sylver explained. Flax’s mouth opened the smallest margin, while Rosa and Basil simply nodded.

His shades went ahead, behind Rosa, and continued to make their way back through the crypt, looking for traps.

Bones had to mime his intention, given that Sylver had asked the both of them not to speak in demon tongue around others. Even whispering in the language was enough to make the people nearby shiver from the nearly silent sounds. Writing was the same, except the letters could only be written in blood, and would whisper their intention if one were to put their ear close to them.

Bones was moved until he was touching one of the walls, and after a few seconds of contact, the wall fell away to reveal a rusted flail stuck in the ground. Sylver felt the man’s mana brush over his back and understood what he was trying to say as the [Spear Of Shriveling] was pulled out of his robe.

Sylver directed Rosa, Flax, and Basil to stand inside of the teleportation framework, and had Flesh and Bones carried by two swordsman shades. No one commented on the fact that Sylver had two limp bodies with him, and Sylver refrained from explaining. He had Flesh and Bones hold hands, with a hand placed on Sylver’s arm, while Rosa, Flax, and Basil held hands on the other side.

Sylver tentatively reached out with the [Spear of Shriveling] and felt the magic beneath his feet activate, as the spear disappeared from his hands.

Sylver acted entirely on instinct, and that he was ready for it this time. He head-butted Eliot so hard in the mouth, he was all but certain he saw teeth fly away. Eliot groaned with a hand over his mouth, and blood and pieces of cracked teeth were spat out between coughing and retching, while a woman dressed in a white and red robe rushed over to heal him. Sylver spoke while his eyes were still half-closed and blinded.

“Good news everyone! We can all go home!” Sylver shouted. A few heads turned, but the majority remained focused on what they were doing before.

Bones reached out with a shaky hand towards the wall of darkness behind him, and the large room filled with a gale-like wind as the wall that blocked the way to the exit disappeared.

“There are, however, a couple of things I’ll need in exchange!” Sylver shouted. This time everyone looked towards him. He wiped with his sleeve at the gash Eliot’s teeth had made on his forehead, and tightened his skin around it until it was all but gone.

“How are you doing this?” Edna whispered. Sylver continued to pretend to work on the wall, while Bones just so happen to touch it a short distance away.

“My unique class is very powerful, especially in situations such as this,” Sylver explained with a smile. Going by the fact that Edna looked more pissed off than before, she wasn’t buying it.

“Alright, it isn’t that, but I can’t tell you,” Sylver said.

“Is this more of that ‘there would be zero benefit to either of us and potentially great harm to me’ business?” Edna asked. She looked slightly concerned, more so when Sylver’s face lost a portion of its smile.

“Yes. And just like last time, I need you to trust me on this. No good will come out of you knowing about this,” Sylver answered. Edna still looked concerned, but she was now trying to hide it.

“And her?” Edna asked. She gestured towards Rosa and the other two, who were standing so perfectly still they might as well have been statues. Eliot was silently teleporting around the place, experimentally opening and closing his jaw as he did so. He saw Sylver looking and glared at him before teleporting out of sight. Everyone was packing up, and Eliot was supervising.

“Long story, but unrelated to this. I was considering leaving them down here, but we need them with us in the event the people outside are elves…” Sylver explained. Edna said something, but he couldn’t hear what she had said as an upsetting thought came to him. She repeated her question but Sylver now remembered how Rosa had reacted when he first talked to her.

“Sorry, what?” Sylver asked, forcing himself to look at and pay attention to Edna.

“You do know who that is right?” Edna asked.

“In a sense, I’m fairly certain they gave me nicknames or something of that nature,” Sylver answered.

“Since you asked, I take it you recognize them?” Sylver asked.

“Her? Of course, why do you think Eliot was so quick to back off and accept your terms?” Edna asked.

“Because he threw up on himself from swallowing too many teeth and I threatened to castrate him if he ever touched me again?” Sylver asked. He didn’t like where this was going, he was tired of surprises, and didn’t like Edna’s careful but uncertain tone.

“You really don’t pay attention to politics, do you?” Edna asked, she crossed her arms. Now Sylver didn’t like the way she was smiling.

“No, but please get to the point because my imagination is already running rampant at the possibilities,” Sylver said. He didn’t like the way Edna smiled at this either, it felt predatory.

“Do you think you could guess? You’ll probably guess in three tries.”

“Or you could just tell me, and save us both the trouble.”

Instead of responding, Sylver turned into smoke and moved through the crowd of people. He appeared directly in front of Rosa and was staring directly into her eye. Flax and Basil both tensed up but didn’t move otherwise.

“Who are you?” Sylver asked. Rosa barely blinked as she took in the question and thought of a way to answer it properly.

“Our hierarchies are different from the human ones, but in their terms, I would be considered a princess. And once I bring what we’ve both discussed home, I’ll become the primary heir to the elven kingdom,” Rosa answered in a polite whisper.

Flax and Basil both leaned a tiny bit closer towards Rosa.

“Alright… I was worried it was something serious,” Sylver said. He couldn’t help but smirk at the collective confusion on the three elves’ faces.

That’s the second time I ended up helping someone move up the political ladder. Maybe more, if you count whatever it is the Cord ended up doing with all the favors they collected from the rescued nobles.

“You really didn’t know? I was so sure you were pretending,” Rosa asked.

“I’m politically illiterate by choice. Having said that, I’m adding a new condition. Forget about me, forget my name, and if people ask, make something up that doesn’t involve me holding you hostage with a dagger pressed up against your heart,” Sylver said. Rosa looked further confused.

“We accept your terms,” Rosa said. The way she said it made it sound like a question.

Sylver nodded and went back to pretending he was doing something to the wall of darkness, other than touching it and sending sparks of yellow flying when he felt like it. It opened up, and the large group moved another square towards the exit.