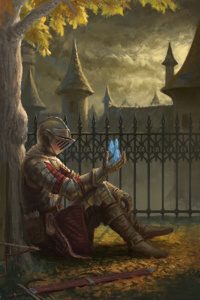 DISCONTINUED - I won't be writing more of this fiction. Check out the latest post for a worlbuilding summary / final thoughts.

Leaves of Terranthir is a gamelit blend of ARPG, action, fantasy, and slice of life.

It's inspired in part by some of my favourite games, borrowing in themes, sense of exploration, and aesthetics from the Soulsborne and soulslike genre, mixed heavily with arpg itemization from Diablo/PoE style games.

While many may remember their Soulslike experiences as nothing more than suffering, I personally loved the sense of progression, to prevail over challenges and monsters that seemed impossible to defeat at first.

If any of that seems interesting to you, do check out the first chapter and let me know what you think.

Cheers, and thanks for reading.

I'm Sorry... What's With These Reviews?

Alright. Let me start this off by saying STOP COMPARING THIS TO AZARINTH. It's a different story and it deserves to be reviewed as an independent fiction, not "Azarinth Healer but with X, Y, and Z"

It starts how any other litRPG starts, with some random dude awake in the middle of nowhere in his pajamas. Common? Yes. Boring and worthy of a 2.8 story score? No way! I think people need to give this story some time to develop into its own, because Rhaegar is clearly setting up a high power ceiling right off the bat. He even says in the description that it's inspired by the soulslike genre, and there's a big fat slice of life tag on top of it. I actually debated giving it a 4.5 myself, but I realized that I wasn't giving that tag as much weight as it deserved. This story is supposed to start 'slow' (slow in parentheses because there's already been a bunch of questions introduced and fights fought), because that'll only make the payoff that much more satisfying.

Alright, rant over. Now onto the MC. Is he a wimp? Not really, and even if he was, there's nothing wrong with that! This story seems to be all about a wimp slowly growing in power until eventually he can go head to head with the giants that once crushed him in a single blow. He's supposed to be afraid, because who wouldn't be afraid of getting impaled for the umpteenth time by cold steel? His backstory, while little, is weaved in nicely to give him a bit of motivation and character, and I personally think it's really cute that he's so determined to adopt that dog.

As for style, the descriptions are a little sparse for my taste, but that lends itself to the fight-heavy style that this story seems to be going for. The MC's thoughts are laid out in first person italics (like "Damn. I should have eaten that corndog while I had the chance") while the rest of it is in third person limited, and while I prefer going third person deep, this is once again just personal preference.

Alright, now for grammar. As always, my shortest section. There might have been an error or two, but not enough to distract me, and certainly nothing that makes it unreadable. 4.5, and I might change that to a 5 if it smooths out later.

Overall, just STOP COMPARING IT TO AZARINTH. If you do, I think you'll really enjoy this story. One thing I will say, though... we really gotta work on that cover, Rhaegar.

Reviewed at: Chapter 13 Preparing an Expedition

It's delightful as a slow burn lit rpg. Masterfully done.

however I am just unable to feel any emotion coming from the mc (between the lines). his emotional state is clearly stated and underscored several times. his human reactions to the situations very reasonable.

But i cannot smile with the mc, laugh with him, be glad for him or weep with him or be scared for him or anoyed at him, or the situation or monsters he face. I can read it but i cannot engage in it.

I'm in for the long haul

From these first 10 chapters I have gotten exactly what I wanted. Mystery, Action, a sense of progression driven by the main character, and most importantly, an author who strings these elements together in an expressive mannner.

This novel is definitely a slow burner, which so happens to be what I often look for.

The authors track record is of consistent quality, and I see no reason for this being any different, esspecially if they have a new bunch o' passion in this new project.

Leaves of Terranthir is a fantastic transfer of the themes that make the souls games so much fun from video game to written format. Rheagar understands better than most fanfiction writers that what makes the souls games special is the particularly grim atmosphere and the way that's brought to your audience.

Story starts off slow, but picks up steam as it goes on. Grammer is good enough where I did not notice any errors. Main character acts human, which is unfortunately rare for litrpgs. Story doesn't make stats everything and places a pretty big emphasis on skill and training. The story can be a bit dark sometimes, but I enjoy that so I don't mind. I personally love the story and would definitely recommend reading it.

A good start with potential

The story looks good, very promising, well written and with lots of unanswered questions (which I like). Progress is slow, but I think that helps getting in the shoes of the protagonist.

Although I havent played the game referenced by the autor, I think I know which genre he means. In my opinion game and book are 2 different things and I dont mind genre so long as the story captivates me.

Creeping dread, in the best way

I have read the authors other fiction for quite some time, and started reading this as I saw it mentioned in the comments there.

Truly, I love this fiction. The story pacing, while definitely slow, perfectly captures the claustrophobic fear that all of the SoulsBourne games have. Even better, the sense of displacement is present in spades. The struggles of the protagonist are wonderous in the terror and uncertainty.

I will go so far as to state that this edges ahead of Azarinth Healer, for me, in terms of enjoyment.

Keep this up, please. I love it.

It’s good, but not my thing.

I have only good things to say about this fiction. The grammar is flawless, the world is solid, and the characters may as well be real people. If you're familiar with Rhaegar's other work Azarinth Healer, then you can expect a similar level of quality in this fiction, although the two stories don't have a huge amount in common beyond the fact that both are written by Rhaegar, and Rhaegar is a wonderful author. Sadly, for whatever reason, I just can't get fully engaged with the story, and as such will take a break from reading it, in the hopes that the mindset I have will be more suited to this fiction in the future.

Mc acts human which is a fairly rare thing in litrpgs,

I really like the grim atmosphere if you were going for undead-burg vibes than you nailed it.

The focus on items instead of something traits or titles is fairly unique seems well done.

as of chapter nine, I have seen decent character development which bodes well for the future.

The story brings together two of my favorite things, dark souls style slow progression and learning through failure, as well as litrpg progression. If you are a dark souls fan, definitely give it a go. The story and style is very reminiscent of the haunted majesty present when you first see anor lando in dark souls, and see how far such a marvelous place has fallen. I binge read the story after seeing the cover, and it brings me back to the pain frustration and anger dying to shit outside of your control in dark souls, and then as you slowly learn and get better over time it brings me the same joy of overcoming what was once an impossible challenge. The character shows actual progress and growth, personally and stats wise, and the grammar is top notch. I am looking forward to the slow, methodical and gradually growth in skill. I love the pacing of the growth, its not too rushed, and feels very satisfying just to see how far the main character can come, while still being fallible and able to die to the simplest mob due to circumstances and lack of awareness. Definitely give this story a try if you enjoy gradual progression, and non op main characters.