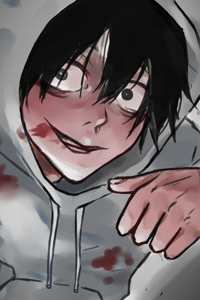 He remembered how small cracks formed in several places in the world. Those cracks, linked to the abyss, were the beginning of humanity's misery.

The very first crack appeared in the coastal area of Bali Island, sucking everyone in the vicinity.

The case shortly became a hot topic, as some American students got involved. The media published it as a mass kidnapping case and kept pursuing the story. It quickly turned into an international issue, sparking some debates and involving some countries to search for the missing people. Many on the internet made their speculations and turned it into conspiracy theories.

However, nobody was aware that it was only a tiny bit of what the world had gone into.

Inside those cracks were despair. Humans were thrown there as a trial. The stronger ones would survive, and the weak were gobbled down by the law of the jungle. It was a cruel world, yet nobody was complaining since they could only hold on to survive.

Lucas, who entered the crack quite early, had cleared all the trials. He stood as one of only hundreds of humans left in that ruthless conditions. However, it wasn't enough. Clearing the trials were only the beginning. His friends and comrades were dying one by one, getting swept by the "real" abyss.

Before he died, Lucas sold his soul in the hope of revenge. Even on his last breath, all he had was rage towards those who turned their life into a living hell. That was the sole reason the current Lucas had the memories of those bitter future.

A rough feminine voice called him. However, Lucas was preoccupied with his thoughts that he disregarded it. His devoid eyes started to be filled with passion again. Though, that passion was much darker than ever.

"Lucas, you should have told me if you are awake. I can't get a hold of your mother"

At the mention of "mother", Lucas finally turned to the voice. She was a middle-aged woman with wavy brunette hair, wearing thick glasses, and dressed in a casual outfit.

Did he know her? His memories were fuzzy. To him, more than thirty years had passed. He met many people, and most of them died halfway through his journey. Even if Lucas knew her, this woman might have been one of them.

"Are you okay? You just suddenly passed out in my class. Your desk mate called an ambulance and I decided to come here since your mother can't be reached." She said, looking worried.

Right. before Lucas entered the crack, he was still a college student. Then, she should be one of the professors. Now that he could think more clearly, he started to observe the surroundings. He was currently lying on top of a pure white bed, and his arm was pricked with a needle connected to an IV bag. He was definitely in a common hospital room. Looking down at his body, he saw his white shirt covered with dried blood.

"Your nose was bleeding. Everyone panicked since it was a lot of blood, but you seem to be fine now. Can you contact your family or relatives? Your mother isn't picking up her phone."

Looking up to the professor again, Lucas kept his silence.

It was because he didn't feel the need to answer her question. At this timeline, another crack should have opened in Singapore. It was found out way later since it was inside an apartment building. Both his mother and younger brother, who lived in Singapore separately to him, should be inside that crack by now.

But, there wasn't a need to tell that depressing story to this woman in front of him right now. Besides, who would believe him?

Perhaps noticed that Lucas behaved strangely, she frowned a little. And Lucas, who realized that the professor was starting to feel something was wrong, promptly showed his signature smile.

"No need to worry, Miss. She is probably still working.”

Hearing that answer, she sighed.

"Alright. Be sure to let her know about this since she might be worried. Even I get worried after seeing your condition lately. The doctor said you are exhausted and malnourished. I know you are trying to get a perfect grade, but don't push yourself too hard."

Lucas frowned a bit at that statement. Were they that close for her to show such concern? Remembering his college days, he recalled that he used to be a scholarship student. He used to talk quite a lot with some professors, and even his advisor personally knew his mother. She might be that advisor, looking at how she addressed his mother.

Lucas felt that it was quite funny. After all, he only approached them in order to be a model student. But in the end, it was all for nothing after he entered the crack.

"I will leave for now. Take care of yourself, okay?" She raised from her chair and left the room.

Lucas only nodded and smiled at her.

Now that he was alone, he quickly took out his phone from his pocket and started to browse through the news. It had been a while since he used a smartphone again, as his fingers were awkwardly sliding through the screen. He tried to look around for news related to the appearance of the cracks, but perhaps it was still too early. The internet was still full of news about those missing American students. Even the crack on Singapore, which supposed to have opened now, still wasn't known yet.

Lucas originally found out about the crack in Singapore about two weeks later. He remembered that he wept for weeks, as he didn't know whether his mother and younger brother were still alive or not. Even though he might look tough on the outside, they were still the only families he had left. But, the current him knew that both of them wouldn't survive for long. Among the survivors from that apartment building that he met later, Lucas knew that they both died early at the first trial.

They died so quickly, unlike him and the others who kept fighting desperately for thirty years. They surely didn't know the struggle to be alive in that horrific environment. They didn't even experience the constant fear of dying or the pain of being half-alive in the battlefield. They never felt the exhaustion, both physically and mentally, to the point they were pushed to sell their soul in the hope to make a tiny bit of change.

Did he regret that he didn't save his mother and younger brother despite knowing it already from his dreams? Did he feel remorseful?

If it was the old him, Lucas would have been broken. He wouldn't be able to bear the guilt and would blame himself forever. However, his heart and mind had already broken long ago.

"You guys better be grateful I didn't come to save you."