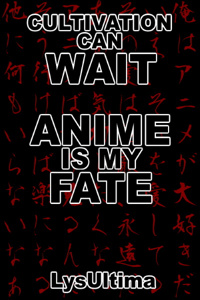 Cultivation Can Wait; Anime Is My Fate!

A few minutes after Riku finished cleaning up, Kato came back with the pill. Riku quickly forced it down the girl’s throat; the faster the pill was taken, the more effect it would have.

He let out a sigh once he saw her throat make a swallowing motion. Everything was up to the pill now. He turned back to look at Kato.

“Who is this lady?” Riku asked. He had an idea already, but it didn’t hurt to confirm his suspicions.

How many fiances in the world knocked out their fiancee on their first meeting? Talk about bad first impressions.

“Well, this is a problem. Haha…” Riku really did not want to get married. For one, having a partner around would naturally detract from his anime-watching time among other such inconveniences.

Riku didn’t really think any sane person would actually still want to proceed with the engagement given what had just transpired, but Riku also knew that his parents really wanted to have grandchildren. And unfortunately, Riku was his parents’ only biological child. Which meant that his parents probably spent a large amount of money to bribe his fiancée’s family and were more than willing to double or triple whatever enormous sum they paid just to get the marriage done and over with.

Riku had watched thousands of anime series. Although he never left the house, he had the experiences of a million worlds. Which actually meant nothing because anime was nothing like real life.

In fact, it actually hindered Riku. When he thought of ways to get out of the engagement, he had anime-like ideas such as: revealing that they were childhood friends and using that to… wait, that would lead to the good end. Plus, he had no childhood friends in the first place. He thought of accidentally falling down from the sky onto his fiancee… wait, wasn’t the girl supposed to do that? Plus, they’d both probably die.

He simulated hundreds of plans, but most of them made no sense and would lead the marriage to be even steadier. Riku then realized a fundamental problem of taking this approach: what anime protagonist tried to break out of an engagement? It was always the other way around!

Thus, Riku wasted precious time and only after taking his head out of anime did he finally come up with a solution.

Proud of himself for thinking of such an amazing plan, Riku laughed uproariously while taking the bottles and cup noodle cups out of the trash can. He found lemonade in the refrigerator to fill the bottles up.

His room made a huge transformation today. It went from being dirty to being clean to being dirtier than before!

Riku looked over his room proudly, and Kato looked at Riku like he was insane.

Riku, somewhat bothered by Kato’s gaze, shooed Kato off. “Alright, I can handle this from here.”

Despite Kato’s conflicted look, he left the room; an order from his master had to be followed. The last obstacle to Riku’s nefarious plan was cleared, and Riku’s strange laugh only grew louder.

Once he saw that Kato was completely gone, he Googoled anime hobbyist stores in his area.

Riku found one in less than a minute, a smallish store called “Otaku Tortoise.” It was close enough that he didn't need to use a map, and its Japanese name had “riku” in it, which made him feel a bit of an affinity to the store. A cursory glance at the shop’s website showed that it sold merch of Haruka-chan and a few of Riku’s other waifus, so he left the Shinosaki building and bought the store’s entire stock.

His preparations had only started.

When Chiba Chiyo woke up, she smelled the faint scent of an adolescent male. It was not a pleasant smell, so she immediately pinched her nose.

She remembered standing in front of her new fiance’s room before… nothing. What was she lying down on the bed for?

“Where am I?” she asked in a soft voice.

And, immediately, a lecherous voice replied, “You’re in my room, hehe.”

Chiyo looked in the direction of the voice and cried out in a mixture of surprise and disgust. There was a teen standing there. He couldn’t be called the ugliest man she’d ever seen, but it would really be a huge exaggeration to call him below average. It was said that clothes make the man, but this man did not have any clothes on in the first place. He was only wearing a pair of women’s panties. Perhaps just that alone was not enough to have made her scream in fright and back up against the bed frame. However, there was a small—but not too big—bulge protruding out from the panties which she faintly recognized that were of the type she normally wore. A pair of perverted eyes were staring at her; she couldn’t help but feel that she was being undressed.

“Hehe, you’re engaged to me now, hehe. I’m really lucky to be able to be with someone as beautiful as you, hehehehe,” Riku rubbed his hands and lowered his gaze to Chiyo’s nether regions, “When we’re married,” he paused here to do another deranged laugh, ”I’ll be sure to please you every day, no no no, three times a day, hehe, once in the morning, once in the evening, and once while you sleep…”

Riku continued to prattle on, but nothing he said registered in Chiyo’s ears. She only looked at him in horror.

And now that she looked closer, she could see that Riku was severely lacking in Yang and overflowing with Yin; such a condition could only occur from performing hand-to-gland combat hours per day. The panties he was wearing seemed to have some perfume lingering on them; they were worn by a woman before. And when she looked around the room, her suspicions were completely confirmed. Empty soda bottles, empty ramen cups, various figurines and anime hug pillows. She could even see a mysterious yellow liquid in some of the soda bottles and a white substance caked on the hug pillows.

She vomited on the spot.

“Y-You pervert! I don't ever want to be in the same prefecture as you! Our engagement is canceled! Canceled! Ugh, I hate even saying ‘our.’ It makes it sound like I’m grouped with you for some reason…” Chiyo couldn’t help but vomit again.

She really couldn’t stand being in this place even a second longer. Chiyo slapped Riku hard enough to send him flying and bolted out the door, out the Shinosaki building, and to the nearest train station to go back to her hometown.

Despite being collapsed next to the far corner of the room, Riku had a wide smile on his face. She left! She really left! And she even said she was going to break off our engagement! Holy shit! This is a huge victory for me!

“Hahaha… agh,” Riku’s laugh of triumph was interrupted by coughing; it really stank. To make it seem more authentic, Riku did the one thing he swore not to do—exercise—to produce a lot of sweat. Chiyo even threw up twice. The smell was so repulsive that his nose wanted to fall off after the first sniff.

Luckily, Riku was smart enough to buy a lot of air fresheners beforehand.

He took out the Extreme Yin Jade Magatama, an item that shattered Yang and replenished Yin, out of his panties, which he had bought at the otaku store. Riku didn’t know why the otaku store sold “Scented Panties,” but he wouldn’t complain. It was a nice finishing touch to his masterpiece. He cleaned the vomit from the bed and the milk-cornstarch mixture from the hug pillows. The lemonade in the soda bottles went down the drain, and the empty bottles and cup ramen went back into the trash. The hug pillows, figurines, posters, and various other items from the otaku shop were stored somewhere deep in the basement, in his personal vault. It was where all his valuables were kept, and the space itself was even connected with multiple spatial rings so that Riku could access it from anywhere in the country if he ever so needed.

He would dispose of anime goods later. Riku liked anime, sure, but not to the point of no return of having his entire room decorated with anime merch like the typical weeaboo. Actually, spending nearly twenty-four hours every day watching anime was probably the point of no return, but Riku would rather directly fund his several personal animation studios then wasting money on merch. Yes, some of the money went back to the studios, but the manufacturer, distributor, and vendor took most of the profits! It was simply not as efficient.

Actually, anyone who loved anime so much that they owned several large animation studios was probably several million lightyears past the point of no return.

To tell the truth, all the previous statements why Riku didn’t keep the figurines were just excuses to make Riku sound less like an embarrassing weeb than he actually was. The real reason he wanted to dispose of the anime goods was that his parents absolutely forbid him from keeping anime merchandise with the threat of artillery bombardment. If not for his parents' insistence, Riku would definitely fill several buildings with anime merch, which actually explained a little of his parents' reasoning right there…

In any case, Riku’s room was clean of trash, odors, and thots, so he went happily back to watching anime.