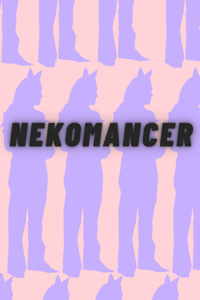 Nekomancer: Just A Touch of Catgirls 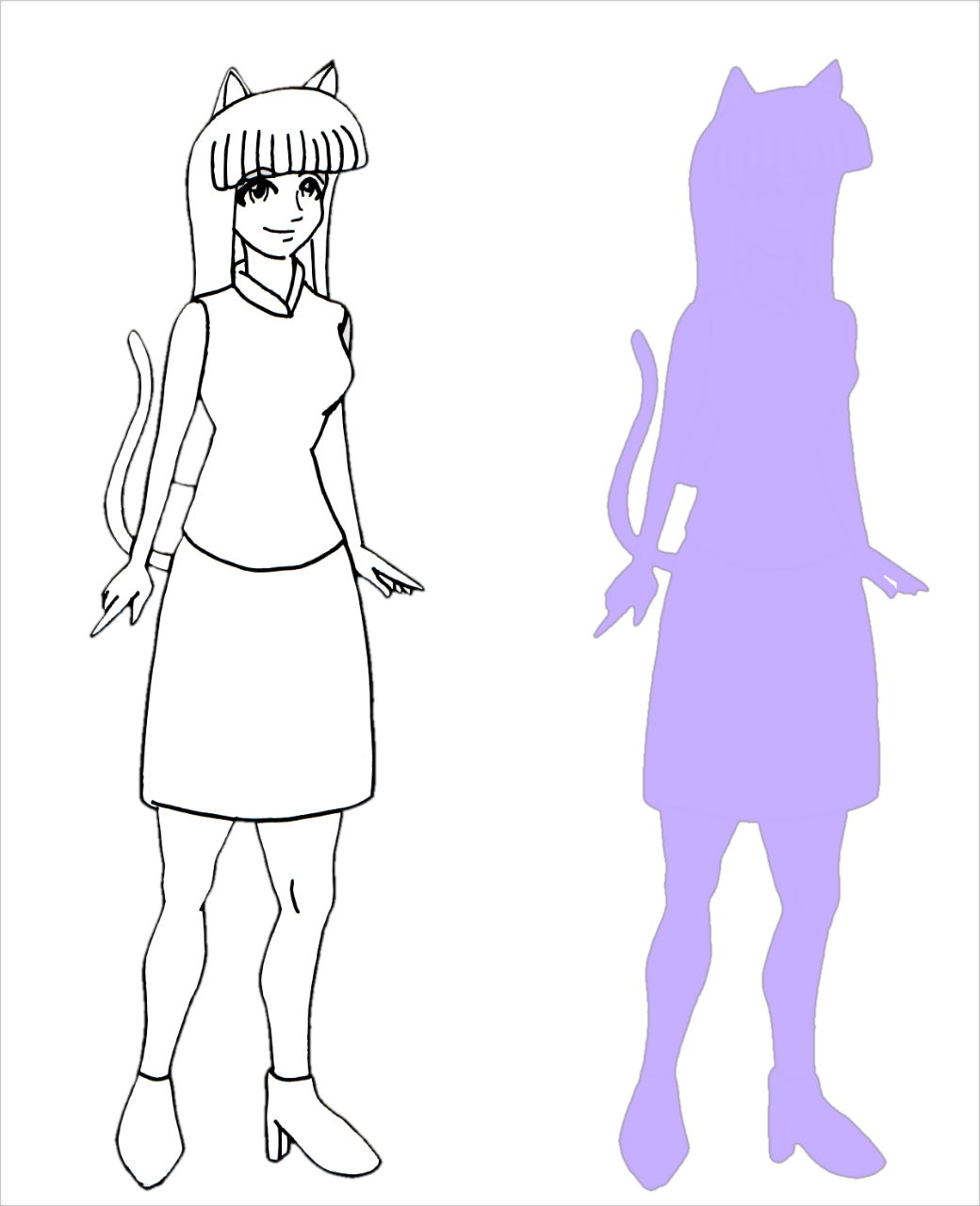 A moment of obliviousness, mixed with clear shock that she’d been transformed, passed before Mike caught on and did what started as a bow but ended as a careful curtsey as she grappled with her dress and a sudden blush on her cheeks.

To those watching, I added, “I hope you enjoyed this street magic performance. That’s all for tonight.” It was a terrible lie, but better than most of mine and the small crowd in the coffee shop managed to buy it with a smattering of applause. We quickly exited the ‘stage’.

From the serenity of the shelves, Mike managed a softly-breathed, “Holy crap…it’s real”. She leaned back with a chuckling head shake and a smile to mouth “Wow”. I whispered and stammered, “I didn’t mean to do that. It was an accident. I wanted to give you a choice. I just…” She stopped me before I could get further and said, “I made my choice to catch you. I knew what would happen. It’s fine. I would’ve made the same choice again.”

She moved her hands to set them on my shoulders as a comforting gesture, but I moved away before she could touch me. She gave a nod and recalled from our conversation, “Right. No second touches. Heh. Sorry.” Instead, she did as I and others had done and mimed the gesture with a smile.

Our next stop was the bathroom. I had to remind her to go left instead of right now and I had to remind myself that I couldn’t follow her. With a long breath, I leaned back against a row of maternity books, closed my eyes, and reminded myself that this was the ninth time I’d made a catgirl. The tea table would be getting a little more crowded. Well, assuming Mike wished to join. I was getting ahead of myself.

I thought about calling Allison, but I’d neglected to take my phone. I’d have to call her when I got home. It would be good to get Mike’s contact information. While no one’s relatives had turned them away, and the world had accepted them with an eerie degree of calm, I worried each time that the shift wouldn’t work out so well. I scratched my neck. I wondered if she wanted to join in at Steve’s movie nights. She had a fantastic depth of critical analysis which would probably make it more fun for Steve than my typical, “It was fun” reactions. Snickering to myself, I leaned forward to take a step away from the shelf. I still had my eyes closed.

Suddenly, my eyes bolted open. A guy. Less than a head taller than me, deep tan and lanky with dark, slicked-back hair. Close enough to me that I could suddenly smell the prickly assault of his after-shave. Oh crap oh shit!

I staggered backward against the shelf and pulled my arms away as quickly as I could. I clung to it for protection as I stared out at him. Had I touched? Had I freaking touched anywhere?! Thinking, delving, I couldn’t pull out any sensation, but he’d come by so quick and I wasn’t paying attention. Shit shit shit. He stopped for a moment in front of me. He called me ‘dude’. That could be gender-neutral to some people…maybe maybe.

I watched him. I watched too long as he paused there. Nothing changed. Not yet or not going to? I felt clammy all over. I was sure I was panting, but I couldn’t hear it for the pounding in my ears. Then, with a little droop of his mouth, he scowled and muttered, “Freak…” and walked through the doorway to the bathroom.

I waited. I listened to the silence as he pushed open the squeaky door to the men’s. None of the touches, even the little ones, were delayed so long. I was, hopefully…probably, in the clear. Finally, I could breathe, if only a little. I felt nausea well up in me like it used to when I stepped outside my door and into the wide, chaotic world. I couldn’t hold it back. The trash bin beside the water fountain would be enough. I clutched it to still the trembles as I lost the onion-and-cheese burger I enjoyed so much before the bookstore.

Even rinsing my mouth out with the fountain didn’t help much. I pressed back against the sweat and tears. Despite telling myself never again, despite trying so hard to watch out, Mike still approached me before I realized she was there and softly asked with her new voice, “What’s wrong? What happened?”

I staggered backward with a prickly shiver and a pant. Her bright eyes were wide with concern. I brushed my mouth with the back of my hand and shook my head.

She nodded with vigorous concern and said, “I hope it wasn’t because of me…”

I waved my hands close to my body, elbows in, and said, “No. I might’ve eaten something weird. It’s fine now. So, how was it in there?”

Fixing the hem of her dress, she looked down at her feet and offered, “Just imagining doesn’t prepare one for the weight of it all. And I have a big caboose…” She turned slightly with a blush.

I chuckled and lied, “I didn’t notice.” She did a little posing and shifting on her legs with a smirk. Then she stopped and clutched her hands. “Sorry. You’re not feeling well. I have a car if you need a ride home or anything.”

I waved my hand from my side while I glanced around for people in my peripheral vision. “It’s passed. I’m just a little skittish from what I mentioned about…touching.” She raised her slim, soft but still wiggly eyebrows and noted, “Of course. I can watch out for you. Unless I have powers now too.” I might’ve mentioned it in our chat, but I reassured her that wasn’t the case. Her shoulders relaxed a little. If only I could relax like that too.

With Mike, who mulled what to call herself now, as my bodyguard, I made it through the open, neglected cooking section and into a minefield of people clutching their smartphones as they mindlessly wandered along. Not even a girl with obvious cat ears and a tail could rouse them from their stupor.

When the people thinned, I began the talk which I usually left to Allison. In fact, I started by pointing out that Allison was better at this sort of thing, but Mike just laughed and said it was fine. We’d touched upon most of it in our initial conversation.

All I could really offer her was, “I just hope…so much…that this is a good thing for you. I’m sure the other girls will love and welcome you with open arms if you wish to join their tea club. I still have no clue how this all works, but I’m really doing my best and hoping I’m not screwing up.”

She listened intently and reassured me, “It’s alright. I’m alright. I’m happy. And it’s all enough to write a whole essay on right now. Actually, it’s funny, I feel instilled with the spirit of an enigmatic but radiant girl from a novel I enjoy. You even look a little bit like her. And I’d love to join this tea club.”

She passed along the title and I added it to the list in my pocket. I’d forgotten about the list. She asked for it and smiled over several entries, noting, “If these are the books your friends love, then I’m sure we’ll get along easily. In fact, if you don’t mind, I might even be able to find some of them.”

Holding the list, she led me around and cleared the area each time for safety. It was nice listening to her talk about books. The professorial spark was still there with a cute radiance like she described. We carried on like that till closing time, after the sourness in my stomach and throat had eased.

I only wound up getting one book on the list (one more for the pile). Mike drove me home in her older but comfy car. After a friendly goodbye and a long-delayed exchange of contact information, I found myself in my apartment staring at Allison’s number on speed dial. I held the phone to my cheek and plopped down across the couch. Sighing through my nose, I pressed the button.

Despite the late hour, she answered quickly and nearly made me bolt to my feet. She added in “nya” throughout her words almost as much as Bethany. Before my panic could spill over, she quickly apologized and said, “I just had a weird, fun little cat dream or something. And it’s still kinda with me.”

Once my pulse came down to normal, I brought up Mike. Giggling and nearly meowing, she said, “Nyaaaaay! I have nine sisters nyow!” I didn’t want to tell her to lay off it, but my stomach twitched each time she did that. As for her number, it took me a moment to realize she was counting me as well.

I answered all her questions about Mike and how it went. She commended me on my 'quick thinking' with the street magic idea. I completely left out my near-miss and she enjoyed that the book I picked up was one on her list as well. We talked for a good while, I steadied myself through the cute cat-like talk, and I finished with as much of a smile in my words as I could offer right then.

In the silence of my apartment, I walked over to my bathroom mirror and took a deep breath with my teeth clenched. I reached my hand out and covered my reflection, leaving behind a trail of smudges. Shaking my head, I caught a glimpse in the mirror of someone else there. A ‘glowy’ presence around me, embracing me. Dark hair and an enveloping warmth similar to but not quite like what I felt in my hands. When I looked at the mirror again, there was no one else there.

I had no idea if I was losing it, but that moment felt good. It felt comforting to be touched that way. The pain and unease were still there, but I found something light to make and eat before I finally went to bed with dreamless sleep.