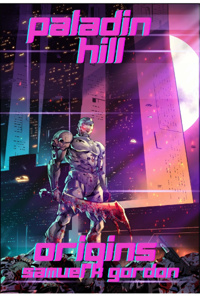 The dust has settled after the violence and bloodshed of World War Three. But something sinister is stirring in the swollen cities and decimated countryside amongst the children sired by the genetically enhanced super soldiers who helped win the war for America and its allies. As companies wage secretive battles for domination and Khalist cells sow terror and discord, teenagers are developing fantastic and deadly abilities.

Connor Hill’s normal life is shattered one morning after he becomes a bystander in an assassination plot. His ability to heal and control his body on a cellular level pits him against shadowy companies seeking to make a profit, their government cronies out to protect them, gangsters vying for power and living relics from the Greatest War. Connor must not only learn to control his strange and powerful abilities but find an identity in this grey, bloody world. Will he be the hero he wants to be, or the villain the world sees him as?

Paladin Hill is a regularly released serial featuring heroes, villains, super soldiers, brutal fights and giant swords with a taste of cyberpunk and gallons of blood.

Reviewed at: Gathering of the minds.

Its a decent story no grammar problems as far as I can see.

What I'm upset with is the lack of character development in any meaning full way. Like

A good bit into the story the mc's captured and is tortured an experimented on with multiple clones, his main body crippled and locked away left to feel every moment of suffering there going through until his mind is reset and the cycle begins anew.

One of his clones escape and what does he decides to do? He'd and report the big,bad, secretly mindcontroling you, corporation to the very same police force that capture you before in that hope that some one man can take o the organisation for you?

The my goes through alot of suffering at one point and his just so nonplused about it like WTF man.

The mc's character development has been (a coward to afraid to fight back and just hasn't progressed from there).

The my a fu#kboy that likes to get stepped on. it's hard to notice because he likes to keep it casual but if you look at fucking stupid deduction he's made since the start of the story it's clear as day. ( I mean if first you don't succeed an get captured by the government terrible experimentation try again hoping that some how this time it'll work out).

Ok I like don't know where this story is going and I'm not gonna post my spoiler thoughts out there even if it's easy to see but all and all its a great story and you might enjoy it so try it out who knows the author may even spice things up a little with the right insperation.

However in the end it's not for me.

I expected this to be about a group of teen having to deal with powers or a story about superheros in the same fassion of creep.