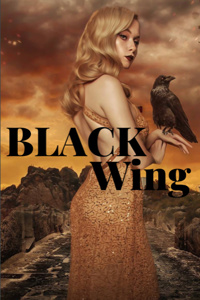 Raven. In a world of fantasy, where magic and sword reign supreme, a girl is reborn. Not as a hero, a villain, or even a common mob.

She was reborn as a dumb bird. Now don’t get me wrong, ravens are one of the smartest animals alive. But imagine going from a fully functional human body...to....this...

In this world, ravens are considered harbingers of death. Filthy pests. The incarnation of damned souls. Due to their penchant for mischief, they are shunned and despised by human and non-human races alike.

Join Raven in her journey from a naive baby bird that wants to become human again (or at least get some semblance of arms/legs), and grow to live a life worth living, eating delicious food and reading great books.

Also known as the Ascension of Amaris, Queen of the Night, Beloved of the Moon.

34 Chapters in and Loving it!

"It is not the destination, but the journey getting there that matters." (Warning: probably misquoted) This story embodies this line very well. The simplest way I can describe the story is this: A slice of life fantasy story following an isekaied woman's journey as a bird to survive, grow, and rediscover her old humanity. It is well written and a delight to read. Here's the breakdown:

Fairly traditional first person style of writing, with third person elements following other characters. The author does well on using both perspectives to do what the other can't. The chapters tend to be on the shorter side of things, and that can either be and positive or negative thing depending on one's preference. I personally see nothing wrong with shorter chapters, plus it helps keeps things clear when scenes shift. On the RPG side of things, there is no number crunching to be found here (not even levels). Progression is through fulfilment of prerequisite conditions, such as actions and deeds. Though more simplified than most litRPG stories, it fits in well with the other elements, but those looking for crunch should seek a story like Delve instead.

With 34 (short) chapters at the time of this review, there hasn't been enough time to get too deep into the plot and worldbuilding yet. We have learned a little about our hero's last life and her end goal in this new world, and some of the cultures that make up the fantasy world. I can't go much further without getting into spoilers, but much like an intricate flower blooming in dawning light, this story becomes more fascinating and enjoyable to watch the more you read. 5/5

There is thankfully no grammer mistakes that I noticed. The writing is clean, and spelling accurate. GREAT JOB! 5/5

The author clearly took care to fully flesh out their characters and personalities. They are distinct and stay true to who they are. The main character is a treat to watch succeed, fail and fail-upwards trying to make a place for herself in this strange new world. The side characters though few in number are not ignored, and I'm sure as the story progresses we will see then being more fleshed out. 5/5

I love what I've read so far and can freely recommend it to any who are into a different take on the isekai/litRPG genre. I look forward to seeing how this story unfolds and I'm definitely putting it on my Follow List. The only travesty is that so few have had the opportunity to enjoy it as much as I have. Hopefully this review will help change that. Keep up the good work!

Good story, main character gets on my nerves

Great story, great writing, great setting, pretty great overall. The main character is good too. Though she really gets on my nerves multiple times through out the story that definitely lowers the rating. But if you can get through a few frustrating parts it's an enjoyable story.

Style of writing is really good and smooth, on the action scenes especially. Even when we've been stuck in primarily Raven's head for many chapters, I didn't get bored.

This isekai protagonist made smart decisions..well, mostly...and the dumb ones made sense that they happened. No protag is going to make perfect choices, or we wouldn't have much of a story.

The story is done well. Sure, it's a bit of a  generic isekai plot, but it doesn't do the genre a disservice at all. The system is cool, there was some amount of though put into the larger world, there are big bads being set up and deeper motivations hinted at that let me buy into the story.

The spoiler is more for the author that an interested reader.

Two things that I found broke my suspension of disbelief a bit.

Evil empires don't cut it anymore. Sure we've had slavery and other horrific things IRL, but even bad people are multi faceted, and evil empires have more motivation that doing it for the evulz. Even if their perspective is warped and wrong, it makes enough sense for them to follow through with evil things.

So to sum that up, the evil empire and holy order needs more fleshing out for me to buy them. Removing old powers and gods is all well and good, but why did this movement start? Who thought the old gods were so bad as to try to start their own? Or are they a nation conquering other nations and trying to mesh the conquered peoples?

These.could be details I missed out on, but the point is, even if they were there, I didn't catch them strongly enough to make the empire seem anything more than... flimsy.

Sending 300 soldiers and other personnel after ONE raven, in the middle of a forest that nobody goes into (mostly) I so don't buy. Even with hints to a  Raven power who used to be formidable, I didn't buy it. They could just kill any ravens that come into residential areas.

It's a waste of resources.

Like, all Ravens apart from MC are literally normal (except from some monstrous aspects) ravens, and not goddesses. What is the basis for the Evil Emperor thinking another one will suddenly rise up? Where is the precedent that should be mentioned to make this believable?

Hope this makes some sense.

Also, the happy-ish ending with the Wolf King is too fluffy, but since I want to believe in happy endings I rolled with it. But...Raven still did kill those other wolves, and with the Wolf King being sentient I still find it hard to understand that they'd forgive that. Even as animals. Cause they're sentient.

Tofu_Moon is doing a great job setting up multiple plot threads. They're done in a way so as not to be info-dumpy, but set up enough plots to keep the reader's excitement high.

There is a clear overarching plot and I'm excited to see this story through.

Great work and please give this a try!

In simple words, its a sweet story which slowly unfolds into its full glory.

The hero and other charachters are well fleshed out, have their own unique character traits and the story progresses slowly with seemimgly dark undertones. The grammar is excellent. The MC has a goal to which she is slowly working toward, though she makes seemingly stupid decisions sometimes. The chapters, however seem short.

Childish Bully Is A Raven???

This is so odd. The protagonist is basically Dudley Dursley picking on Harry and taunting the snake. Except she's a raven picking on a goblin and taunting every other creature in the forest. Yes, she's an antihero but completely uninteresting. And the grammar is pretty bad at times. Characters are very limited. Not much in the way of story.

I find the stuff average at best. I don't want to put under 3 starts even if I rly didn't like it. My feeling are more beetween 0,5 - 2

+ grammar seems ok. But my english is bad so mb its awful i can t know

- mc don't seems to have an objective

- do random stupid action (taunt the wolf ? Its litteraly say at the end that she have no idea why. And I can t find one etheir except beeing an idiot). - change class, seeing one that could remove you re sanity and make you mindless. Saying "Omg that could make me a mindless zombie"... taking the class "Omg why do I did it noooo... [Insert divine mc luck and ??? Title effect] il fine oof. I ALMOST LOSE MY VERY SOUL ON THIS. But ok i know author bavk me up"

- she keep a goblin as a pet. The goblin is idiot an idiot. Half the chapters are the evoluation of the relation beetween a lost mc and an idiot and repulsive goblin. Kinda boring, author try to make us like the goblin but I rly can t.

- human and raven interaction seems to go 100% hostile. Won t be rly interesting for me. I didn't want to have a lot fo raven + idiot monster interaction but it seems that author will go for that.

- lot of filling chapters. At least 3 so far where MC just eat something in the whole chapter. (Great contend wow) and mb win a resistance out of it.