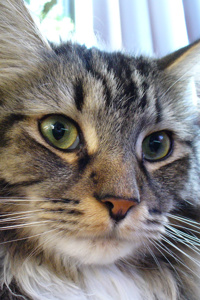 Bob was a good guy.  He had done everything you were supposed to do.  He exercised, he kept to a healthy diet, he'd studied hard, gotten excellent grades, and was working towards his masters.  Somehow, things just weren't working out for him like he'd been told they would.  He was stuck in a thankless position, constantly passed over, and it seemed that the only being on earth that cared about him was his cat.

Then things got worse.

Never back a man into a corner unless you want to find out just how hard he can fight.

Don't judge a book by its first chapter

Reviewed at: Chapter One Hundred and Twenty-four. Dark realizations.

I'll be blunt.  The first chapter contains right-leaning political views. However the rest of the 100+ chapters contain No politics whatsoever.

If you have a more liberal viewpoint and think you might be offended, then skim the first chapter and enjoy the rest of the story.  Which is excellent by the way.

Reviewed at: Chapter Ninety-Nine. Putting in some work.

As the title says, this is an overall very well written fiction.

The grammar is spot on, the characters have character, and the plotline is logical.

The main character reminds me of some of the old school computer techs I used to know. He is gruff, socially awkward(thank god he has his cat), and surprisingly insightful otherwise.

This story is a complete pleasure to read.

Reviewed at: Chapter One Hundred and Twenty-Seven. What rough beast.

I'm a little unsure how I feel about this one.

I'll start with the style, grammar etc All of these are quite good with few spelling errors and written to a high standard when compared to most web fiction. As far as that goes it is probably in the top 10% of what I've read in this regards.

The RPG is ...OK I guess. There's a solid mathemical basis for it and soem pages are just full of maths but not to the extent of some others I've read. TBH I tend to justy skip past most RPG explanatiosn now as they all seem to blend into each other after a while and just detract from the story.

The story itself is fairly standard isekai fare with yet another guest appearance from a hadron collider of some sort. The world building is quite limited though and it feels almost empty but that ios par for the course for most RR stories.

The main problem I have is with the MC and even ignoring the God awful first chapter he is a truly pitiful character but yet again almost normal for some RR writers. He has no real redeeming features at all. His only friend is a cat. Given his stated background he should have struggled to even make it through puberty yet he managed to thrive at school and ended up at Fermilab...somehow. He lives by a set of rules that a random man who just finished having sex with a hooker told him...One of these is to eat well yet he survives on noodles and canned spaghetti. He has no sex drive of any sort and honestly I couldn't describe his appearance.

If you have spare reading time and can put up with the truly terrible MC read it.

Not a fan of soap box characters so it was a up hill battle  from the get go to be fair. Beginning is political but if you agree can ignore or not care since it's fiction then it's fine. I personally don't like the character but made it to chapter 17 cause the story is well written and while I may not like the main character and other supporting characters they are well written. Dialogue is smooth the story is good it's just not for me and that's fine only leaving this review cause I feel like it's being judged unfairly.no one acts like that in real life it's a story and the extremes build a frame for the character

This fic has the potential to be legendary, especially if (WARNING MASSIVE SPOILERS UP TO CHAPTER 18 and hypothetical spoilers for later)

He takes the Shephard of the Titan path, and we get to see a Tier 9 Monroe. After all his stated goal was to find a way to never lose Monroe, (his cat) and I can't think of a better way than increasing his power so dramatically. I believe he will choose it since there likely isn't another way of increasing his tier. He could follow Monroe home with a gate, and this path would also allow for returning the human he has to summon to repair himself, freeing them up to take a combat or healing path.

I will be watching this story very closely, one of my favorite concepts is "Cat in a fantasy world"

Basic plot synopsis: A man is discriminated against and has no close ties to anyone, except his cat and best friend, Monroe. He is sent to another world by a lab experiment caused by another researcher stealing and modifying his work. Upon arrival, he is beset by problems, but his main focus: Summoning Monroe to him, since returning will not be an option.

Oh man the politics here. Do straight white males get discriminated against by people that are ultra liberal and triggered by them being white straight males? Yep. Do they talk like this to each other? Not even remotely. The politics is just an excuse to cause the triggering event which is fine but it should seriously be rewritten to make the politics discussion sound more realistic. As it is it just sounds like a super right wing person stuck in his little bubble not knowing what the left wing says and hearing what they think they say. You can create a realistic version. Here is a hint, rarely when someone is discriminating do they think of it as discrimination. Even their thoughts on it are usually coded in a way that it sounds like it's reasonable. They don't complain that they're a straight white male. they complain that they are 'not a friend to the gay community', that they're 'not fitting in' with diversity. See how that works. It almost sounds like it's his fault!

Once you get past the politics and get into the meat of the story, we end up with a rather interesting set of game mechanics and world building. The natives are oddly endearing and even friendly which is very different considering the initial tones of the story. Weirdly, I end up feeling very strongly hoping that that poor cat is taken care of. The main character honestly makes you feel for that cat.

Story starts of with a rather extreme start that another review puts very well recommending the rewriting of chapter 1 but past that it’s a story that sticks to the point with a amazing system and lifelike characters, the Mc is hard to relate to but think that’s fair based of the fact that the story is fiction and his upbringing is traumatic.

all in all great story, skim the first chapter or just skip it and enjoy the rest!

I like this story a lot, the iseki genre has always been a favourite a mine, and the way this poor damaged guy pines after his cat monroe is pretty heartwrenching. His single-mindedness in this regards reminds me of lots of other damamged people i know IRL and it is refreshing to see a damaged character portrayed realistically.

Furthermore I think the first chapter is pretty banging! I have personally had the misfortune of working with people like those portrayed in the first chapter... its like the author was working at my old office XD! People like that do exist and that is exactly how they think and behave from other peoples point of view.

The MC of course suffers from the usual MC syndrome of people being super helpful but thats not a crime. A fair few of the conversations in tbe new world are a bit info dumpy but again thats not a massive problem and doesn't destroy my suspension of disbelief so keep up the good work and i cant wait to read more!

CAT good, everything else eh

Reviewed at: Chapter Seventy-five. Math to the rescue.

This is either a decent fantasy slice of life w/CAT or a by-the-numbers litRPG.

So, the first chapter is garbage. It gets better, in that the character is shown to be faulty and... kind of moves on from his persecution complex, but the authors biases never really entirely go away. Also, the amount of numbers for the sake of numbers is amazingly high. The MC kills thousands? Hundreds of thousands of monsters in a few weeks’ time? And in a way that isn't narratively interesting, just “I kill lot thing, look amazing I am.”

The author also tries to excuse how the MC manages to figure out his amazing special fantastic cheat skills, but ends up feeling more like a ham handed “I do lot thing, look amazing I am. Authority figure bad evil, numbers go up!”

The story waffles between being a nearly adequate slice of life in a fantasy world story dragged down by the authors biases and a by the numbers litRPG where the fights and grinding get time-skipped for “I killed X number of monsters, I need to kill X+Y number of monsters to reach level 7, all the authority figures that I haven’t directly interacted with are evil.”

Reviewed at: Chapter One Hundred and Twelve. So that's how magic works.

I'm at chapter 112, so pretty deep into the story so far, there is definitely a learning curve and the newer stuff is better than the older.

So the grammar was good enough I rarely if ever noticed errors, so better than 99% of everyone else on Royal Road.

The story starts out with some heavy handed social commentary overtones, but if you make it past the first couple of chapters they pretty much drop away.  Still social commentary, but its subtle and doesn't distract from the story itself.  The first couple chapters and they're condemnation of PC culture actually serve a purpose as backstory for why the MC seems to have some character flaws, but it is done in such a heavy handed manner anyone left of center politically is probably going to stop reading and/or be offended.

Once the main story in RPG land gets started, you get a really well written portal fantasy, well fleshed out world, some interesting political and societal backstory stufff going on.  Probably on the crunchier side, not quite Delve, but more detailed than random +1's you get in most systems.

Main character is well fleshed out, and several side characters get a little depth, but its pretty much focused on the MC, and does the progression arc pretty well.  Gradually getting more detail on side characters, and character depth has been improving as the story progresses.

Repeated shoutouts to cats as awesome pets get a little corny, or maybe my dog is making me say that.