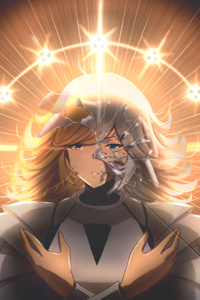 ASTRAL: Awakening of the Saffron Sky-Tamer

Remove Ads
Previous Chapter
Next Chapter
A note from Kyerality

A chase through the market leads to a chance meeting.

Having retrieved all the items on her list, Auriel walked slowly, her mind occupied with a reflection of the conversation with Roland. When her thoughts shifted to her past, her heartbeat accelerated.

Memories appeared unintelligible in a mental fog that clouded her sight. She focused intensely, and in her mind, flashes of kaleidoscopic light appeared, cleaving through the haze.

Parts of her memory were in shards like shattered glass: incalculable pieces in disarray. With significant effort, some of the fragments reunited into semi-coherent scenes: trembling hands stained in blood, an elegant, dimly lit courtroom filled with piercing eyes of judgment, and a hand grasping Auriel’s forehead.

The owner of the hand recited a mantra in a low voice, after which the dimness of the candles within the room was replaced by a blue light that grew in intensity until all-consuming darkness fell.

In her distracted state, Auriel missed the boys taking the ball from her hand and now running through the stalls, causing a ruckus. Little Orla had decided to get her attention before they caused any further trouble. Seeing them running, she facepalmed in annoyance.

Concerned for the vendors, she chased the boys through the market with Orla holding tightly on her head. Far ahead of them, a hooded and masked Number III manned a curio stall, filled with strange and interesting knickknacks. She sat comfortably, stretching her legs and putting them up on the free side of the stall, then proceeded to tap the table with her fingers, making rhythmic beats as she watched the passersby.

Behind her, the other vendors and a few customers grouped up and leaned over the next stall in an attempt to get a good look at her, entranced by her outline. Noticing her gawkers, she tossed her half-eaten fruit at the nearest lurker, knocking over the rest like bowling pins. She let out a long sigh, then sat back in the chair.

“Man, I’m getting bored. This was supposed to be an easy one.”

From under her cloak reappeared the orb. She smacked it a few times, with no results, save a few small sparks of energy that faded as quickly as they appeared.

“Stupid, broken orb,” she thought to herself. “Been out here all morning and not a peep. Gotta have Number VI fix it for sure when I-”

The orb began to glow once more, and a beam of light shot in the direction of the kids.

JJ and Adam passed the ball back and forth as they wove through the stalls, when III suddenly appeared in their path, colliding with Adam and apparently knocking him in the stall. A few items fell, including the orb. Seeing a peculiar opportunity, she dramatically dove to the ground.

Auriel quickly set down Orla to help Adam to his feet. “I’m very sorry ma’am! They are still young, and sometimes a handful.”

She noticed a strange aura emanating from number III and became immediately suspicious. Adam turned away and crossed his arms, but she squatted low to speak to him on his level.

“It’s okay young man, you’re only a boy,” uttered III, playing it up with a trembling voice as if she was an old woman. She made a show of struggling to her feet and falling flat. “Oh my poor legs, I can’t get up! And my stall! It’s in shambles! Now my business is ruined! Ruuiiineeed!!”

Seeing the pristine stall with barely a thing out of place made Auriel look at her with skeptical disbelief of the dramatic act. “That’s a bit much don’t you think?” she wondered. When she turned to Adam and JJ, she noticed they were both on the verge of tears with quivering lower lips. “Come on, you can’t be falling for this! She jumped in the way!” “Come on boys,” she said as she took their hands, “we’re leaving this strange person.”

They began to walk away when III reached out to her. “Wait! At least help me out here?”

“So you were faking those tears then. Are you some kind of crook trying to trick us?”

She got up and dusted herself off. “How rude, is that any way to treat people making an honest living?”

“Honest as the day I was born,” she expressed as she skipped close to Auriel. “Hmm… I was knocked over and my stall is now a mess.”

III attempted to ruffle Orla’s hair, but Auriel stepped in front of her. “You didn’t even help me up, but I suppose I can let it slide if you do one little thing for me.”

“How about no?” she retorted.

“How about we see what the nearest Egerian peacekeepers think? They should come through here often.”

As she turned to walk away once more, Adam and JJ held her arms. “Ellie, can’t we help her? It’s our fault her stuff fell.”

“Yeah, we don’t want to be mean,” added a sniffling JJ.

The pure expressions of the boys caused her to smile, then sigh and turn to III. “One little thing huh?”

“Yup! If you guys get my stuff back together, I can forgive and forget. Sound like a deal? By the way, the name’s III.”

Though III offered a handshake, Auriel ignored and began picking up items. “I don’t remember asking, and that’s a number.”

“Okay then, Ice Queen named Ellie,” she chimed back as she retracted her hand and interlocked her fingers on the back of her head. “The faster you’re done, the quicker I can get back to making a livable wage.”

With the help of the kids, Auriel managed to gather the oddities together quickly. As they collected the items, Adam came across III’s orb and inspected it curiously.

Startled by her statement, Adam accidentally tossed the orb. Auriel dove swiftly, catching it before it hit the ground. As she held it in her palms, she saw strange images like flashbacks, and a powerful wave of energy burst from her body in all directions.

III was taken by surprise as it pushed past her. “Whoa!”

The wave moved throughout the village, passing the borders and pushing through the surrounding forest. Some trees rustled, and a growl was audible in the area.

Auriel was transfixed, her eyes glowing golden, locked on the orb. Adam tugging her arm snapped her back to reality, and she realized she was sitting on the ground. The amber glow fainted and her eyes returned to normal.

“Wow!” exclaimed III as she clapped in amazement. “You’re pretty brave to swan dive and mess up your dirty clothes to protect my piece of cr- er, very important item! You’re not so bad after all.”

III held out her hand to help her to her feet, but she declined and stood on her own. She passed her the orb as she shook off the strange feeling.

III took the orb, and her aura intensified as she grabbed Auriel’s left forearm.

“What are you doing?” she asked as she yanked her arm away in confusion at the turn of events.

III turned away, crossing her arms and muttering to herself while tilting her head back and forth. “That’s odd. So very odd. What does it mean?”

“What are you talking about?”

She turned back and gave Auriel a thumbs up. “Thanks for fixing the mess you definitely caused, but that’s all for now.”

Auriel seemed even more lost and followed as she walked to the stall. “Wait, who are you exactly, and what is that glowing orb? Are you some sort of special wielder? Did you make me see those things?”

“I guess you could call me a *witch, didn’t you see my pointy hat? It’s where all the powers are.”

“At least tell me I’m not cursed or something!” She quickly grabbed III’s arm to stop her from leaving, causing her to turn around instead, and stare until Auriel let her go. After a moment of thinking, she decided to speak.

“Cursed? Oh, big time. Anyone who touches it without completing a certain ritual will be doomed. So basically, both of you.”

“Then undo the curse! We did as you asked!”

“Can’t. Only the cursed can undo it, with a ritual of course. Though I suppose with him being a kid and all, you can complete it for him too.”

“Okay okay, first you have to stand like this,” she suggested as she motioned for her to have prayer hands above her head.

“Alright. Now, this next part is really important. The incantation goes like this: I-am-gull-i-ble.”

III busted out laughing at her look of realization. “I can’t believe that actually worked!” she chortled as she rolled on the floor in tears. “Aw man, I can’t wait to tell the Commander about this one.”

An unamused Auriel fumed at the joke made at her expense. “First she’s rude, then she jokes about curses. Who is this weirdo?”

“Oh don’t give me that look, you know it was funny,” she said, waving her off. She looked over to Adam.  “He’ll be fine. He’s probably a bit hungry though, here.”

III handed her a bag of pears from a box behind the stall. Suspicious, she hesitated in taking them, reluctant to place any trust in such a strange and erratic stranger.

“No curse on these, I swear on the Evening star.”

Auriel took the bag and turned to share it with the kids. A gust of air passed by her, and when she looked back over, the stall had been covered up with a large ‘CLOSED’ sign on the front, with a second smaller one reading ‘Seriously, don’t knock or bother me, please and thanks’.

With one last look at the stall, she turned and picked up Orla, stating “That’s enough excitement for one day, right Orla?” Addressing the boys, she nodded, “Let’s head back okay? And no running off this time.”

Witch: A class of wielder requiring a conduit for their powers.

Bio: Avid fan of comics/manga and animated shows since I was a kid, I spent a lot of time writing/drawing my own stories.