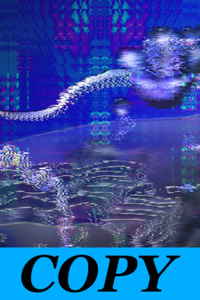 I proudly stomped into Momo, then proceeded to have my right arm completely ripped off. Not even the shoulder joint was left intact—In its place, was the most pain I had ever felt, or ever imagined that I could feel.

If this seems abrupt to you, just imagine how it felt to me.

I’m not a warrior, not a soldier, not even an athlete. All I could do was lie on the ground and scream in a puddle of my own tears until my throat bled out my mouth. I couldn’t feel the blood spurting out of my torso anymore, I could only tell it was still happening by the smell of iron and the warm feeling that trickled down my face.

Next, the hallucinations came. They started when I made the mistake of using my remaining arm to wipe the viscera off my eyes and look for my attacker. I didn’t see any sort of Bunny berserker, but I did see myself. I was about a hundred thousand miles away from myself, give or take a few lightminutes. Her arm was a normal length, but it could still reach through to me. Oh, yeah, she has both of her arms. I guess my blood-loss induced visions must have been pulling from a slightly outdated mental database.

She was reaching out her hand to me, like a distasteful joke. She wiggled the tips of her fingers a bit in an inviting manner, but I wasn’t having any of it. I was literally dying, I didn't have time to play with demonic hallucinations. For hours we stared at each other. She never once put her arm down. My sense of time has gone a bit wobbly since my body lost about half of its blood, but I think it’s been about a week now. She’s still staring at me. I used what little vitality I had remaining to curse her out.

Then she slapped me. Like, actually slapped me. I felt the impact of her hand on my bloody cheek, the minor whiplash to my neck, and the warm droplets flying through the air onto the pink carpet. Alright, fuckin’ fine. I tried my hardest to reach out with my intact left arm.

She gently nudged it away, and said:

The other one, huh? The one that was thrown across the room, that one? The one that apparently had 80% of my blood supply in it? The one I lost weeks of hypothetical time ago? Yeah, okay, sure. I reached out with my nonexistent right arm.

And I grabbed her hand.

My arm was totally healed. No cuts, no gashes, nothing missing. I stretched my shoulder, making sure the joint was properly in place. If it was, it probably wasn’t anymore, because the other Mina pulled on it so hard she dragged my limp body across the floor. Have you ever gotten carpet burn off of a hundred thousand miles of carpet? It was exactly as fun as it sounded.

I stood up, and she was gone. There was no sign of her, of my arm, my blood, or even any struggle. It was like things were perfectly reset to a few minutes ago. At least, I hope it was only a few minutes.

I slapped my face to wake myself up, and pressed on towards the middle of Momo. A sane person would have turned around and gone home at this point, but since I was just pulled through spacetime by an identical version of myself, it’s safe to say I’m not that kind of person anymore. I was being more careful this time, however. I really didn’t want to go through that a second time.

I hesitantly peeked around each corner of every anime-filled shelf I got close enough to. No signs of anything suspicious (for this store.) I was moving slowly, very slowly, but I was getting closer to the changing rooms. That’s where all this started, and it’s where all this ends. We were going about it all wrong earlier, and in retrospect, it was way too obvious to miss: Bunny never left the changing room. The Bunny that came out with Rose was just another one of the clones, to distract her. That’s where she still is now, with who-knows-what being done to her in order to create those copies.

I got about one shelf away from where the changing section was before I started hearing noises. Impossibly light footsteps, just like Bunny makes. They must be like guards, patrolling the area around the dressing room she went in. This theory of mine was likely proven correct when I felt an icy finger press against the nape of my neck.

Sound of Ceres - My Spiral Arm