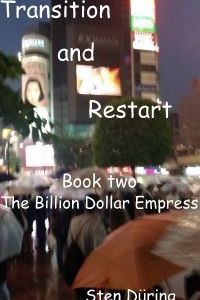 You old goat, she thought. You got the kids hurt again.

It didn't matter that two of the kids were senior to her by twenty years. In this world they were still kids, and her responsibility.

“There won't be any more assaults, at least for a while,” she said, “but there's a price to pay for that.” Once more Amaya felt disgusted with herself for what she was about to do.

“Our contacts in Red Rose will hamper their actions as much as possible, but they refuse to be flushed out in the open.”

Principal Nakagawa grimaced. “Bloody cowards! That's why I despise the other faction.” Then he locked eyes with her. “The price. Spit it out!”

Amaya looked down at her lap. She hated it. “I'll have to hurt them both. In return for the Wakayamas to stay safe they want us to make sure the arrivals don't cooperate.” There were tears in her eyes now. “Arrivals! It's my little Urufu they're talking about, and Kuritina is just as sweet a girl.”

Nakagawa rounded the desk, and Amaya felt his hand on her shoulder. “What did they ask you to do?”

“I have to...” The tears ran down her face freely now. “I was told to ask you to help me break them up.”

The hand on her shoulder tightened. “And if I refuse?”

Amaya looked up at the older man. His face was all blurry through her tears. “If we refuse they'll target Kyoko-chan and Noriko-chan again.” There was no stopping her sobs any longer. “They said they'll make sure the arrivals won't be assaulted, but any friends of them are valid targets.”

Nakagawa sat down on his feet beside her like a man several decades younger than his age. It had to hurt. “What should we do?”

She knew what they had to do. Urufu would never accept any other way. “We hurt the children we love. We destroy their love. What else can we do?”


And that concludes book two.

At the time of this posting I'm halfway through book three, but any editing will be delayed.

You should find book three posted at a publishing schedule of maybe  two 2K chunks a week. That schedule won't improve until I'm a fair bit into book four and able to edit book three with a decent mental distance to it.

I hope you've enjoyed the ride until now.

In case the link to book three was hard to see: http://royalroadl.com/fiction/4772