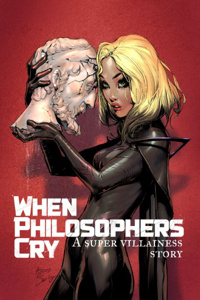 Chapter 21: The Path to Evil

The three missing chapters will be posted during Christmas holidays.

Sorry, I have to officially reduce the release rate to 1 chapter per week for various reasons (nobody probably cares to know).

[This scene plays 2 days before the current timeline]

In an abandoned wine cellar somewhere in Khalut, Ura was bending over the bound body of a certain information broker.

Nothing had gone as expected. Huic, this imbecile, threatened to undermine the supremacy of the empowered humans. Could they really control themselves without being shackled to The Judge? Ura honestly doubted it. She would do everything in her power to conserve the status quo, even if she had to play the disgusting role of an overly sensitive and naïve teenager to fool Lure.

The hideout, where she currently stayed, smelled of cigarettes, an odour she couldn’t quite stand. Her organization had to hide because of the incident one day ago. If her organization wasn’t one of the central pillars of the NIP and had several villains as allies, mayhem would have already broken out.

“So, are you the next commissary? A girl barely over eighteen?”

She didn’t correct him but hit him with her leg in the belly until he screamed.

“It’s a family business. The Banished Diplomats got my father; it is thus only natural that I continue his legacy.” She gagged him with a piece of cloth. She had lied, but he didn't need to know.

Ura continued torturing Gibson. He had reminded her of the death of her beloved father. She didn’t care for most people and certainly not for the effeminate man in front of her, but a few dear people still warmed her heart and let her peacefully sleep at night.

However, this womanizer had tried to hit on her; now she hit him as well, sweet, sweet justice. He was still too useless as a puppet, though, and her organization had several healers who could patch him up.

“Please. Please, I beg you, stop.” His pleas were a joyful melody in Ura’s mind, soothed her and let her relax.

Did he enjoy it? No, he didn’t seem like a masochist, but someone who was genuinely in pain. Good. She loved to break people and make them her plaything. Ten years ago, she had played with dolls; now she played with big, living dolls. She had learnt her craft from Thibaut who she considered as her big brother, although they weren’t blood-related. In the evenings, he had enchanted her by the magic of theatre and the art to hide her true emotions.

She loved him and couldn’t stand the fact that Lure had gained his attention. This girl, Ura’s biggest rival, possessed a quality few humans could leverage: her charm born from naivety. Since her manipulation was done via genuinely good intentions, she could bypass most defences.

Yes, Lure had managed to charm Lumière and change her character, slowly transforming the headmistress into a version of herself. What a terrifying ability.

The whimpering man lay obediently on the floor.

“I guess it’s time for me to do my job.” She smirked. It was wonderful not being affected by the backlash of karma.

“Tell me, will you continue doing your job?”

He nodded, still being gagged.

“Good boy,” she said while she bent over his body and played with the hair of her good doll. It was smeary and not washed; she needed to change this.

Lure looked Gibson deep into her eyes and whispered a barely hearable, ”Thank you.”

“Manipulate,” she announced to the world.

No longer could she use Suggestion, a neutral ability that didn’t belong to either the dark or the light. However, now her ability was tainted by the powerful darker arts and would in time evolve into the fearsome Control, one of the most powerful and infamous abilities.

Like my mother, who used to manipulate villains with it, huh. Where will this path lead me to?

Lure glanced at her. “Didn’t you speak about identity five minutes ago? Yes, what I’ll do now is truly considered as evil. She smirked. I’ll be a true villainess.”

Her friend looked at her with a pleading expression, “Don’t do it. The corruption…”

“To hell with it. My father and Bastion are more important.” She raged. Her head was full of vile thoughts and frustration pent up over the last days. The burden of caring for her family and the uncertainty these days had weathered against her like a storm raging for weeks against a straw roof.

The perplexed Gibson in his red suit looked like a slaughtered lamb in her eyes. His expression was one of confusion, though.

“Manipulate,” she commanded and she imposed her will on recreating Gibson’s karmic threads. Unlike with Dominate, she didn’t really directly impose anything on his mind. Instead, she controlled his very destiny. Normally, non-empowered people didn’t have a free will because The Heavens didn’t allow it. However, Lure played The Heavens now; she created a destiny for him and time will execute it.

At that point, she understood how powerful her mother’s fully developed ability must have been and it seemed even natural to her that she was too dangerous for the NIP, despite being a superheroine herself.

She swung with invisible hands Gibson karmic thread, and his destiny swung to her liking.

Lure jubilated and embraced Sinistra, pressing against her with all her might.

“And danger, betrayal, friend, Ura, future, puppet, plan, evil, corruption.” As he spoke the last word, foam oozed out of his mouth. The sack of potatoes that pretended to be a human fell to the ground, breathless.

Metaphorical thunder struck Lure in multiple ways: first, she realized that she was betrayed, secondly, the burden of murder now weighed on her shoulders.

Crying like a little girl, she let herself slump into Sinistra’s embrace. The bottled-up emotions needed an outlet to flow out. The girls stayed in the desolate room for more than one hour. Sinistra patted Lure’s head and endured patiently all the sobbing of her friend.

“What he said might all be worthless gibberish. Right?” Lure sounded weak, she knew it.

“Considering that he didn’t speak in coherent sentences…,” mused Sinistra.

Lure shook her head. “We need to do something about the body.” While biting on her nails, she added, “About Ura, we should talk with her – while being prepared.”

Maybe everything was just a big misunderstanding. Maybe.

Both of them watched out of the windows and observed how pigeons were pilfering the ground, how those busy birds were picking up every breadcrumb with their beak and flew away with a full belly.

The silence was painful since neither of them wanted to make the first step, a step towards potentially losing a friend. After all, the accusations were grave, and maybe they were overreacting. Wisdom dictated that they should first sleep over the incident and then debate their proceeding after they were certain they chose the right approach.

“Call her, please. Can you?” Lure’s legs started itching and her breath became slow and heavy.

“My reach is only about two hundred meters.”

“I forgot, your ability doesn’t go further. Well, then I ask for Ura over the hero line.”

Every hero got a device to communicate with the headquarters or with a hero in particular. Lure and Sinistra got each one after Huic’s death since they became part of the Anti-Suicide Squad.

“No, I do,” exclaimed Sinistra chattering with her teeth.

Miraculously, it started ringing in the adjacent chamber and both Lure’s and Sinistra’s faces became white as chalk, for none other than Ura herself marched into the office, exuding an air of confidence and victory.

The air around the office got colder in the blink of an eye.

Even before Lure could say anything, Sinistra used her ability Shadowdance faster and more graciously than ever before, and appeared right behind Ura’s back, pressing a dagger against her neck. The few shadows didn't seem to impede her at all.

“There is one single thing I cannot stand under any circumstances: betrayal.”

Sinistra’s bloodshot eyes were filled with boundless raging madness, threatening to crush herself and her enemies alike. “Snake. Do not move or I’ll kill you.”

Lure gulped. Her friend had one open wound that had never healed, one so full of painful memories that it threatened to tear her apart.

Calmly and collected, Ura reported, “Some of us are bound to be loyal lapdogs and some of us are carefree butterflies. The former lives for the sake of his master, but is protected as compensation. The latter is free, but ultimately dies after a short summer full of glory.”

“Traitor.” Sinistra cut mercilessly the throat of her enemy. Yet, no blood gushed out.

Ura shook her head, “I cannot be killed since I do not live in the metaphysical sense of the word, not anymore. However, I am not dead either.”

These utterances shocked Lure, since a contradiction was presented in front of her eyes. Either Ura had lied or one of the most important philosophical questions of her age had just been brought to Lure’s attention.

The clever villainess thus asked, “Are you dead on one level, but alive on another? Like you are dead in the physical realm but alive in the metaphysical realm?”

“Smart girl,” acknowledged Ura. “But no, it’s the other way around. I’m alive in the physical world but dead in a metaphysical sense. I died when I was fourteen but I have been brought back of life, though resurrection comes with a price since you cannot dupe The Heavens; mine was my free will.”

“So did you never consider me as a friend?”

Ura snorted, “Not everyone is as naive as you. I would even dare to say that you’re the blindest person I have ever met. But, to answer my question. Yes and no. I am a shell that is filled by The Judge, yet my joy being your friend was genuine. However the Ura, you know, died two years again.”

“So,” Sinistra concluded, still holding her knife between Ura’s throat, “this was your personality when you were fourteen. I had thought you were a little childish.”

“Yes,” Ura nodded, “the one you see in front of you is the one filled by The Judge. The one that does not want to divulge unnecessary information, but is compelled by her former self.”

Lure probed, “So, is the good Ura still in you?”

With a bang she disappeared, leaving a baffled Lure and Sinistra behind.

Most characters lie in this novel. Don't take everything at face value.