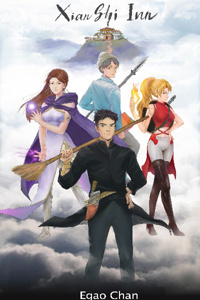 Inside one of the academy’s public labs, Jason was in his area testing his protection array. Thanks to all his practice, he is now able to construct some pretty sizable stable protection arrays that could withstand the impact of some of his own attacks, not full on concentrated and charged attacks, but still pretty powerful attacks from him.

After a short concentration, a dome that was big enough to cover himself and maybe two extra people formed right in front of him. If anyone paid close attention, they would see that the dome had small pieces of hexagon scales all over the surface and an internal structure like rebars inside of a building.

“Hmm.” Jason circled his work for a short while, then he formed a silver sledge hammer using his Xuanli, started swinging it at the dome.

“Bang! Bang! Bang!” with three full force swings, the dome was shaken and cracked up a bit, but the integrity of the whole dome was still mostly intact. Then Jason altered the shape of the sledge hammer, and made the end he smashed the dome with a bit more pointy.

Another three full force swings, the dome was shaken and there were three holes on the dome with cracks around it, quite similar to what would happen if he had struck something made of glass with a pointy sledgehammer.

Jason examined the three holes on the dome, as well as the remaining power in the array that created the dome. The stability of the array and the remaining power of the entire dome gave him confidence that he had made pretty good progress on the skill of constructing a stable array, and a powerful protection array no less.

Jason stood up and ran his palms through the silver sledgehammer and converted it into a sharp broadsword. With two steps back, Jason charged at his own dome and with the sword pointing forward.

High-pitched and slightly torturing metal scratching sound filled the room when the broadsword penetrated the entire dome and with the tip of its blade also damaging the opposite side of the dome.

“Nice protection array you got there.” a slightly chubby and nerdy student standing outside of Jason’s area told Jason: “Your structure is pretty good - with some resemblance of chain mails and scale mails. But the energy connection among the scales is a bit weak, making it more vulnerable to piercing attacks.”

“Thanks. I figured as much - it’s not easy to harden the entire shield though.” Jason sighed, and when he pulled the broadsword out, the entire dome flickered and collapsed: “Looks like I still need to practice some more.”

“Well, if you’re interested, we have a small arrays and circles club that meets twice a week to discuss arrays and circles. It’s mainly for freshmen and juniors, but I don’t see a reason talented audit students such as yourself wouldn’t qualify.” the chubby student smiled and extended his hand at Jason: “My name’s Carl, pleasure to meet you Jason.”

“Hi! Thank you!” Jason was surprised someone would knowingly approach him: “And I would love to join your club! I would probably just listen - I’m not sure if I have anything interesting to share.”

“Oh, nonsense, everyone has something to share.” Carl laughed widely and handed Jason a small card made of some kind of very elastic metal: “Our next meeting is tonight, please feel free to drop by! I’m sure a lot of the members would be thrilled to know that you’ll be joining us!”

Jason took a look at the card, which had meticulous symbols and a moving figure of an array, which was constantly changing in shape. The center of the card was a countdown timer and an address, presumably showing where the meeting would take place.

“... help...” a weak and throaty call came from the side, when Jason and Carl looked to the one making the call, they saw a student squirming and struggling on the ground choking on something, with small streams of dark blood coming out of his nostrils and eyes.

“Holy shit! Call the doctor!” some other student in the lab started yelling.

Carl immediately rushed to the choking student’s side and cast a simple yet fast healing spell on his fellow student in distress. The choking student seemed relieved for a short time, but then he continued choking and struggling.

“He’s under the effect of something toxic. His throat is closing up” Carl examined the student and said: “We need to bring him to the school hospital. But first we need to help him breathe. Jason, can you make some kind of elastic tube?”

“Will do.” Jason rubbed his hands and constructed a long silver tube.

Carl took the tube and placed his magic on it, but his magic was repelled.

“Sorry, I’ll make it enchantable.” Jason infused his Xuanli into the silver tube, and Carl immediately enchanted the tube and stuck it into the choking student’s throat. This made sure that the student was able to breathe even though he was in clear physical distress.

“What can we do?” another student on the sideline asked.

The scene made Jason feel that he needed to learn a few healing spells from Jianmen - if he knew something he would be able to help now. And he made a decision that he would like to call Jianmen the moment he got some free time.

“Jason, can you make me a long hollow needle. I think we need to release some air from his lungs.” hearing that the student was having trouble breathing as well, Carl asked Jason.

“Here it is.” Jason immediately handed one to Carl, then he tossed a ball of silver energy forward, which turned into an actual patient transport trolley: “Put him on the trolley, save your power!”

“Do it!” Carl said to the students who were helping him with the elevation spell: “Focus on your detoxifying spells!”