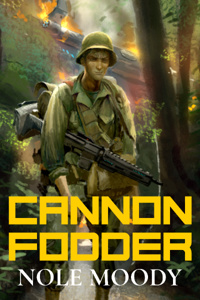 After the skirmish ended, there was little to do but sit and wait until the sun rose.

None of us could sleep after the battle. Adrenaline from the fight had lingered in my veins for a long time afterward.

The words exchanged in the dim light were friendlier and more affirming than usual, as we tried to convince ourselves that it had been our skill that kept us alive.

Accepting that luck played a part was more than most people could handle, we all dealt with the aftermath in our own way.

Robinson retreated to a dark corner and came back far more relaxed, whatever pharmaceuticals he had indulged in had obviously worked.

The ever driven Sarge stripped his gun down and checked his equipment with the fervor of a religious zealot. If anyone were going to die under his command, it wouldn't be for lack of attention to detail.

Kuwta and I had both taken a more studious approach, updating our diaries.

I watched the Orc woman. A fearless warrior who had just killed without remorse. She sat chewing the end of a pencil as she considered what to write. More concerned at selecting the right words for her entry than she had been about the moral right of killing an enemy who hadn't even seen us.

Each of us was so very different, in personality, creed, and in some cases, species.

These might not be people I would have chosen as friends in civilian life, but they were more than that now.

We might bicker and disagree on things, but I trusted them to have my six when it mattered.

They had literally carried my life in their hands.

I trusted them more than my own family.

Light filtered slowly onto the landscape breaking the oppressive darkness and revealing the remnants of the battle from the night before.

Revealed, Buzz scuttled back towards the farmhouse. At this distance, he looked just like a cockroach. His movement was jerky and erratic, not at all like an animal.

"Salutations, hive members," Buzz called out as he approached.

His mandibles and much of his front carapace were stained a dark, moody, red.

I tried not to think about this. Instead, I concentrated on forcing an upbeat tone to my voice as I replied.

"These may be of interest to you fleshlings?"

The insectoid reached under its carapace and retrieved a surprising number of items. Dropping each to the floor. Looting apparently wasn't something that troubled it. Along with eating its enemies, my subconscious reminded me. I was really pleased that the bug was on our side.

Needing something to distract me, I focussed on the items Buzz had scavenged from the enemy.

The weapons seemed no better than those we had already, so I placed the pistols and rifles to one side.

Two of the remaining items were of huge interest to me, respirators. Smaller than our gas masks, these might save our lives.

De'Ath Respirators.
These are worn over the mouth and nose or the entire face to prevent the inhalation of dust, smoke, or other noxious substances.

These items are usable by most humanoid species.

The addition of these meant that we had four breathing devices split between the six of us in the squad. I hoped this might help us keep what remained of our sanity a little longer.

"Peters, you and Kuwta take the respirators." Sarge indicated.

I passed one to Kuwta. The strap stretched taut as she pulled it over her head. It looked tiny and awkward on her heavy features, but it stayed in place, and she nodded in approval.

The other I held out to Sarge, "You've barely worn one Sarge, as our leader, you need to look after yourself."

I didn’t bother to use my ESP - this was a stand that needed to be taken, even if it caused waves.

Sarge's forehead furrowed in consternation, He wasn’t happy that I was challenging his authority, but before he could respond, Robinson butted in.

"Take mine, Sarge. If anyone is going to hallucinate, it should be me. I've more experience with drugs than the rest of you."

The lunk grinned, I was half convinced the idiot was looking forward to the effects.

The squad fell silent as Sarge glared at Robinson. You could have cut the tension with a knife as everyone waited to see Sarge's reaction. One person challenging an order was insubordination. In a squad of five, two challenging that order was stepping very close to mutiny.

Sarge glared at Robinson, as he considered his position. I half expected a flurry of violence from the man to establish his dominance, but after a couple of seconds he nodded jerkily and reached out to take the mask. "Alright, point taken. Men, we move out in five minutes."

Robinson was grinning as we prepared to move out, "Sarge was going to bite your fucking head off. You can thank me later."

The man was a bloody idiot, but he was right. I was glad Sarge was wearing protection now. The last thing we needed was an insane leader issuing orders.

We marched rapidly through the desolate terrain. It was an eerie world we now inhabited, occupied as it was only by ghosts and the enemies that had killed them.

Where possible, we kept out of plain sight, preferring to obscure our profile by moving close to ruined walls or to move through the charred remains of a copse of trees.

The skies remained colorful shades of red flecked with blue, but thankfully the dark clouds from yesterday were absent. I was sure they'd return soon though, the air felt heavy, and it felt like the planet wanted us gone. The planet was tired, possibly dying, and wanted to be left in peace.

As the hours of our march drifted by, I counted down our descent into madness.

We were still three days away from our objective, and it was unlikely we'd avoid the effects of the gas pollution before then.

If you were insane, did it still hurt when you died?

Who will succumb to madness first?
Previous Chapter
Fiction Index Next Chapter
About the author

Thanks for reading :D

Are we taking bets on who tweaks out first?

I'd be interested to see what people think :D

I'd say the smart money is on Westcott, but that wouldn't very amusing. The most amusing would Peters. We'd get to see it from his point of view, so we'd have no idea at what point he became an unreliable narrator.

I think it might be Sarge, but they will not notice it for a while because he has already been acting strange. He will just become more irritable on the outside, while going full crazy inside.

The ever driven Sarge stripped his gun down -› ever-driven

I'm kinda interested in the De'ath take of things, to be honest. In this setting, it seems that humanity has interracted with them more than once. And whatever interactions they had, it was enough to convince people that they were demons from Hell. Now that they're real flesh-and-blood organisms, what motivates them? Why was did first contact go so...ahh...poorly?

Like, I understand that they are cruel, but why? Perhaps at first contact, the De'ath simply examined Humanity the very crude way. Skinning something to find out about it's musculature would be very scientific, and if the thing were still alive...well, I could see how that might be taken poorly by whatever species was being experimented upon.

There will be some explanation of this later on in the story - I want it to come out 'naturally' though rather than just explain it as an information dump ..

No, you're absolutely right. Natural explanation is best, there is nothing that kills a story like too much exposition at once.

It will not hurt when the Trout takes you

Just Some Guy 2 months ago

Thanks for reading :D

1) The skies remained colorful shades of red flecked the blue overhead - WITH?? (p.s. I like the fact you've used the American spelling of colourful adds to the immersion).

Happy New Year all, been to long since I've popped in but bonus I have chapters to read

Thanks for the feedback much appreciated (and I try to use the American spellings where possible - I live in the US now myself, but my default spelling is still British if I'm not careful ;)