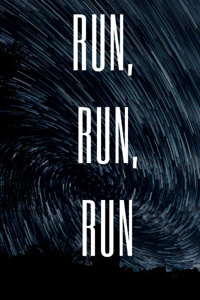 Stay sharp. Stay alive. Torv can't remember how long he's been running, but he can't stop. Or they will catch up to him.

One moment he was rowing in the stream with Daisy, tendrils of his aromatic pipe smoke trailing behind them in the spring afternoon. Until they arrived. And he began running.

So he follows the old trader's mantra: Stay Sharp. Stay Alive. And they haven't caught him yet.

He knows he can't run forever. He will have to face his pursuers, and as a result, his destiny.

Run, Run, Run is a fast-paced story that aligns well with the title.  The story itself is just starting to develop by chapter 20 as the chapters are short.  Don't let the short chapters stop you, they are small and fast-paced to corresponds well with the style.

Style: I'll get my big complaint out of the way, and it is with the dialog and the style that the author has used with it.  Instead of using quotation marks, the author uses dashes (-) to indicate a paragraph with dialog, and there isn't a break between the dialog and the descriptive text of that dialog.  This kind of breaks the flow of the prose.

Grammar:  I didn't see any big mistakes, and nothing stuck out.  The grammar is excellent and leads to the style.

Characters:  The characters are still developing, but you do get a good hint at what they are, who they are, and what drives them.  You definitely have to watch the characters to see what the plot is to the story.

Summary:  It's a fast read, and it definitely gives you a good idea of what is happening to the characters.  The story still needs to be fleshed out, but at around 20k words (when reviewed) the fiction is still young.

Over the River and Through the Woods

Run, Run, Run is a fantasy adventure -- emphasis on adventure. This is a story about striking off into the wilderness, dodging shadowy enemies, and bantering with eccentric old men with strange secrets.

The broad outlines of the plot so far -- an evil empire, a fleeing protagonist with a dark secret, a rebellion -- are nothing new, but it's to the story's credit that no attempt is made to pretend that they are new. Instead, the focus seems to be on executing each scene in a lively way.

Using short chapters that rapidly switch perspective, tacoriddles creates a sense of continual movement even when a given chapter only advances the plot a little. Sometimes, this breathless pace works perfectly, racking up tension and cutting out the filler. At other times, the narration gets too jumpy and unfocused for its own good. Flashbacks in italics proliferate like kudzu, and have the most damaging, distancing effect in the first few chapters.

(Flashbacks aside, the prose itself is usually smooth, detailed, and easy to read, though another round of editing for style and grammar wouldn't hurt.)

When Run, Run, Run succeeds -- it often does -- it seems to take its cues from the stronger parts of The Hobbit, or the sections of The Lord of the Rings where the Fellowship is pursued by evil forces through wood and briar. Like Tolkien, tacoriddles takes real pains with landscape and environment, and juxtaposing  idyllic, hobbit-y country life with encroaching danger.

Indeed, the landscape and country are at least as well-developed as the characters so far. Some are filling out; the motivations of the protagonist, Torv, are left mysterious for a while, but I'm not sure why, as nothing that's been revealed so far is that surprising. Daisy, the second protagonist, is gradually developing as well. A third viewpoint character struggles with the ethics of being passive in the presence of evil, and -- well, didn't I say this story switches viewpoints a lot? Anecdotes and, yes, more flashbacks round out their backstories and help add flesh to their bones.

Side characters hew closer to stereotype or, if you would rather be more generous, archetype. But this might be a good call. The perspective switches make it difficult enough to invest in any given character already, so fleshing out the side characters excessively would not have helped.

Even this early, the story shows promise, especially when it comes to scenes of harrowing adventure and charming forest detail.

You will probably like this story if you prefer:

You will probably dislike this story if you prefer:

'Run run run' is a fantasy story following a man on the run.

Overall the story is surprisingly fast paced for this kind of genra, I really enjoyed that fact.

There is a load a descriptive language in this story, it really paints a vivid image of the scene and characters in your head.

The perspective jumps around at first but you get used to it quit quickly!

Grammar 5/5 no mistakes found, in fact I'd go as far as to say that the dialect used in the story is very interesting to hear, as somone who lives in a british-english speaking country hearing somone getting called "thick" made my day.

Characters, while it may be too early to truly judge them, but personally I loved them all, it's fun to hear them talking to each other and fun to see them interact.

So far it seems like there isn't that much of the story out, either that or I didn't pick up on it, but that's not to say that there isn't a clear goal, so far the MC is only trying to get to safety, who knows if that's why they end up doing by the end :D

In conclusion I whole-heartidly reccomend 'Run run run' to any and all fans of fantasy stories :D

The style of the story is distinct and unusual to see on this site, but if that's the only thing throwing you off, give a few more chapters a try. The author is extremely consistent with the use of it and it feels natural to read sooner rather than later. My only gripe that I had to initially do a double take to see which character is speaking in the exchanges but overall it adds a nice touch to the two featured perspectives and how their experiences are recounted.

Coming to the characters themselves, they're quite easy for me to picture especially in terms of their personality. The author is also pretty good at describing the world around them, which is cleanly interwoven between interactions.

The setting is easy to visualise and there's been bits and pieces of the wider world's situation. Something's brewing but we don't know what yet. The author does a good job of keeping me curious without giving away too much. The two characters look like they're in an uncomfortable spot and the atmosphere is set perfectly for that.

On the grammar side, I haven't really noticed many issues. Maybe a missing comma or two. I would suggest breaking up the longer sentences and paragraphs into slightly smaller portions to make them easier to follow, but that's just my personal preference. Good work!