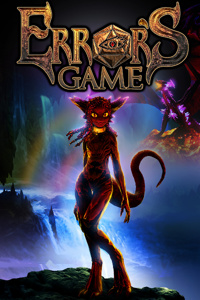 Ognevika, the almighty Red Dragon, solved all her problems with naps and fire. Now she is as an outcast kobold facing down a legion of murderous adventurers with only her wit and an unlikely friend. At least the world isn't ending in 25 years, right?

A whimsical, dark comedy. A fantasy sprinkled with post-apocalyptic elements. This is the light novel version, which explores the world of Athalon. Comic book coming out in the future!

Street cred and much love for participation in the 5 months-long Athalon rp campaign and making the world come to life goes to: Snow, Madalyn.O.G., ErinRedFen, Aura, JustMadDog, Pax Rozebar.

This is the second major work from the author and is a clear, evolutionary improvement on his previous opus Romantically Apocalyptic. It follows a similarly dark, grimy path towards its black humour, which is just as brilliant as before, but the storytelling is refreshingly tight and direct too. Overlook the grammatical inconsistency and occasional spelling mistakes: this is a gem that deserves your time.

Reviewed at: CHAPTER 7: THE RATIONALIZER [ IN WHICH THE EMISSARY OF ENLIGHTENMENT IS UPENDED]

At the time of this review there are 8 chapters and the preface currently released. I will if possible update this review as more chapters are released.

I am a long time fan of Vitaly Alexius' work having followed his webcomic (Now also available as a light novel) Romantically Apocalyptic for quite some time.

I've greatly enjoyed the chaotic humour, plot that can best be described as... eccentricly brilliant and delightfully charming characters of Romantically Apocalyptic and yet, I've always been more of a fan of fantasy than Sci-fi so when I found out there was a Fantasy story being created by Vitaly Alexius I read everything that was out.

Now I will go on record that Vitaly has asked me to give this review, but these are my honest opinions.

The preface is confusing, wild and honestly pretty horrifying in a sense. It's pretty par for the course for Vitaly who manages to often weave humour in with what would otherwise be considered cosmic horror to create something that is tragic and disturbing even as you are laughing at the absurdist bits.

What really shines in Vitaly's works however is the characters and the plot which often feels almost like it's being made up as it goes along only to suddenly pull off a twist set up long before making you realize that at least some parts are much more meticulously planned than you expected. Now, not much has happened yet in Error's Game to show that that is the same plot structure we are seeing here. The plot also seems much more straightforward than Romantically Apocalyptic's, but we will see if that lasts.

As for the characters... The two main characters we have met so far, Error and Agate, are some of the most adorable and likeable characters I have ever read even if they are adorable for very different reasons. Error seems like a strong willed and intelligent character and I want to see her succeed even if it is mildly amusing to watch her fail as well in some cases. Agate is just the niciest and most innocent thing ever and I want to hug her. I am irrationally happy that things seem to be going well for her right now in the story. The antagonist at the moment is also quite amusing.

All in all this review might be a bit rambling, but I am just... So enamoured with this story it's hard to stay professional. I recommend it heavily to anyone who likes fantasy and humour, especially absurdist humour like what one would see from the late Sir Terry Pratchett or The Late Douglas Adams.

Reviewed at: Chapter 10: Motivation [In which Agate wins a tragic backstory]

I am a big fan of RA and as RA Error's Game could become something amazing once it's turned into a comic book. Error's Game has: very interesting characters, unusual fantasy world setting and definitely incredible graphics! So, I think it has really big potential and I would love to see more.

Nice to see a new work of Alexiuss

As well as RA was amazing, it's nice to move forward to a new themes and ideas. I'm a huge furry and kobold lover and it's very cool that he decided to write about them ~_~ Error is my fav character so far, I think I understand her a bit.

I agree with guys above, this gives some humorous fantasy vibes like Terry did and still it has it's own charm. Not a copy of his style, just a similar feeling after reading this. I think, it will go far and find it's own huge fan base.

D&D (Dragons, kobolds, dungeoneering, adventurers with stats and levels) meets Lovecraft (the Necronomicon and other eldritch horrors) meets post-apocalyptic (but also with a foreshadowed second apocalypse) meets sitcom. Put them all in a blender, and somehow it works! It's got that dark, absurd humor I've come to know and love from Vitaly's other major work, Romantically Apocalyptic.

It's fun to see things from a dragon's POV. Especially when she's learning to see it all from an entirely new POV. It's an innovative take. All of the characters have been interesting, with good development as they gain or lose power and are confronted with new knowledge. Even the book has proven to be an intriguing character as it tries to deal with a major change.

The story itself is building nicely, but it could go anywhere. Even if there is massive doom lurking on the horizon, there's good reason that even the story's own Probability Knights are finding themselves at a disconcerting loss for what's going to happen and how it will turn out.

Grammar could occasionaly use a bit of polish, but no one ever gets all the typos, never mind in a story that's been Error-prone from the beginning.

Can you love a story with a wickedly unloveable protagonist? Error's Game indicates that yes, you can. Error is remorseless, a classic red dragon... but stuffed into a tiny, underpowered kobold body, she becomes compelling. She might be too stubborn to learn a lesson from her woes, but I found myself rooting for the little bastard anyways. Her growing coterie of friends and enemies, who are spread all across the moral alignment spectrum, is equally vivid. I love Lyca, who has become the unwilling straight man, dutifully following the orders of her own dragon boss. She's fast becoming a stark foil to Error, and I wonder if she's going to become an out and out opponent, or if their uneasy alliance will hold. The sly, sometimes cruel humor of this DnD story does a balancing act between a fourth-wall-poking parody and a genuine, quick-paced action story, full of violence, scheming, and KOBOLDS, an underused and underrrated DnD race. The prose quality is solid, with good grammar and flowing, punchy dialogue. These early chapters hint at something much bigger under the surface, animated all of the action so far. I feel like the story is just winding up towards its most outrageous and clever twists, and I can't wait for more.

Set in the same realm as Romantically Apocalyptic and thus admitting anything to happen, it's really a mind-blowing combination of post-apocalyptic fiction, fantasy and art. From the first pages you'll be entrapped by this facsinating story full of baffling plot twists where it's hard to tell the difference between dreams and reality. And though the story begins with its ending, the unfolding chain of events that leads to the unavoidable fate and destruction will keep you stuck to the screen longing for more chapters to come out.

Can't wait for more. If you like this you should have a look at Romantic apocalypse.

A fantastic romp in a wild world

A fun tale of kobolds and fate, I love seeing the world and characters Vitaly has crafted around the narrative and look forward to each chapter. The art is quite an added bonus and really helps me get a feel for things when i find it hard to picture it in my mind due to anhedonia.

Something to look forward to during Quarantine

Reviewed at: CHAPTER 10: MOTIVATION [IN WHICH AGATE WINS A TRAGIC BACKSTORY]

I'll admit, I'm a bit apprehensive getting into new worlds and stories, but reading this captured a feeling I haven't felt in years, the feeling of being completely engulfed in a world unlike our own. I adore Romantically Apocalyptic, but there's always a hint of realism in the fun absurdity. Capitalism, unjust systems and the like. But with Error's game, I can enjoy a completely enthralling new world, described and painted so vividly, I can picture it all. Error and Agate are lovely characters that play off each other well, and I quickly bonded to the two and their relationship, with Agate's relatable outcast status, and Error having to face a new reality. I already look forward to the next update, because while certain kobold practices described in this are rather uncomfortable, it's dealt with in a cathartic manner that doesn't leave me yearning to get the bitter taste out of my mouth. With Vitaly's body of work, certain themes come to light. Apocalypse, unfair structures, love, and enlightenment, and hope in the face of adversity. Hope and love just so happen to be a very comforting and delightful combination of themes that in this leave me compelled and wanting more.