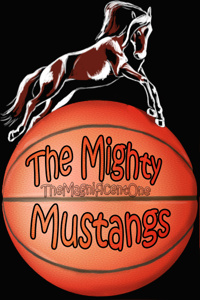 The Mighty Mustangs: A Basketball Story

Side Story: The Villain's TakeOver

Just a little something until the next arc starts!

1 Month Before The Start Of The School Year

“The new Experts come in today, right?” Hinta Higher asked while stretching. He was very intrigued to see if the Experts were everything they were hyped to be.

“Coach holds them in high regard. I’m sure they’re great, but I’m scared they might be cocky,” Ben Willard added.

This was the first Summer practice for the Hampton Knights, a team that did significantly well the year before. Ben Willard, the current captain of the team, had been trusted to open the gym ahead of practice for some players to shoot around.

Hinta Higher, an eleventh-grader, was the top scorer of the team at the shooting guard position that excelling in three-point shots. Hinta scored around thirty points a game the year prior and was considered a top high school prospect.

Nash Nickels, a twelfth-grader was the center of the team and was a decent height for a center. Nash was a high jumper that developed a reputation for dunking over many players the year before. Nash was the co-captain of the team for his strictness. However, nobody would be able to tell how strict Nash was simply by talking to him.

Ben Willard, a twelfth-grader, is considered the centerpiece of the team and is very strong-willed. Ben recruited Hinta and Nash in their respective freshman years. Ben is the small forward of the team that is known for his flashy dunks. Due to this, Ben gets the most recognition from the team.

As the boys were taking shots around to warm up their bodies before playing, and that’s when a figure walked in.

“Oh? I see we have some hard workers here,” The figure said with an extremely cocky tone.

All three players turned and recognized immediately that the figure was Manny Johnson, The Villain. Manny had a sly smile on his face and looked ready to play. Ben immediately walked over and extended his hand to Manny. Manny looked down at the hand and shook it with a sinister smile before looking into Ben’s eyes.

“This is my team now. I’m the captain. This is no longer Ben Willard’s team, this is Manny Johnson’s team,” Manny claimed. Ben was shocked.

“You’re a freshman. You aren’t able to be captain,” Ben responded, keeping calm.

“Oh? So just because you’re older you get to be the leader? That’s funny because the scouts aren’t going to notice you anymore. They’ll be watching me unless I decide you should get some shine. I’ll be controlling the ball, I’ll be commanding the offence, and I’ll single-handedly shut down every offence that tries to score. As soon as I joined this team, you became nothing more than another body on my court. The fans will come to see me, the other team will be focusing on me, and all eyes will ignore you for me,” Manny said with a very serious expression. Manny lost all of his sarcasm for a moment to explain how he saw things working out.

“That’s not quite correct,” A voice boomed from the hall.

“Did anybody else just get a chill?” Hinta asked, looking around. Nash and Ben felt nothing.

From the door, Deon Sloan walked into the gym.

“We both know that all eyes will be on me. They always are,” Deon laughed as he spoke. “But I’m fine with your leadership. I prefer trusting my captain over joining a team that I see as unproven.”

“I gave Deon some information on all of you. We know your accomplishments. We also know that you guys haven’t won any championships. It’s almost sad. You are disappointing. Under my leadership, however, you’ll be an instant champion,” Manny explained.

“That’s really disrespectful. Don’t think that you can take over this team just because you’re supposed to be amazing at basketball,” Hinta said angrily.

“What if I tell you that I’m not going to score a single point myself. Deon will score every point for us,” Manny added.

“How about this; if you win, I’ll give you the respect you want. If you can pull this miracle off, you can run the offence and defence how you like. But I’m still captain. On the court, you can lead. Off the court, let me take control. I like your suggestion for if you lose, however,” Ben suggested. Before Manny could refuse, Deon spoke up.

“I like that,” Deon turned to Manny. “He has experience around this area and handling the media around the playoffs. You’re also very infuriating and you’d probably give us negative attention based on your personality. I require positive attention from the media. I want his deal,” Deon announced. Manny was slightly annoyed but let out a sigh.

“Fine, let’s do this,” Manny finally agreed. Both teams set up, with Manny allowing the seniors to start with the ball.

The game was short, with the seniors on the ground when the game was over. Deon was stretching.

“Done already? I could go for another twenty points, considering you guys couldn’t stop me for a single possession,” Deon laughed. Manny walked over to Ben and looked down at him.

“You could have put up even a little fight, make it seem like you really wanted it. But congrats, you’ve hit the jackpot,” Manny turned to walk to the change room, but he stopped and looked back at Ben on the ground. “Get ready to become a champion… Captain.”

Manny laughed all the way to the change room. Deon smirked at the fallen seniors.

“Just make sure we have a positive image as a team, and I’ll keep him in line,” Deon explained.

“Wait,” Hinta said as he stood up. “If you’re both so strong, how come I only felt a chill when you entered? I’ve felt that feeling a few times before, so I know what it means. But, I felt nothing when Manny came in.”

“Really? You’re good enough to feel that?” Deon laughed. “Manny isn’t a monster physically. He’s not a physical specimen or monster like some of us. He’s above average, yes. A great athlete, yes. But not to the level to send chills. However, mentally, you should have gotten an uneasy feeling. I’ve been told by some that he makes even the smartest players feel like idiots. His mind mixed with his body puts him on a level that I, regrettably, can’t reach.”

Deon turned and went to the change room. All the seniors were silent.

The seniors were absolutely demolished by Deon and Manny without Manny scoring a single point. Though Manny didn’t take full control of the team, he did get the keys to how the team played. The Hampton Knights got two completely different types of monsters on their team. Arc 2 will feature these players. How will any team be able to handle the Knights? A team that was already considered a top team, then getting two Experts in addition. Arc 2 is shaping up to be explosive.

Bio: Hi everybody! My name is TheMagnificentOne, but you can call me Mag. I am a film program graduate and want to try book writing instead of continuing scriptwriting. I usually write stories about sports, superheroes, or war. It's my dream to create comic books in the future, despite my inability to draw. I hope you all enjoy the stories I write and stay Magnificent everyone!