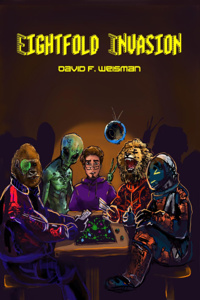 Simon isn't sure if he's going crazy or aliens from his violent RPG are bleeding over into reality - or which one would be worse.

The Best Form of Portal Fantasy

I don't know what I was expecting when I started Eightfold Invasion, but I didn't know it was going to strike so close to what I like. Kieron Gillen once called his Die series "goth Jumanji". I think that fits this story like a nicely worn shoe.

Gamelit and litRPG narratives tend to follow one of two moulds: protagonist travels to new world, either through the powers of magic or science, to become a god among men, or a mysterious System travels to the protagonist's world, and by using it he (it's usually a he) becomes a god anyway.

Exactly how and why these events take place are one step away from being dismissed as concerns: a bet between gods, a rite of passage to a community of hyperdeveloped space-faring species, or death turning out to be not quite what was advertised; it doesn't really matter how as long as John Protagonist gets superpowers and a girlfriend.

EI turns this handwave on its head. A fait acompli  becomes instead the journey, the very crux of the matter. Are aliens beaming nightmares into Simon's sleeping brain, or is he going insane? What does Lord Regal -- his old character from the Eightfold Invasion tabletop game -- have to do with it? The author walks a narrow line between portal fantasy and a Phillip K. Dick novel, and I never knew I needed this combo in my life.

Grammar:
Good, not much to point out here. From the comments it seems the first few chapters were subjected to more recent revision, and it shows. If the author were to do the same with the remaining chapters I wouldn't hesitate to give the full five stars.

Style:
As above, so right here. The prose is direct and to the point, but a final revising sweep could eliminate a few confusing sentences and give the story a final coat of polish.

Character:
Four stars contemplate what we've seen of Simon so far, which isn't saying much. He's way, way out of his depth, but has managed to show his expertise and capabilities. I have no doubt that once he starts growing into his new role he'll prove to be more decided.

Story:
This is EI's main strength. The story drew me in immediately, and the process -- the way the New World Order is slowly creeping in, alerting no one but a bunch of ragtag weirdoes -- is like nothing else I've seen on RR. I'll be eagerly awaiting new developments.

I love the concept, that things in a DnD world affect the real world, or that maybe, just maybe, the main character is crazy and it's all in his head. I also like the idea that the DnD characters they make become sort of real...it's a great concept and there's so much to do with it! I've only read the begining, but I stopped around the part when the MC tries to find answers to what's going on. The forsehadowing is helpful, but its not so obvious that its hand holding, or so murky that you can never catch on.

The writer doesn't have a discernable style, but the main character is easy to empathize with: millenial with an average dead end job that plays DnD on the weekends to make friends. Who doesn't want friends? It also seems that everyone might not be who they appear to be. It makes me wonder who is really the good guy, who is really bad.

The grammar is well done, and I found little to no spelling errors.

If you like Isekai's i highly suggest it. If you like sci-fi, its wonderful as well. Give it a chance, its better than most Isekai's I've read on here... and I don't even like that genre...

How does the Average Joe deal with the unknown?

Reviewed at: Chapter 7 Can you fool mind control?

The premise is like that of a Philip K. Dick or a Stephen King book. You are the Average Joe (or Average Simon, in this case), and the Unknown, the Abnormal is out to get you.

On hand this is a very horrifying premise for most of us - you usual baseline human is ill-equipped do deal with the supernatural.

On the other hand, we secretly, or not so secretly all crave adventure or excitement, so even though it's spooky, we like to read about it.

So the base formula is tried and trusted, but there are some minor pet peeves I have with this book.

The sentences are just weird sometimes. I can guess their meaning from the contex, but the way they are written is just confusing. It is a minor problem in the big scheme of the things, but I can see several readers dropping the story because of that.

There is no dallying, we get right to it. I think the way Average Simon's fight against the insanity and The Unknown is portrayed is really compelling.

The odd expressions and sentences belong to the Style, but the actual Grammar was good. At least I haven't seen any typos.

The main character is well done, I think the side characters in an uncanny valley for me though. They talk and act like human beings mostly, but something is slightly off about them. Some of them are part of the Abnormal, so in their case, it's alright, but some are humans just like Average Simon. So in their case the dialogues at least need some polishing.

All in all, this is an intriguing premise, with some flaws in the execution.

A Muddled Stab At An Interesting Idea

So, at its core, this fic has a really interesting idea.

The idea is that there is this consortium of (interdimensional?) aliens, called the Eightfold. The Eightfold take over/use planets for their own devices (it is implied some of the Eightfold, called elders, 'feed' on new species somehow), but before they arrive, they culturally acclimate the planet to their arrival by manipulating and mind-controlling/inspiring artists to create the presence of The Eightfold in popular culture.

This is actually a pretty unique idea for an alien invasion. The Eightfold essentially would be gaslighting entire species, who would presumably not be aware of their slowly encroaching presence until it was far too late, because everyone who might be alert to their presence would just come across as a loony who was taking entertainment far too seriously. And it sets things up for a lot of fun psychological ambiguity, since you don't really know if the character we're seeing things through is insane or if the Eightfold actually exist.

However - the author has intentionally tackled a very difficult challenge to write about. There's a lot of complexity, here:

1. Are the Eightfold real or not?

4. Many characters are also introduced at once (the other members of Simon's (TWO) roleplaying groups.)

Switching the narrative back and forth from dreams, to RPG game (that we don't know how real it actually is), to real world, with many characters (each member of Simon's RPG group is essentially TWO characters, the character they are in the real world and the character they are in the RPG), all while communicating the psychological ambiguity of whether Simon is just insane or whether the Eightfold is real, is something that would be a real challenge for any writer.

And the author here struggles with it. Transitions between these different realities are often sudden and jarring, leaving the reader very confused. Even when we're not transitioning from one reality to another, scene transitions within one reality are sudden as well - within the breath of two sentences, we might suddenly go from Simon talking to someone from one RPG group, to knocking at the door of an entirely different one we had just heard about. His RPG teammates are not given much attention, making it doubly confusing to track what's going on because, as said before, each one of them is essentially TWO characters.

And there's other complexities. The Eightfold themselves are not monolithic, they are composed of many competing factions. There's subtle concepts, like something called vulgar sorcery - which is essentially a form of compulsion, except the victim can resist with psychological trickery, making it a subtle and drawn-out form of magic - which go critically underdescribed. All of this complexity, combined with the necessary psychological ambiguity, and the jarring transitions, can make things VERY confusing.

My advice? Go much slower when introducing these concepts. Confusion is inherent to your story because of the psychological ambiguity of the Eightfold's existence. You want readers to be feeling THAT confusion - not confusion over scene transitions, confusion over transitions from one reality to another, confusion over characters that are given very little description, etc. You want readers to be able to enjoy the inherent ambiguity of the story, which means you should try very hard to reduce all other sources of confusion - make everything else crystal clear. Otherwise, the confusion readers should  be feeling over whether the Eightfold exists combines with and gets drowned out by other sources of confusion, making everything a muddled mess that can be difficult to read.

It's a very interesting idea at its core, but such a challenging one to tackle, that I almost think the author should cut their teeth on more straightforward stories first - gain more experience as a writer with simpler stories, learn to find your voice when describing scenes, characters, action, etc - and then come back to a more challenging project like this. I give lots of points for the basic idea and the attempt made, but this is something that even well-established, professional writers would struggle to do justice to, I think. Right now, the story often feels disjointed, jarring or muddled, especially at the beginning. More experience as a writer - or lots and lots of heavy editing with very good editors - would really be needed to do this story justice.