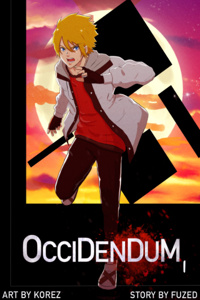 Fascinated by his father's profession, Nathan wants to follow in his footsteps and become an assassin.

When he receives an unexpected call giving an opportunity too good to refuse, unheeding his father’s warnings, Nathan joins Occidendum, a company of assassins.

Confronted by the harsh realities of his chosen profession, Nathan realises just how woefully under-powered he is. With his and the lives of the people around him on the line, he has to use his extraordinary brain to even out the field and survive in a world of legalised assassinations.

Men of shadows, hearts of gold!

Reviewed at: Chapter 7 - He Has to Die

Occidendum – a big word that means 'murder', but also a killer story. Nathan is a young man looking to follow in the footsteps of his father, Blithe, who is a highly skilled assassin. Even from just hearing that, one can immediately expect a story full of high-octane encounters, fights, and complex decision-making; and it delivers just that, along with a wonderfully written cast of characters.

Right off the bat, the style is reminiscent of descriptive, to-the-point literature, taking the reader from paragraph to paragraph easily and appropriately. It helps particularly in pacing the story, which is so in the middle, neither too fast or too slow, the way prose should be, for the most part. However, the author knows when to switch it up, especially in the action scenes, of which there are many; it turns into a quick-paced adventure, leaving you on the edge of your seat. Not unlike the type of material you would find in published vampire federation novels such as Scott G. Mariani or Darren Shan, Occidendum stays true to its intended style.

The story follows the adventure of a father and son dealing with the aftermath of a deceptive and treacherous company (Blithe, the father, is a member of said company) that works to assassinate people. Nathan, the protagonist, has to learn what it takes to be a master assassin, or hitman, if you will. This leads to a myriad of fight scenes, plot twists, and captivating interactions. For fans of vampire assassin novels, I would highly recommend this piece of fiction. Its so new, yet so delicate.

The grammar is picture perfect to published works, though, my only suggestion would be to take care when inputting punctuation in dialogue. Sometimes the comma or capitlisation of words in dialogue is incorrect. Though, this is a small thing and didn't really hinder the experience for me. The prose itself was perfect. Another issue I would bring up is that the author tends to switch between spelling out numbers and using the digits (20 and twenty). It's okay to use digits for large numbers (2356 years ago), but things like small distances, age, and whatever else should be kept consistent. Typically, anything more than two numbers (seventy-one thousand eight hundred years ago) can be put in digits. That's just a preference of mine though.

The characters, as I've already mentioned, are lovable, down-to-earth people that will leave you thinking they are actors from a famous cinematic film. Their actions are relatable whilst still maintaining individuality. Blithe is by far my favourite; he is so countrified and dowdy, but is still intelligent. Nathan is the follower, the one who hopes to learn from Blithe, and it's already evident pages into the book that that is his intention. Wherever they may go, I hope it is someplace good for the both of them, and I hope their actions play a huge role in the narrative.

Overall, I highly recommend this story to fans of action and adventure; it will pull you in and have you turning the pages until the very end. Kudos to the author for such magnificent display of éclat!