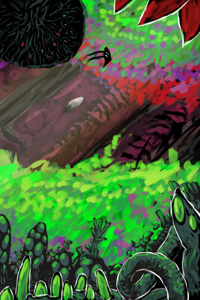 Pylo was a woman of trade and travel!

She had set out for a life of adventure and exchange with strange new life. She would make deals and exchanges with new fools and new civilizations. She would boldly swindle like no one had swindled before.

It's a Weird Universe Out There

Terrans meet aliens. Aliens meet Terrans. Both sides have pretty much the same opinion: bunch of weirdos, but I think we can work with them.

Pylo is a perfectly normal crew member on a perfectly normal interstellar cargo hauler, trying to make a living by buying cheap and selling high. The trick is to read the contracts really carefully because, boy are those planet-evolved bipeds picky... and crazy... and mentally limited. But she would never say that, because she is a professional. But:

Her latest contract will make her learn far more about Terrans than she ever really wanted.

The story switches POVs between Pylo, her ship, and the Terrans she meets. Of course, every one thinks they are acting normal and the xenos are doing really strange things. There is some comedy, but this is not a sitcom.

The author's story tags are accurate, although I haven't seen any VR yet. However, despite the author's summary, the only real problems so far are misunderstandings, not fraud.

I like it because it is good writing that is very different from my normal Isekai / reincarnation / time loop / etc. preferences. To me, it's essentially alternate mental snack food. It also helps that the author apparently has a serious backlog and is releasing quickly - the mental potato chips are being supplied regularly. Give it a try, unless you hate multiples POVs or slice-of-life stories.

Reviewed at: Approach With Tunie

Everyone is so very alien, and I love it (but not that way Pylo!)

The world building is excellent, some top notch sci-fi concepts that are original and work to build a setting that really is outstanding. Clever, plausible and very entertaining.

I rarely write reviews but this deserves one. I can't recommend it strongly enough. The characters are a delight and the world building is broad without being overwhelming. The universe is internally consistent.

I'd discribe the story as an examination of what it means to be sentient and what creates and defines meaning. Each of the points of view delight me. Each character has their own way of understanding their reality and that's reflected in their pov and internal narrative. The amount of meaning conveyed through inference is higher than most stories on here - so if that bothers you be aware going in. The style took a little to adjust to, but I'm so glad I kept going. It end's working very well. I'm current with the original site, and left hunger for more. Do yourself a favour and read it.

Alien are not human

Very good story. Aliens /are/ aliens. They are not simply reskinned humanoids but completely different beings, with a very well tought out background in all cases. One of the best stories on this site.

This is the real deal in Xenofiction. It is the best of the GOOD stuff and worth every second spent reading.

If you love Xenofiction at all this is a MUST READ. Show it some love.

A Stuningly Alien Romp through the Universe

I'm not often surprised by the alien nature of extraterrestrials in sci-fi stories I read. And I get it to an aren't why they are almost always just humans but purple or whatever. But this story will absolutely throw you for a loop.

Do you want a sense of scale for the vastness of the universe? For the complexity of life? For the multifaceted forms of being? This is the story for you!

Honestly my only gripe is that they are all somehow capitalists, which is incredibly jarring when juxtaposed with the rest of the story lol.

The characters are both bizzare and endearing all with their own unique strengths and weaknesses. They all have their own voices and views of the world.

It's a heck of a roller coaster and well worth a look!

This story has some of the best alien perspectives I've seen. The author has a talent for writing from unusual viewpoints. Because of this though, there are same areas that are hard to interpret. Overall a good sci-fi if you want aliens that are actually alien in the way they think as well.