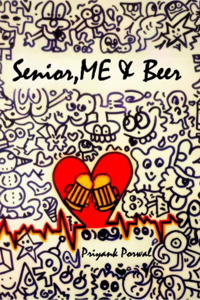 A short story about a young couple who always had an ambiguous relationship, never committing to each other. Before they got the chance to do that, their paths diverged. Now, they have met again by chance, after many years, let’s see how love unfolds their hearts.

Senior, Me & Beer is a project under the company ‘NEW LEAF DIGITAL WORKS’ written by author who goes by pen name ‘Priyank Porwal’ and Edited by ‘Jeevesh Sharma’. Poster concept by ‘Piyush Gupta’ and it is created by ‘Kratika Gupta’.

English is not my first language so pardon me for it

A sweet love story with room for more elaboration

Senior, Me & Beer is a love story between two lovers who finally decide to become engaged after a two year long absence where they didn't see each other. The interactions between the characters are cute and their love is conveyed clearly. Though Barry acts considerably non-american, even though he shouldn't be. It would have been interesting to see his western pov contrast with the indian ones of Raj.

The story itself was short and sweet, albeit lacking in tension and obstacles. Or rather, these were skipped. For a short story format that can be okay though some of the issues the character faced should have been shown more on the fore front. Often scenes felt summarized and one was often told what the characters felt. As the emotional relationship between the two MCs is the pivot of the story, it would help if the author allowed the reader to immerse into the story and see what is happening. Using body language for example to convey emotions would be a good first start.

The author already stated that they aren't a native reader. As such, I'm not going to be too strict on the grammar. But it has to be said that the lack of english profiency does make it at time difficult to follow the story. More clearity in general would help.

All in all, this is a sweet little story. All the right elements are there, but it needs to edited and polished.