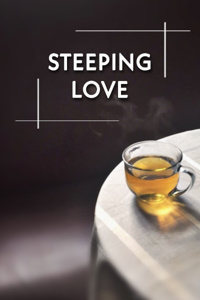 Annabelle's feet thudded rhythmically against the pavement, and she willed her tired body to stay coherent enough to keep from tripping or spilling her tea. She slowed her somewhat hurried pace to check her wristwatch. 10:27. She had three minutes to get to class. It seemed like she was always cutting it close, whether it was to class, to work, or anything else. She sighed and trod on.

Mondays and Wednesdays began with painting class. As she blustered in a minute late, she lamented sarcastically, At least it's only my major. She retreated over to one of the several wooden cabinets in the studio and undid a combination lock, retrieving her materials. Once set up in her little corner with her canvas, easel, cart, and supplies, she finally heaved a sigh of relief. Annabelle really, really hated mornings.

After arranging her paints, brushes, and water jar, she grabbed her portable ceramic cup, lifting off the little rubber lid and taking in a deep breath through her nose. The earthy smell of the Yerba Maté blended with the less noticeable but slightly sharper scent of black tea, and afterwards the blend of nuts, cinnamon, and just barely, cocoa, filled her nose and then her mind. "Jump Start" tea wasn't exactly her favorite, but with three different types of caffeine and sans the jitters of coffee, it was perfect for dragging herself through mornings.

Not much later, she was painstakingly blending the value of the model's lower arm, trying to create a perfectly smooth transition from the highlight on the top to the deep shadow on the bottom, all without washing out the colors of her skin. Her professor wandered near, peering thoughtfully at her canvas. She turned to him worriedly, grimacing self-consciously as he lifted his arm to rest his thumb and forefinger under his chin.

The few seconds of silence felt like years, and Annabelle found herself growing more and more nauseous with every passing moment. Just as she had resigned herself to painting until he voiced his thoughts, (if he was going to at all) Ivan finally spoke. "Technically, it's perfect."

Annabelle processed his statement. "Oh, uh, thank you," she managed, unsure if she fully understood what he meant.

Luckily, Ivan continued. "I mean, your technique is great. You have a great eye for detail, the value and the colors are spot-on—" He paused. Annabelle watched him like a hawk as he moved his hand to clasp his shoulder, right above where his left arm would have begun. She was desperate to know his thoughts.

"It's just, it's missing...passion." Finally having come to some sort of conclusion, he turned his gaze to Annabelle. She immediately tore her eyes away. Heat was rising in her body, and she felt panic and shame take over. "It's beautifully done, but I don't see you anywhere. I see a painting that looks like a photograph, not a painting that tells me, 'Annabelle Yun made this.'"

She forced herself to meet his gaze. Her heart was pounding and she wished she could fold in on herself until she was as small as a beetle. She wanted to say, But it's a study! It's supposed to help us get better at painting the body. How can I make that passionate? How can I make that 'me'? But instead she ground her teeth, fighting back the waves of emotions to tell him, "Okay, thank you. I'll try to do better."

Judging by the look on his face, that wasn't the response he had wanted. Nevertheless, he wandered off to one of the other students, and Annabelle released a shaky breath. She couldn't help but think, I'm never good enough.

At the end of class, she began to pack up her things. The student model had already dressed and left, and students were milling about, chatting and cleaning, some leaving. One of Annabelle's classmates, a junior named Wren, stopped on their way to the sink to wash out their brushes. They examined her painting for a moment. "This looks great!" they exclaimed.

"Oh, thank you," Annabelle replied, pausing her cleanup and beating back nervousness at their comment. "It obviously still needs work, um, her skin tone is really hard to uh, pin down," she rambled anxiously, motioning with the paint-stained apron in her hand and barely daring to look up at them through her eyelashes.

"No, I think it looks right," Wren encouraged, smiling. "Better than mine, at least. I really suck at painting," they added with a laugh.

"Same." Annabelle forced a small, nervous laugh, looking down at her flats. She glanced back up as Wren began towards the sink again.

"No way, you're too hard on yourself," they insisted, dumping out their small bucket of paint water.

Annabelle was just beginning to search for a reply when another student called from across the room. "Wren!" It was a boy named Jacob, his hand entangled with his boyfriend's, whose name currently escaped her. They were standing next to two others, a girl named Alice and another person Annabelle couldn't name. "You still coming to Davis with us?"

The Davis building was the campus dining hall, and it was lunchtime. Jacob had reminded Annabelle just how hungry she was. She hadn't had time for breakfast.

"Yeah!" Wren answered, raising their voice just a little over the sound of the running sink as they cleaned their brushes. Annabelle remembered that she, too, ought to be cleaning up and heading out, and resumed her routine. Just as she was about to walk over to the sink, Wren finished, wiping their hands on a paper towel and turning to their friends. "Meet me at my locker."

Wren's friends headed out the door closest to them, and Annabelle passed Wren on her way to the sink. They quickly scooped up the rest of their supplies and started for the other door on their side of the room. "See ya!" Wren called without a glance.

"Bye," Annabelle answered, barely above a whisper. But the door had already closed. She watched through the door's window as Wren met up with their friends, opening their locker and putting away their painting materials before heading off to the dining hall. Annabelle stared at their retreating forms wistfully until they disappeared from view. She felt a longing tugging at her. She looked around the room. Somehow, in the time it had taken her to get halfway through her cleanup, the studio had emptied. She was alone.

She silently scrubbed her brushes, put away her supplies, and left.

please let me know any feedback you have. thanks!!

Bio: i’m new here; just trying to figure the site out and hopefully get feedback on my writing. let’s be friends!