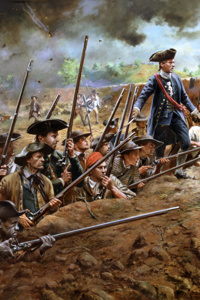 Chapter 59: Peace in Our Time

"The Honorable Mr. Charles James Fox, the Secretary of State for Foreign Affairs of His Majesty's Government, is entering."

John Adams, John Jay, Richard Henry Lee, and John Laurens stood up and greeted the British foreign secretary politely. The British entourage consisted of Fox, Duke Charles Lennox (the Master General of the Ordnance), and a few other aides to ministers within the Rockingham Ministry The mood in the room was tense, especially between the British delegates. Negotiations had started just a week ago, yet the talks between the two nations were slow. While it was clear that the Americans held the upper hand in the meetings, the British were unwilling to concede to the Americans easily and were doing everything they can to extract some sort of victory from the peace talks.

"Mr. Adams," Secretary Fox said as he began the meeting, "Have you considered the terms that His Majesty's Government offered at our last meeting?"

"I have read the terms and discussed it with my fellow representatives. While they do fulfill most of the terms that we offered during our first meeting, I must politely decline on behalf of my government." Adams carefully answered.

"May I ask what part of our offer displeases you?"

Adams pulled out the parchment with the listed terms the secretary gave to him several days earlier. He cleared his throat and read out the conditions that were marked, "There are two conditions that we find unsatisfactory. The first condition is the return of Bermuda to Great Britain upon signing the proposed treaty."

"We have offered all of the North American possessions in return for Bermuda, have we not?"

"Perhaps, but I must daresay that the remaining British possessions in North America are within our reach if we so desired. The only reason we have not done so is because of your current conflict with France and Spain," The chief American ambassador smiled, "After all, the fall of the remaining colonies in North America may spell disaster for your nation's efforts in the Caribbean."

Secretary Fox grimaced, "They are still under our control, ambassador."

"Which is why I have a counter-offer; Britain will have basing rights in Bermuda and East Florida for ten years, in exchange for the cession of all British territories in North America, including Bermuda. We will also offer substantial monetary compensation."

"For merely basing rights?" The British minister scoffed, "That is preposterous."

The Bostonian didn't flinch, "And our neutrality in the conflict. However, if His Majesty's Government is unwilling to concede, then we may potentially turn to other nations in order to fulfill our objectives."

Instantly, Adams saw conflict on the man's face. He knew that if the secretary refused his offer outright, then it would lead to unrest within Britain. The British public and even the British Parliament were weary of the war against the United States. Thanks to John Laurens, who studied in Britain and mingled with the higher members of society within Britain up until recently, Adams had a fairly clear picture of the current mood of the British public. Rockingham's position as prime minister was still unstable, the British government had used up far too many funds and men for little gain, the British military had been humiliated, and the British had allied with very unpopular groups (primarily the Loyalists) during the conflict. A stall in negotiations would only help strengthen the American position in the talks. Along with the thinly veiled threat of continuing the war (with potentially more British defeats), the American delegation had driven the British delegation into a corner.

"I will discuss this matter with Lord Rockingham," Secretary Fox said with a frown.

"The second condition that we were unsatisfied with was the compensation for any Loyalists who lost their properties or possessions during the war. We are willing to compensate Loyalists outside of South Carolina and Georgia."

1) His Majesty's Government (of Great Britain) will officially recognize the states of the "United States" as free and sovereign states and that the British Crown and all heirs and successors will relinquish all claims, possessions, and territorial rights within the states.
2) Lawful contracted debts are to be paid to their respective creditors on either side.
3) The Continental Congress will fully compensate for the confiscated properties and valuables of British subjects (Loyalists) seized by the Continental Army during the war. This compensation will be made over a period of several years, the exact terms will be negotiated at a future date (with an exception to the properties and valuables seized in the colonies of South Carolina and Georgia).
4) The Continental Congress will no longer seize any properties and valuables of British subjects remaining in the "United States" and will provide safe, speedy transit for said British subjects upon their request (with the exception of those in South Carolina and Georgia).
5) Prisoners will be freed on both sides and returned to their respective countries safely. All equipment and valuables that belonged to the British Army in North America are to be relinquished to the Continental Congress.
6) (Disputed) Great Britain will cede all of its North American possessions that are under their control (West Florida, East Florida, New Foundland, Rupert's Land, Prince Edward's Island, Northwest Territory, the Indian Reserve) to the states of the "United States" in exchange for basing rights, monetary compensation, and a guarantee of American neutrality in the current conflict between Great Britain and the Kingdom of France and Kingdom of Spain.
7) All territories claimed and seized by the "United States" during the War between the "United States" and Great Britain will remain under American control and be officially recognized as a part of the "United States."
8) These terms are to be ratified and enforced within six months of this treaty's signing."

Adams nodded his head, "We may have a few more suggestions and changes in the future, but we are most satisfied with the current proposals."

"I will discuss this with Lord Rockingham within a week. Until then, farewell." With that, the British delegation left.

Once it became clear that the British delegation was gone, the "Second" President wiped his forehead with a handkerchief, "That was much more difficult than the last time I met with him. I half-expected him to leave the meeting in a storm of rage."

"Well, our position is certainly much better right now than the other history," John Jay mentioned, "But good God, I did not imagine that this would be happening so rapidly."

"It's well known that Lord Rockingham wants a peace deal sealed quickly and he is far friendlier to the United States than the "other" prime minister. It also helps that the British have been bloodied in every battle they fought in," Lee stated.

Lauren, the youngest member of the delegation and a new addition to the Watchmen Society, shook his head disbelievingly, "I was ready to return to the colonies and enlist, but before I could even arrange my trip back to the Americas, the war was over. May I ask why you entrusted me with such a huge secret and allowed me to take part in this negotiation?"

"Your father was... one of the "traitors" as you already know," Adams said solemnly, "But we managed to uncover your history in the other world and believed you would be suitable for negotiations. Your knowledge of the views of the British public was invaluable and your patriotism was commendable. Additionally, General Kim himself was quite moved by your passion and anti-slavery rhetorics in the other history, which is why you are here."

The South Carolinian looked sheepish as he looked down at the ground, "I am still young, Mr. Ambassador, but I have been burdened with a great secret and important task. I am honored by the responsibilities given to me, and I will not fail you. Or die early, like my "other" self."

"That is all we need, Mr. Lauren," Jay nodded his head approvingly, "South Carolina is currently in chaos and very few capable men are left in its government. In due time, once the Constitution is ratified, perhaps you will play a critical role in the state's politics and guide it to a brighter future."