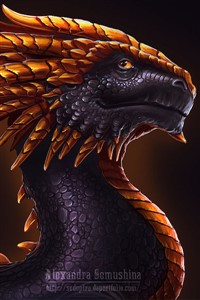 A black haired noble boy sat in his room, reading the Tales of Varia. He was engrossed in the extravagant stories, reading of gallant knights saving princesses from evil lords, and brave little tailors who went on to become famous heroes. He read of hunters who brought down wyverns, and lords who lived in castles in the sky.

The boy’s name was Forte Mott, and it was the eve of his nineth birthday. King Richard Barron and his daughter were visiting the Mott estate today, and Forte dressed in elegant attire to greet the king. He walked down the stairs, when he stopped and saw the king standing in the front door, already conversing with his parents. The boy had met the king once, a year ago, and the portly man seemed generous and affable. But tonight, he wore a serious expression with gaunt eyes.

“Come in, come in!” said his mother pleasantly.

The king entered the Mott estate with his daughter in hand, a beautiful six-year-old girl with refined, almost elven features reminiscent of her late mother’s. In her hand was a stuffed doll of a bear. Despite her cute appearance, she had an air of haughtiness to her.

Behind the king walked two servants dressed in fine night gowns. After the servants, four slaves entered with an impressive buffalo-like creature dangling from their shoulders on a spit.

“I heard that it was your boy’s birthday soon. Here’s a surprise for him,” the king boasted, gesturing at the slog. “Prime cut, this one is. Had it brought to me straight from the western plains.”

Forte’s father examined the beast. “How can we thank your generosity, your majesty?”

A smile broke out from the king’s tired face. “You may thank me at another time. But tonight, we feast!”

The slaves lugged the carcass towards the Mott estate’s kitchen. Forte’s mouth watered simply thinking of the slog. He descended the remaining stairs, just as the king’s entourage entered the dining room.

“Come to the dining room, Forte,” called his father. His voice echoed through the estate. The boy walked into the dining room, and was immediately overwhelmed by the sheer amount of food on the table. There were meat pies and blueberry pies, jams and breads, spiced ales and roasted duck, and many other fine dishes.

“There’s my boy,” bellowed the king at the sight of Forte. “He’s growing big and strong. And here’s my gift to you!”

Forte noticed that the serious expression the king wore when he entered melted into the same affable king he met once before. The doors to the dining room swung open as servants brought out a massive, glistening cut of roasted slog. Forte’s eyes widen in anticipation.

“The freshest cut of slog in the whole kingdom—straight from the western plains,” the king roared. “Now, let us feast!

Forte dug into the suckling duck and roasted slog. The roasted slog was cooked to perfection, both tender and juicy while having just the right bit of pink inside. Forte devoured his cut and asked the servants to serve him more.

Princess Scarlett sat across from him, slightly to the left. He noticed that she barely touched her food. She motioned for a servant, and pointed towards her plate.

“Sister, the peas are touching the duck. I want a new plate.”

The servant wordlessly took her plate, coming back a few moments later with a new one. Forte glanced at the king, who simply laughed at his daughter’s antics.

They dined for hours. Once Forte was finished, his mother placed him and Scarlett into a play pen together, as a group of servants looked on. Forte grabbed his favorite toy, a wooden sword, and began swinging at imaginary enemies. Scarlett sat in the corner and brushed specks of dirt off her stuffed bear.

“I don’t want to talk to you,” Scarlett replied, as she took some of her hair and rolled it between her fingertips.

Taken aback by her harsh response, Forte answered back in kind. “Well you’re out of time anyway.”

He saw his mother heading towards the play pen, as the king barked some orders to his servants. The king’s cheerful expression was gone, replaced by a look of weariness.

“Say goodbye to Scarlett, dear,” mother said, with an exasperated look on her face.

“Goodbye, Princess,” said Forte, pointing his wooden sword at Scarlett as she was liften from the play pen by the king’s maid servant.

“Bye,” she replied, continuing to brush her bear and not once looking back at him.

Mother carried Forte upstairs to his bedroom and tucked him in. She kissed him on the forehead.
“Your dad and I have to take care of some business in the Kari mountains. We’ll be back in an hour, or two at most. Good night, honey.” His mother whispered, as a slight frown settled on her face. She kissed him again, this time on the cheek, as he drifted into a deep slumber, dreaming of twirling bears and swinging swords and the delicious aroma of roasted slog meat.

Forte woke up a few hours later grumbling. He enjoyed the fizzy drink from dinner so much that he went down to the kitchen after his parents left and begged the kitchen servants for some. Now, the drink was taking a toll on his stomach. As Forte got up to go to the restroom, he gazed outside his window at the light snow falling and the stars in the sky. 'Just like in the books,' he thought. And then he froze.

Something was wrong. The moon was high in the sky, and yet his parents were still not back. But that was not what alarmed him most. For years, when Forte got up in the middle of the night and looked through his window, he would be comforted by the sight of Brother Thom, their house’s servant and gatekeeper, in the outpost by the gates, huddled in thick coats and rocking back and forth as he read under the candlelight. And yet tonight, the candle in the outpost was not lit, and the gates were wide open. 'Brother Thom must’ve needed to use the restroom too,' he thought, as he headed out of his room to the relieve himself.

As Forte reached the staircase, he heard the faint sound of a pair of heavy footsteps, coming from downstairs. Suddenly, a hand enclosed his mouth from behind.

It was his family’s maid servant, Sister Silvia. She put her head close to his and whispered into his ear, “I don’t know who these men are downstairs. You be a good boy and stay in your room, okay? Hide in your room, and don’t make a sound. Good boy.”

Forte nodded his head as Sister Silvia loosened her grip on him and pushed him towards his room. Forte quietly sprinted to his room and hid under the bed. After a long period of silence, Forte’s hair stood on end as he heard Sister Silvia’s shriek ringing through the estate. I have to warn Brother Thomm, Forte thought as he unlocked his window with shaking hands. He pulled down the window with his pudgy arms and forced himself out of the window, sliding down using the pipework running down the side of the mansion that facilitated rainfall.

His feet plopped on the ground, the sound masked by the snow, as he ran towards the outpost. His hands were still stinging from friction as he rean towards the gate. Forte reached the outpost and jarred the door open, only to be struck by a foul stench of blood and sweat. Brother Thomm lay on the ground, dead, clutching his book. There was a stab wound through his mid section, and the blood had seeped through the old man’s heavy coats. Forte felt a warmth spreading in his pants.

Another shriek originated from the estate behind him. Forte slammed the door of the outpost shut, stomach still lurching, and began running as fast as his body could take him, away from his family’s estate and into the direct of the Kari mountains.

Bio: Thanks for reading!