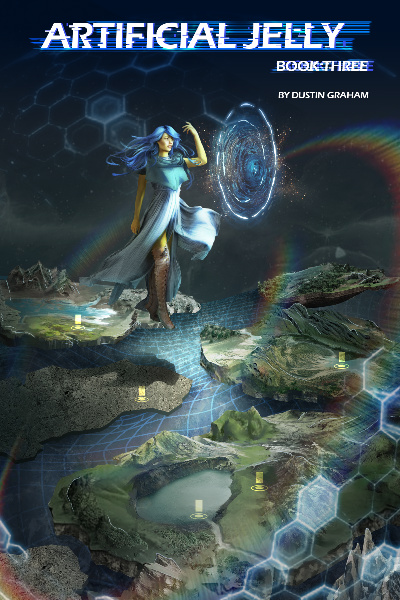 Chapter One – To Smile Again

Remove Ads
Previous Chapter
Next Chapter
A note from Materia-Blade

A/N: Okay. So I've wallowed enough lol. It's been a long time in coming, but its time to start again.

Artificial Jelly: Book 3. Finally. I don't have as much backlog as I would like but I have to start posting again or I'll never get to where I need to be. I need the guilt about missed updates! I need the motivation. So a new book and a new update schedule!

I'm going to try for chapters on Sundays, and Thursdays this time. Lots has happened since you folks last heard from me but I'll talk about that at the bottom A/N.

I hope you all enjoy!

PS: (Is my cover artist not the absolute awesomest?)

Chapter One – To Smile Again

"Hiya adventurer!" came a bright voice as a stone-bordered box filled my vision. The words written within the box that made up Miss Tutorial’s body were the same as the ones that woke me from my comfortable nest.

"Miss Tutorial, really?" I asked the open air as I fluttered back into consciousness.

"Hi, Gell! "Came the frustratingly peppy voice once more. "Bugbears are dangerous creatures – without their friends."

So it would be the bugbear tactic today. Nothing quite like a good guilt trip to start your cycle.

"Miss Tutorial, I just don't feel like it. Could you maybe talk to me in a few cycles?"

Lately, Miss Tutorial seemed to have taken it upon herself to be the most annoying friend she could possibly be. I thought she might be trying to cheer me up, which was admittedly a bit harder of a task than it once was.

"Don't set a reminder! I just don't want to talk right now. I'll reach out whenever I need something, okay? So why don't you just go be a tutorial for a while!?” I snapped.

There was a long pause and I immediately felt guilty. Not enough to apologize though.

"Oh don't be like that!” I groaned, nuzzling myself further into my new bed-glove. This one, not at all smelly like my first one had been. “I'm just... tired."

Your Health stamina and mana are all at one hundred percent!" Miss Tutorial said, sounding almost petulant.

"Not that kind of tired," I breathed, wishing I could explain my sadness to her without breaking that delighted innocence with which Miss Tutorial seemed to see everything.

I snuggled back into the palm of my glove to block out the beautiful sunshine spilling in through the window of the home Bugbear and I shared. Birds were twittering outside, singing merrily.

The previous cycle had been filled with storms in the night and now everything was wet and glistening. I could smell the moisture in the air and almost feel the sogginess of the outside. Cool. Breezy. Perfect.

"I liked the storm better," I thought, annoyed.

The worlds had moved on.

Bellcandy and Zephyr had reached out just twelve cycles ago over the message system. The usual pleasantries. How was I? How was Bugbear? Did I need anything for the house? Had we seen Liqheist the Raptor nibbling on the walls again? The usual nothings they always asked over messages.

Bugbear and Miss Tutorial were as happy as ever. Neither of them seemed to understand how the world had changed so irrevocably. Yet again, I’d changed while my friends remained the same. Not ‘Jabbering Gell.’ Not ‘Adventurer.’ Just… lost.

How many cycles had there been since I'd cried last? When I reverted to my human form my eyes didn’t even water up anymore.

I felt numb, depressed, and angry in turns. Where normally I would go to my friends to assuage these things, that no longer seemed appealing. Instead, I just curled up in the glove that I didn't need and let the hours pass by. Cycles changing one to the next, unnoticed as my thoughts spun in an ever-darkening circle.

"I'll lose them all. Someday. Iron Crock, Bellcandy, Zephyr Bird... even Akwa. They'll all die. So is there a point?"

She was right, and I knew it.

In my head, I knew how valuable all the people that I met were. How precious the time I had with them would be after they were gone. But somehow I just couldn't make myself get out and go to them.

The veil of joy had been lifted and now I saw the Great-Open for what it was. Cruel, painful, and filled with good things that eventually all broke anyway.

God that was depressing. Why was it so hard for me to be happy? I… loved Amy. I loved her as I’d never loved anyone, but I loved the others too!

I squeezed my body a little way out of the glove and realized my tentacles had been really cramped as I stretched them out in the bigger space now afforded to them. How long had I been sleeping?

I pulled up my friends list only mildly curious to see who might actually be in this world.

Sure enough, Bellcandy and Zephyr bird were logged in. They almost always were lately, and were more and more often in the same zones.

Iron wasn't of course. I hadn't actually seen him since the funeral. I suppose he must've been spending his time with his granddaughter, North Cross, and the son that I had never met.

North Cross had the most beautiful voice I had ever heard. I wondered idly if maybe her songs could ease the ache in my jelly innards.

Akwa wasn't logged in and again I wasn't surprised by that. She had spoken of her job on several occasions and explained how jobs took precedence over visiting this world. Apparently, she was something of a celebrity and other people would give her funds just to watch her live her life. I didn't really know how that worked but it sounded nice.

Well, it sounded as nice as anything did, these cycles.

I jumped as a sudden roar shook the house. I slid out of my glove and almost toppled all the way to the floor before irritation took over surprise.

"Oh, shut up Bugbear! You've seen them 1 million times! How are you still shocked by the stupid dire squirrel!?" I shouted knowing exactly what Bugbear was growling at and knowing that no matter how many times I explained it the damn squirrels would still set him off.

“Danger!” he shouted, bursting into the doorway with all the fervor of someone seeing the Great-Open for the first time.

The same as he had last time...

And the time before that...

And the time before that.

“Bugbear. Please… you’ve got to figure this out. The stupid squirrel comes here every morning cycle. Every single one. That’s its Instinct. It’s… behavioral programming. So there’s no need to freak out every time you see it, because it’s the same thing you already saw, and the same thing you’re going to see in two more cycles. Okay!?” I scolded, floating back up to the beautiful birdcage that held my glove-bed.

I was about to slip back into it when another voice rang out about the house.

“A-Akwa!” I jumped, feeling a strange mix of excitement and dismay at seeing her. She must’ve just logged in and teleported to Jungle Home. “What… uhm. I didn’t expect you. What do you mean… regressing?”

Akwa was giving me a concerned look. Worried, even.

“You… and him both have behavioral code, right? It no longer affects you because the devs made you into players, but maybe that’s not entirely true. Maybe he’s… slipping back into a cycle. It’s familiar. Easy to fall into…”

I looked at her, horrified. I morphed back into my human form but couldn’t find myself forming any words.

Regressing? B-becoming enslaved to the cycle again? Th-that couldn’t happen. It couldn’t! I was… we were free of that!

“Th-that’s crazy. He’s not regressing. Becoming like the NPCs and the Mobs. He’s just grown comfortable here!” I insisted.

Akwa looked at me hesitantly.

“Maybe not,” she agreed uneasily. “It's more likely just the normal rut people fall into when they don’t want to do anything new. When it’s easier to wallow in sadness than it is to try to find new things in life. But Gell… you’re as free now as you might ever be. Why don’t you and Bugbear come to the city with me? We’ll spend a day swindling suckers at the markets or building stuff. I… I picked up the Weaver profession, you know. I’d love to grind with you a little. Maybe show Bugbear a few new things? I’ve heard some weird new event has been happening with the King there. Sound fun?”

I shook, my body physically trembling as I wrapped my arms around myself.

Go… go out? To Variak? Yeah. That sounded good. Fun even! So why did I feel almost nauseous at the idea? How long had it actually been since I’d left my glove-room? Ten Cycles? Twenty…? F-Fifty?

I squared my shoulders and managed to calm the shaking down to a slight tremor. “Yeah. I’ll… get my stuff.”

‘Out into the Great-Open once more, huh?’ I thought, as a familiar, but long missed emotion began to tingle in the pit of my stomach.

So, a lot has happened over the past year. I had two impressively successful books, put them on amazon, and then got my ass kicked by the tax bill lol. I've moved houses, making the monumentally stupid decision of trying to keep our old house and turn it into a rental (which has been somewhat successful but stupidly stressful.)

New Job (since I clearly can't cut it as a full time author!) And all that entails as well all in the midst of this.

It's been a hell of a six months. Why not throw writing on top of that eh?

Not only that, but I'm working on another story as well! Prologue is on the patreon for that one but I'm waiting on cover art and a muuuuch bigger backlog to post. Also, 7 Chapters of this story are available there as well, but I'll be attempting to grow the hell out of that backlog over the next few weeks.

The first two books of Artificial Jelly are available on Amazon for anyone who might have missed them and has somehow made it here. I hope you'll give them a look if this story looks like its one that might interest you!

Look forward to a new chapter on Thursday!
Till Next'
MB

I'm Materia-Blade. I've been a long time fanfiction writer, and have recently decided to toss my hat into the original fiction arena. I love fantasy, sci-fi, and Lit-RPG's and have read hundreds of books from each genre.

My new story Artificial Jelly has released and is currently being pretty well received! Excited for it to hit trending! Thanks to those who support it, and me, and I hope it continues to impress!

Hope to hear from you soon!