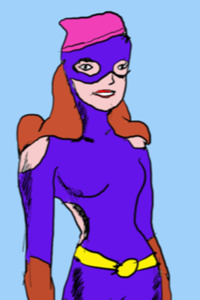 Invulnergirl had to admit she was impressed by how she was overshadowed by the growing form of Maximizer. He’d grown so tall he had to sit on his knees to fit inside the room.

Epps pointed his shotgun at the villain, but one slap with a hand as big as a coffee table sent it flying across the room. Epps went for the pistol in his shoulder rig but Maximizer grabbed his hand and squeezed. The sound of crushed bones nauseated Invulnergirl.

She grabbed Maximizer’s arm and tried to tear him away from the police sergeant. He was way stronger though and didn’t budge.

“Irritating gnat,” Maximizer said and with his other hand slapped Invulnergirl across the room. She bounced on the floor like a pebble thrown at a river.

Getting back on her feet she saw Maximizer throw Epps against the roof. There was a loud crack as Epps fell back down on the floor, unconscious.

Hank and her mom were curled up against the wall, afraid Maximizer would hurt them next. She wasn’t going to let that happen, though. She ran full speed towards the villain.

“Coming up for seconds?” Maximizer said. He readied his hand for another slap.

Invulnergirl grabbed it, hanging on to it while he tried to shake her off. She took a deep breath then sank her teeth into his hand, thanking her years of taking good care of them. Strike one for good dental work.

Maximizer screamed, calling Invulnergirl something very sexist and unfriendly. She’d hurt him so much he got up a bit, knocking his head against the roof. Plaster rained down. It turned out he might big and strong, but not invulnerable like she was.

“That hurt! I will kill you for that!” Maximizer said.

“Do your best, you big baby!” Invulnergirl mocked the villain as she ran for the wall of ice.

Growling, Maximizer came at her. Just before he ran into her, Invulnergirl jumped up. Using Maximizer’s big neck, she box jumped over him. She heard him crash into the wall of ice.

As she landed and looked behind her she saw the big villain had crashed through the ice. It had left him not only unconscious, but also had broken the wall. Just like she’d planned it to.

“Thanks,” Invulnergirl said. “I think I saw something like that in an old cartoon.”

“Who says you won’t learn anything from watching TV?” Hank chuckled.

Invulnergirl joined her. Epps’ right hand looked like it was broken in several places. He was bleeding from a bad headwound as well.

“We should get out of here,” Hank said. “What if more bad guys turn up?”

“He risked his life to save us. I’m not leaving him here,” Invulnergirl said.

“If we wait too long those efforts to save us might have been in vain,” Hank said. “Maybe he would want us to leave him here.”

“No discussion. He comes with me or I don’t go. You can go on by yourselves if you want.”

Hank sighed. “All right then. Who knows first aid?”

“I do,” Mom said. We should find something to bandage his head, stabilize him. After that, maybe we can take him with us.”

“He will really slow us down, he’s pretty heavy,” Hank said.

“Aren’t you strong enough to carry him?” Mom asked Invulnergirl.

“Sorry, I’m indestructible. Not super strong. But I have an idea. Look at this,” Invulnergirl said and carried over a desk chair that had wheels. “We could put him on this and push him forward.”

“That will still slow us down, but I guess that’s a good idea,” Hank agreed.