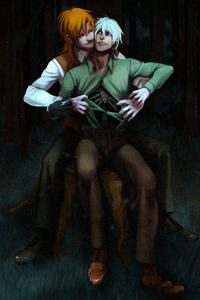 An LGBT+ mystery/horror time loop story set in the world of The Legend of Zelda: Majora's Mask.  The characters and story are my own.

Lance Wisteria is a young man that never imagined himself to amount to much of anything in his life. When his mother falls gravely ill he takes it upon himself to pursue a rumored cure lurking in the Woods of Mystery. It is here he has a life changing encounter with a darkness that made its home in the depths. His soul is nearly stolen, but not before being interrupted by a mysterious white-haired being who takes pity on him.

The next time he opens his eyes he's in his bed, and it's two days prior to the incident in the woods. Mystified by dreams of a forgotten time, Lance sets out on a journey to understand the meaning behind his death.

Has a lot of potential

Unwind features great characters and an interesting story so far. Because it's a Zelda fanfic, it does assume some level of familiarity with the Legend of Zelda (especially Majora's Mask) lore, but the story was easy enough to follow even for someone like me who isn't very familiar with Termina or its inhabitants. The fact that the main cast and most of the supporting characters are all (to my knowledge) original definitely helps with that!

Story: It hooks you in from the very first chapter and I've been enjoying it so far! The world building was thorough enough (especially with fleshing out the politics of the region) that I could understand the story even without much LoZ knowledge (I've only played Tri Force Heroes). I'm a sucker for a good time loop story, and this one is shaping up to be interesting so far.

Characters: Good characterization, with even the main character's family and friends being pretty well explored despite being side characters. I honestly wasn't expecting such fleshed out original characters from a fanfic, so I was pleasantly surprised! Especially loved the dynamic between Lance and Aryn, and I can't wait to learn more about Bael.

Style: It might be because I'm too nitpicky, but I felt like the writing style somewhat holds the story back. It's servicable for getting the point across but could definitely use some work. The quality varies from section to section and was actually pretty good in some places, but a few things I noticed were: some sentences tend to run too long, occasional confusing pronoun use (switching between they and him, him used ambiguously in scenes with two male characters), repetition of the same or similar word twice in the same sentence, and some awkward phrasings here and there. I think the story would greatly benefit from extra proofreading with special attention to clarity and variety of sentence structure/length.

Grammar: Tying into a tendency for run on sentences, there were some places where commas were missing which made those sentences read a bit awkwardly, but fine otherwise.

Overall, I'm interested in seeing where the story goes! The story definitely has a lot of potential, and even if you aren't a Zelda fan I would recommend checking it out if you like mystery, fantasy, and/or time loop stories.

Reviewed at: 3. Back Alley Talk

Deku hehe, okay, in all seriousness, you did a great job at world-building. The story was vivid and captivating! I just wanted a little more from the protagonist, so I understand him, but maybe I will later on because it's too early to tell. He seems a little uptight atm, but maybe, that's just because of his "encounter" in the first chapter. I don't want a spoiler in the review lol. AND OH, plot twist, later on, didn't see it coming. The story has a lot of mystery right from the very beginning, where I want to know certain things like how and why things are happening. There is humor in the story that I appreciate. It's subtle but effective. Overall, it was enjoyable with each chapter, it got better and better! :)

Reviewed at: 8. Come and Burn

Story grabs you right from the start with a pretty intense opener about the absolute rules of the world. Lives up to the somber, broody vibe the author tries to portray and the monsters. The grammar is phenomenal to top it all off.

Even though I don't know much about the world of Zelda, I was able to easily follow along without hassle. Figured out everything easily as I went. Deffo recommend if you like the genre (or Zelda).

Upon further reading, I can deffo say the story is a keeper. It doesn't lose momentum.