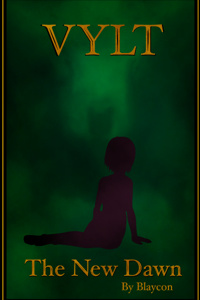 Mankind finds a way to use magic, but this great power comes with a price. A transaction that can't be refunded. Nora Hayes is a simple girl whose only worry was graduating  high school. That is, until she faces this new reality. How will she, her family, and her friends deal with the aftermath of such event?

Next to the kitchen, there was a small squared table and two wooden chairs, each made from different wood. The bookshelf behind those contained a decent amount of books.

I stood up to take a closer look at them and even opened a few out of curiosity. While I could read most of them just fine, some of the oldest-looking books were written in a language I didn't recognize.

"Hm? Was my hand always blue?"

I didn't remember. In fact, I couldn't recall anything about myself, not even my name. Inspecting the rest of my body, I found that it was the same all over. I didn't feel sick; quite the opposite. Still, my blue skin felt out of place for some reason. Trying to find an answer to my situation, I kept investigating the odd room.

Big thanks to Alice Griffin for helping me out with the cover.

by Ankur_93 Thursday, October 1, 2020 6:14:37 PM
This novel is not what you would expect from a novel of this genre. As rather than being an apocalypse novel, it seems to be taking the approach towards the slow integration of magic. The way magic is introduced into the world is also quite interesting as it is not through System or some grand event but through a virus which has a very low infection rate.
This Virus changes people into mutants or changes their race into fantasy ones while granting them access to magic. However, as much time has not passed since the resurgence of magic, the field is greatly unexplored.
The prologue of the story is also interesting. It is a scene from the VMMRPG, which seems odd at first glance. However, as the story progresses, it seems like the prologue has a much deeper meaning than originally assumed. Maybe it hints at the magic that the MC will possess. We will have to wait and see.
As far as grammar is concerned, I have no complaints. The characters are also quite believable. In the initial chapters, you would question some of MC’s actions but the reason for those becomes apparent soon after, leaving you wondering at the brilliance of the author. Overall, this is a good novel.
Report

Very unique and worth a read

Reviewed at: Chapter 23: Who's There?

This work manages to pull in the trope of fantasy resurgence and do it in a way that is somehow believeable but also quite human. While there are other stories set in the same vein the reason I say that this is unique is the extensive focus on the processes in which magical changes are occuring. Because obvsiouly the government would react should something like magic suddenly appear, and not only that, but if not everyone got it at once, then the ever present human condition of fear, paranoia, and jealousy will make an apperance.