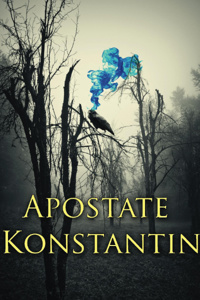 New Chapters will be posted Mondays, Wednesdays, and Fridays. (Except there will also be a chapter today, since I missed yesterday! Oops!)

Silence. Konstantin was careful now. Merlin’s home usually bustled with caretakers. Apart from cooking; the elderly scientist was wholly incapable of completing daily chores himself. He would do his research naked if he didn’t have somebody to set out clothes in the morning.

It appeared the dour native staff didn’t consider certain death to be part of their contract. They had all fled.
Konstantin prowled through the house; giving each empty room he passed a cursory glance. It was a big place, in the old style, with many small rooms, and narrow crooked hallways. Brilliant sunlight streamed through the numerous windows. It was a glorious spring day outside. Evil had no right to intrude.

The base of the stairs. A bloody foot print. A lamp knocked askew. Konstantin sniffed the warm air. The carrion smell of death was strong. Rex had been this way.

A scream shattered the quiet stillness. Konstantin charged upwards, taking the stairs two, three at a time. At the landing he almost tripped over a curled up form. It was the wrinkled little walnut of Merlin. He had a lot of blood on him. Konstantin bent to retrieve the vintage revolver Brita’s father had been carrying. Merlin surprised him by groaning. As black and tough as Iceland’s obsidian roots, the old man was still alive.

Konstantin left him where he lay. There was nothing he could do at the moment, and there was somebody screaming upstairs. He ran on.

The door to the twin’s room was at the top of the stairs. Konstantin had a running start, but the door was solid cherry. It resisted his first impact. Reeling from the blow, Konstantin backed up to try again. The screaming had stopped, leaving bone-chilling silence in its place. Gritting his teeth, he pressed his boots against the wall, his hands on the floor before him like an Olympic sprinter. Growling with effort, the slender young man again launched himself at the door. This time he blasted through, turning solid wood panels into so many matchsticks and toothpicks.

Rex had already departed, exiting via the balcony with a twin clutched under each arm.

The girl’s room was a riot of mismatched colors, not something the blind girls would notice of course, but an effect that sighted visitors often found overwhelming. As long as it was soft and fluffy the twins were happy. Here they were safe from bumped heads and stubbed toes, hazards they found in abundance if they ever let their concentration waver in the outside world.

Rex had departed with the twins, but the room wasn’t empty. His sister was lying against the richly curtained wall beside Mist’s bed. She wasn’t breathing.

He had always been broken man. Deep inside himself dwelled something dark. Born of fear and pain, it had been spawned in the dungeons of his childhood. The hierarchs of his order had recognized it, fostered it, and directed it. It had been his close companion on the hunt. It had almost consumed him in the Wilds. It had allowed him to assassinate two warring chieftains on the same day, in cold blood.

It was usually a tiny black thing that lived nestled in the damp nooks and crannies of his small intestine, periodically creeping up to tickle his rib cage.

Not this time. This time it was an inexorable wave, an overwhelming urge, an explosive force.

It raced up his spine and took root in his lower brain, that place where man is beast, and emotions live before they are given a name. Its icy claws gripped his broken heart and tore it asunder.

Hate filled him, and Hate overfilled him. Hate oozed from his pores in wispy black tendrils, like steam after a summer rain. There is magic in Hate. It is the bad kind.

Konstantin leapt from the balcony, into the spring sunshine.

He hit the ground hard, landing amidst the flower and shrubs which encircled Merlin’s house. Ignoring the bracken tangled in his hair and clothes, he climbed to his feet and took off running after the dark splotch in the otherwise clear sky. His blood boiled. Rex was getting away.

There was a hubbub behind him. He looked back, witnessed Merlin’s sedan roaring across the lawn, tearing great strips in the manicured grass. It slid to a halt beside him. Deirdre was inside.

Even blinded as he was by rage, Konstantin responded to the threat in the black-skinned witch’s voice.

He pointed at the swiftly departing airborne Inquisitor. “He killed Brita.”

Deirdre’s jaw clenched. She had been crying, her eyes were puffy and red, and her normally perfect complexion was blotchy.

“What were you going to do, climb a tree and grab at his ankles?”

Konstantin wasn’t in the mood to be criticized. He made to step around the idling car. Deirdre’s will hit him like a ton of bricks, pulling him back toward the passenger door.

“Calm down damn it. He has the twins. Wishing isn’t going to get him to fall from the sky onto your lap. I don’t know what you’ve done to yourself, but my guess is you wouldn’t know how to control whatever this is enough to not hurt the girls.” She could see the black steam still curling around him like a molasses fog as well, “Luckily that’s not our only option. You promised those girls you would protect them, remember. So help me protect them, and GET IN THIS DAMN CAR.”

Merlin’s mighty car whirred. The traffic was light. In record time they were screeching into the secure parking lot outside the local Coast Guard compound. Iceland never had gotten around to building itself a freestanding military. If you needed military grade hardware, you went to the Coast Guard.

Deirdre and Konstantin jumped out of the car and stalked toward the open hangar. They were greeted by a worried looking young man in stained mechanic’s coveralls.

“Mistress Raven, I’m sorry but this is a secure facility. You can’t be here.” Two pairs of dark eyes skewered the youthful technician.

He chose discretion as the better part of valor. He pulled them into the hangar.

“I prepped her this morning, she’s due to go out on a routine snoop in a few hours. If you need up now, this is your girl.”
Their girl was a small, naked looking helicopter, all tubular frame and bubble cockpit. Konstantin could see three seats behind the polished glass, and not much else. Deirdre tapped a fingernail against the tail rotor.

The mechanic was impressed. “Yes mistress, a 47G. She’s old, but she flies true.”

“This here is the Hunin.”

Deirdre opened the door and showed Konstantin how to climb in. Taking her place in the center seat, she began flipping switches, bringing the tiny flying machine to life. Konstantin strapped himself in and settled a spare set of headphones over his ears.

The mechanic was waving his arms and shouting something, but it was lost in the rotor wash.

“What is he saying?”

Deirdre shrugged, focused on her preflight checks. “Something about the chopper’s range. It doesn’t matter; it will simply have to last until we catch up with him. Hopefully before he gets to where he’s going.”

She nodded, “Rome. He’s got to be. My gods, he’s going to bring the girls before the tribunal. They’ll be tortured and incinerated.” Her eyes had lines in the corners Konstantin had never noticed before. Like him, she had lost something precious to the Church. Like him she was in pain.

“No.” Konstantin shook his head, “we’ll catch up to him in time. We’ll save them. We will.”

The Hunin lifted off from the hangar floor with a lurch. Some deft piloting later and it was outside, rising swiftly above the tarmac.

Konstantin settled into his seat. In his mind he crafted a barbed threat, and cast it out on a gossamer nightmare ahead of their throbbing whirlybird.

Solomon Rex’s laughter stopped abruptly. Something a lot like fear crossed his face. Unsure why, but unwilling to take the time to find out, he adjusted his grip on the unconscious twins and flew South as quickly as his mutant wings could take him. He didn’t stop glancing back over his shoulder until Iceland’s rocky coast faded from view.

Secure in their underground fortress, in the room with the mirrored walls, protected by the might of an entire nation, three old figures slept on three thrones of hardwood. They tossed and turned fitfully. One let slip a quiet moan.

Unpleasant were their dreams.