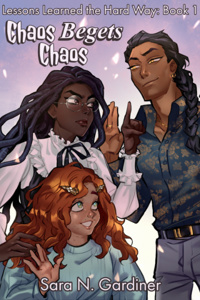 Fun fact: you can find a couple of bonus scenes (and several more on the way) for this story on my Patreon!

As soon as July was safely in her house after that run-in with a new immortal, she fished her phone out of her coat pocket and dialed Valen immediately. After only the first ring, the Reaper answered, “Yeah?”

“We need to talk. Are you available at the moment?”

“I would rather speak to you in person.” Though she preferred to limit her facetime with Valen as much as possible, this would probably take more explaining than she wanted to do over the phone. “It’s important.”

There was a muffled exchange in Spanish between Valen and another woman, presumably her girlfriend, then the Reaper let out a defeated sigh. “Fine. I assume you’re at your place? Give me half an hour and I’ll meet you there.”

“Thank you,” July said stiffly, ending the call. She remained stiff even as she set her purse and books aside and shrugged out of her coat to hang it by the door. She wasn’t afraid. She wasn’t nervous. She was just irritated.

It had now been about six weeks since she and Emma had started their lessons, and she hadn’t been approached even once in all that time. There were still a few immortals around who simply lived in Albany, such as witches’ Familiars and guardian angels, but she knew of them and was aware that they weren’t a threat. This new arrival was something else entirely. Nothing about him had been particularly threatening, but he had still ignored her efforts to get rid of him and insisted on pestering her, which made him a hostile in her book.

While she waited for Valen to arrive, she put some water on to boil and retrieved her laptop from downstairs to record what she knew about ‘Nytep’ into her guide. Unfortunately, that wasn’t much.

Nature: Unclear. A god of some sort, from what I could tell.

Description: Very tall (seemingly) Egyptian man, black hair, snakelike gold-colored eyes. Seems to have a penchant for gold in general. Visibly sharp teeth. Speaks with an RP English accent for some reason. Maybe that was put on for my benefit? I caught him at some sort of anti-witch rally, and although he didn’t recognize me as a Seer, he still picked me out from the crowd and prodded me for further information about myself.

She was still frowning critically at her computer screen when Valen’s sharp knock at the front door drew her attention. “Come in,” she called distractedly from her seat at the kitchen table. She didn’t look up until the lights above her flicked off, and she realized Valen had opened the shades slightly so the room was dimly lit by the afternoon sun.

“Goddamn fluorescents,” the Reaper grumbled, removing her sunglasses as she sat down at the table. July had rarely seen her without them, and for good reason; her eyes—shadowed, colorless, and black where they should’ve been white—were the only part of her appearance that gave her away as inhuman. “Swear I never got this many fucking migraines when you were all using candles and gas lamps. So what’d you call me over for? What was so important it had to be talked out in person?”

Disregarding the annoyance in her tone, July folded her hands in her lap and answered plainly, “I was just followed across town by an unfamiliar immortal.”

“The hell you were,” Valen argued, seeming insulted by the implication that she wasn’t doing her job.

“You think I wouldn’t have noticed?” July snapped back. “He didn’t even try to deny it when I called him out. I’m curious as to how he got past you.”

Valen was silent for a few seconds, frowning harder still, tapping her fingers too hard against the arm of her chair. “I don’t know, but I’ll take care of it. What was he like? Did you get a name?”

“He gave me two, actually. This is everything I know.” She turned her laptop toward Valen, who squinted and quickly turned down its brightness. Realizing she’d never gotten around to actually starting her tea, July got up and did just that, opting for a green varietal as part of her ongoing investigation as to what Valen would actually drink.

As she was working, she heard Valen groan, “Fuuuck.”

“Sort of. I know if there’s anyone who would deliberately ignore my warnings and be able to fly under my radar, it’s him. His name is Nyarlathotep.” The Reaper seemed a little uncomfortable even saying the word out loud. She typed it in herself, which July didn’t care for, but she wouldn’t have known how to spell it based on the pronunciation. “He has about a thousand others, but he usually calls himself C.C. Black to mortals. He’s a Chaos god, the kind that fucks with people’s heads until their minds break. For fun.”

Thinking of the careless, friendly person she had met earlier, July had to admit she wouldn’t have guessed all that based on his demeanor. But then, she’d been fooled before. “Delightful,” she sighed, setting the tea tray down on the table a little harder than necessary. Just when I was starting to think we were safe… “So what do we do about him?”

“Uh, we don’t do anything,” Valen told her firmly. “I’m going to get rid of him. If he shows up again before I can do that, don’t talk to him, and don’t trust a single word he says.”

That provision bothered July for two reasons. First, it was bold of Valen to assume she trusted a word out of any immortal’s mouth. Second, she’d held her own against a hundred other pursuers over the years, some of whom were far more aggressive than this one; did Valen really think she couldn’t handle one more?

“Please, I’m not afraid of him,” she said dismissively, closing her laptop to set it aside and then filling each of their cups. “I could read him the moment he started talking; he’s the sort that thinks he’s found a new toy to play with, just like most of the other god types I’ve met.”

“Yeah, but the word ‘play’ probably means something very different to him than it does to you.” The tone of Valen’s voice was uncharacteristically wary, as if she were nervous about his presence. “Look, just don’t let your guard down because you think you’ve got his number. He’s a good fucking liar and has way more practice manipulating people than you do. You give him so much as an inch, and he’ll find a way to take a mile.”

She’d never acknowledged anyone as a genuine threat to this degree. Most of the time, it was just ‘give me a call and I’ll tell them to fuck off’ or ‘my people can take care of that asshole.’ Gods were a different sort, of course, but July still felt she might be overestimating the problem.

“And you really think if I ignore him, he’ll leave me alone?”

“Most likely. He sees mortals as a source of entertainment,” Valen explained. “If you don’t react the way he wants, he’ll give up and find someone else to bother. Don’t play his games. Don’t answer his questions. Be as boring as possible, and he should lose interest.”

“I’m your best defense, kid. This is just basic advice on how to deal with a narcissist. Lucky for you, you’re probably not interesting enough that he’ll risk pissing me off just to bug you,” Valen snickered.

“Has anyone ever told you what a joy you are to talk to?”

“Nope. But funny enough, that doesn’t keep anyone from asking for my help.” She pushed to her feet, grabbing up her attaché case, but July stopped her.

“Hang on. Have you forgotten there was another aspect to this deal? It’s been over a month, and you still haven’t introduced us to any of your immortal contacts.”

“I’m working on it, all right?” the Reaper snarled, her previous amusement giving way to irritation. “No, I haven’t forgotten, but it’s harder than you might think, working around five different schedules at once—especially when one of them is mine.”

“Why don’t we simplify it, then? You can attend one of my usual lessons with Emma on your own, and you’ll serve as our ‘guest speaker’ for the day. You must have at least one Monday afternoon free in the coming month or so.” July was holding her cup of genmaicha in both hands but didn’t drink it; the smell reminded her that there was a reason she didn’t often brew this blend.

“I guess. You sure you want me getting that involved in the process, though? You know I’m not about to censor myself or sugarcoat anything, and some of the what I have to say might not jive with your, uh, ideals.”

“That’s fine. I’ll think of it as a learning experience for myself too.” It would be a lie to say she wasn’t looking forward to a conversation wherein Valen couldn’t brush off her questions as ‘none of your business.’ “Just be prepared for Emma to have a lot of questions. She always does.”

Bio: I am but a humble nerd trying to make a living writing about magic and love.