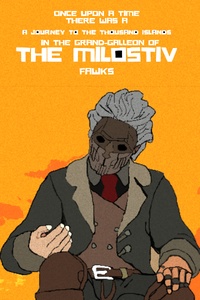 Gabrio sat alongside the edge of the Galleon. Behind him was the people who had started looking at the sky. The heat coming from the sun was unbearable. The flat waters added as they reflect the heat. In some days Gabrio would have to use the water provided to them to wipe the sweat on his brows. Some of the aristocrats and nobles who were used to their posh life had been frequenting Gabrio to ask for relief in this kind of weather.

He had gotten used to the heat. The plants he kept on his cabin was dying that he had to take them to the Ark where he introduced them to Ristina. Ristina, who was unfamiliar of the plants gave it a little test. Gabrio had her taste the thin slices he made from the plant. That made her eager to have them tested. The taste captured her and the productivity of the plant proved to be her liking. She had the long-ears grow it in one patch of the farm. “I’ll send someone to inform you if the growing is successful,” said Ristina.

Gabrio was sure that they had methods on growing baskets of crops during four weeks. He had noticed that Ristina’s laboratory was cooler than his. He was tempted to stay for a while, but he was a physician of the Galleon. He could not slack when there were more people falling to the gloom of the sea.

The gloom was what Gabrio had termed for those who had been drinking under the table. Brawls, arguments, and women pulling other’s hairs as they vent their frustration had led to Gabrio urging the Inquisitor to have one of the empty warehouse turned into a fighting ring to vent these frustrations. It became a gambling ring where they would gather to beat the living shit out of another. Those who participate were mostly those who were called aristocrats. They favored pummeling each other’s face as they then boast about their victory in the Galleon’s bar. The losers were usually in the clinic moaning, complaining how they would have won if it wasn’t for their silly mistake. Gabrio did not supervise them. He didn’t want to get involved in such matters unless it was an important match for two sides. He needed to be in there when it mattered.

The Captain only allowed it as long as no greater harm comes to needed personnel. The sailors were allowed to brawl, but that is if they are willing to work the rig with their muscles sore. Gabrio had to put his foot down when some of the sailors urged to brawl. He said, “If you want to fight, then go ahead. Be aware, that I am not going to use precious supplies to foolishness.”

The betting pool had grown large. Gabrio’s duty was to only watch the aristocrats not get their heads bashed in. He was even allowed to take a shot if some of them are deliberate. The Fleet itself has become a nation composed of small cities and villages in the form of the smaller vessels.

Not to mention that there was a giant floating land in the form of the ark growing into a much larger vessel by extending its roots to the side and forming a bigger much larger vessel that dwarfs the Grand-Galleons. Gabrio could not stop being amazed at the sight of the roots extending and creating an additional hull layer by layer. The blood had once again shown its true form by displaying the sight.

They seem to be planning to create workshops and make use of the resources that would be gathered to create and examine their uses. Though he suspects that the main function of such sorcery was to harvest the sea creatures lurking below. The roots were like giant tendrils that accurately pierces through the skin of the giant beasts. Once the tendrils finds its targets. The tendrils would drag the beast back into newly built structure and the dissection would begin.

Gabrio was invited to one of their dissection sessions. They started by removing the soft-yet hard petal-shaped scale of the beast. Underneath that layer of scale was gray membrane that blocked the sense of smell. Upon closer look they had discovered there were tiny many-legged worms crawling underneath the pores. Under a glass they saw these many critters. They took the critters and discovered that they release corroding acid that helps the creature digest the food by eating the tiny creatures that are invisible to the bare eyes. It was a strange relationship that allowed these two to form a non-harmful relationship.

Of course, he had seen that some of the creatures who are sickened by the critters formed the same green puss. These creatures were not thrown to float and rot on the sea, but were devoured by the Ark itself. To say that the Ark itself was alive, was no understatement. Gabrio had a sneaking suspicion on what the Ark was. The devouring of this Ark made him sure that it was Sentinel Elder Tree, one of the guardian protectors of their cities turned into a living a ship.

When they appear they always turned his head around. The world he knows would crumble bit by bit. This journey had been an eye-opener to Gabrio on how powerful the Lady and her people are. They were primitive in a sense that their technology was beyond their understanding. The key to understanding their technology was certainty in their blood. It bothered Gabrio how a powerful race were not their masters?

Then again, there were people that had proved these people inferior in some times. He recalled it was in Antiquity that most of their cities burned because of the world of a single man whose name were banished from the annals of history. Only his warnings remained and even they could not make humanity forget about the man who had the elven knelt and their cities burned.

The wind was soft and salty. Gabrio noticed that he had been sitting far too long. It was odd that no matter how long he sat under the sun. He never had that tan he wanted. The clouds blocked most of the light, but the shaft of light were like pillars of light. The heat coming from these lights were terrible. Gabrio moved away from the edge of the galleon. He moved to the station where he usually stayed. Dom, who got the habit of staying in the same room read his book.

“Dom, you’re making this worse for us. Get out of my station.”

“I heard that the scholars are trying to figure out to how to shoot bullets. Boredom is quite something eh?”

Gabrio wiped the trail of sweat flowing down his cheek. “I heard that the Ark has made a depository. It seems like these day the Ark can produce anything. It’s even getting bigger.”

“Straight out of magic,” said Dom. “Then again, it is the only possible way. I guess they did not just hope that our supplies could last. We could spend our days in this fleet and no land in sight. If anything it would not surprise me if this become a living island made from the roots of the Ark. They are using the water and the creatures below as nutrition for their living trees. I would hate to see them become our enemy. I wonder how the Chancellor endured.”

“So, what brings you to the deck?”

“This is my spot now,” Dom said. “The Galleon is almost a breathing town. There are hundreds below us. The ventilation inside the Galleon is worrying. If it was not the cool wind, then we might have to worry about how we’ll die because of the lack of air.”

“I had problems with that, recently. Kids getting out of breathe because of the heat inside. If it wasn’t for the sea cooling the hulls, then my clinic would be full of people. It had been like weeks since we started sailing on flat waters.”

“You are awfully free, Doc,” Dom flipped a page. “I guess this is quite day. I wonder what’s next for us. I worry that even though things are peaceful. The creatures being pulled below us are getting bigger and bigger.”

Gabrio nodded. During their first days the creatures below the fleet were the size of a shoe. Later on, they become the size of a table, and then much later on they become the size of a small boat. Right now, they were pulling creatures that are even bigger than some of their junk ships. The sizes of these things were getting bigger as they travel the flat seas. If it wasn’t for the Ark harpooning the creatures before they can get close, then the fleet would have to deal with these creatures trying to slam their backs on the hull. Though they can produce gunpowder in the Ark, the amount of cannon balls that the ship had was limited and to create them in the Ark would take time. Gabrio could not imagine how bigger these creatures are going to be as they continue sailing.

Bio: Someone who you would find scratching his head, staring at the empty wordless page.