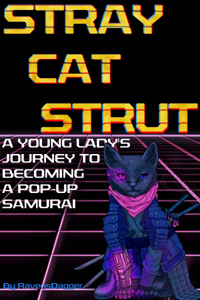 Well, this isn't what I expected to stumble over, but I have to admit I'm more than a little enthused about it. The setting is a distinctly cyberpunk future, with malware packed into even official programs and large corporations slapping their name on anything and everything for advertisements. Seven chapters in, and it's already a pretty significant departure from stories like Cinnamon Bun or Love Crafted, but it hits the ground running. The protagonist being a crippled orphan who picked up responsibility for the rest of the poor forgotten kids at the orphanage, and who's best friend cheerfully navigates around on crutches, builds an instant sense of misfit status and a (true to authorial form) oddly endearing little community. There's also a very immediate sense that even in a world with incredibly advanced technology, they've been swept under the rug and forgotten. Oh, and terrifying aliens are regularly falling out of the sky. That's an important factor too.

Honestly, there isn't too much material to directly review at this point, but if you take the time to read the first few chapters I doubt that you'll be disappointed. The protagonist falls right into the 'Jaded but good-hearted' box, without the slightest bit of manufactured tone, and it meshes with the cyberpunk setting perfectly. Not to mention, there's a single chapter with action, and it charges headfirst into desperate brutality. It's a bit of a leap from the innocent monstrosity of Love Crafted, or earnest effort of Cinnamon Bun, but like I've already said, perfect for the current setting.

So, this may rather early in the story's life cycle to write much of a review, but considering the quality of writing that RavensDagger has already put up on this website, I feel pretty confident in recommending the story off of nothing more than the currently posted chapters.

Pretty good twist on the normal System plot, both in the setting of a futuristic distopia and in the main character by an author whose already proven he has great writing skills. The dialogue is believeable, the fights thrilling, the cliffhangers wrenching, and the characters sympathetic. Can't recommend more, and I promise that you'll be entertained if you give this story a try.

If you like any other RavensDagger works, stop reading reviews and just read the story! It has a great cast of characters and riveting action scenes right off the bat. Every chapter leaves me wanting to read more.

Reviewed at: Chapter Thirty-Six - A Matter of Trust

Cool story but chapters are way to short, by the time you start getting used to it the chapter ends. The frequency helps mitigate that a bit but it's still stops you from immersing yourself. Highly recommend if you're going to read this to Wait till multiple chapters are out before reading. Not good for chapter to chapter reading

Hate the title, love the story

Read a few of your stories and found the others a bit too far into silliness for me, this story hits right in my comfort zone though. Good action, nice banter and likeable characters.

Nothing bad to say about grammar or such, just solid writing to me.

I kinda have to say that your title pushes my buttons a little bit though, should just keep it to "Stray Cat Strut" and leave the rest. In my mind a Title should be short and attention grabbing. Just my opinion though.

That aside, if i had a bit more spare cash lying around i'd definately support your writing, but real life is as it is.

Word count isn't too high so far but what's been put down sets up an intriguing powerset, primary conflict and sociopolitical setting. Cast seems faceted and reasonable so far - traumatized does not mean unreasonable, authoritarian does not mean inflexible, this sort of thing.

Reviews must have a title. This is a title.

I'm not usually a fan of cyberpunk-esque stories,  but there's something about this one.

Well written,  great style,  few to no errors,  still too early for better info on the characters,  but seems solid,  if a little but cliche.

Love the offhand criticism on privacy and invasive advertisements, as well as terms and conditions for everything.

My biggest issue with this story is quite simple:  there's not enough of it.

Ravens, do us a favor and stop wasting time sleeping,  your story needs you.

A cyperpunk story that you didn't know you needed.

For the style of the story, it feels like the author has put a lot of work into imagining what a realistic cyperbunk setting might be like and, most importantly, I feel that they've done it well. Unlike a lot of cyperbunk stories, which go a bit too far in the grimdark direction, the world of SCS feels realistically shitty. There's a logical progression from our current conditions to those of the future with the introduction of an out-of-context problem.

For the actual plotlines of the story. The first arc felt exciting and pulled me in quickly. I felt on the edge my seat as Cat struggled to survive the Incursion and I felt relief when she and her family managed to make it to safety. With the ups and downs of the story I felt the accompanying irritation and amusement, proving that I was invested in the story. However, my minor point of complaint is that at the moment it feels very reactionary, Cat doesn't seem to have any overarcing goals to pursuit now that Lucy and the rest of her ragtag band of orphans are safe. It's amusing to read, but without a strong focus it's a bit harder to stay invested.

In terms of grammar, I don't believe that I'm fully qualified to judge the quality. As long as it's readable I'm happy, so I tend to ignore what might be considered minor mistakes.

I love the characters in this story. They're real, relatable, amusing, and annoying. It feels like the author has managed to avoid any glaring cliches. My favorite character has to be Myalis, the snarky and exasperated AI that she is. It's interesting to wonder just how much of her personality is original and how much is just the projection of Cat's expectation and/or subconscious. In any case, I like the comedic back-and-forth relation that these two protagonists share.

Fun, slightly lewd, worth a read.

The future has arrived, and it is VERY profit hungry. Upon invasion by a hostile all devouring race humanities hope rests firmly upon the shoulders of the Pop up Samurai, ordinary people chosen by an alien system based upon their actions upon encountering the enemy swarm. Need new weapons? No prob, kill a tinne of invaders, then trade in the points to the voice in your head for bigger and bigger booms. Meet one of the ones standing between you and the menu, Stray cat, amputee, orphan, rude, lewd, and crude. Yet without her her friend a pyromaniac nun, and the girl who holds her together humanity is definitely screwed.

Just gonna spoiler all of this for safety's sake.

Stylistically, there are a few small blips here and there where the author assumes the readers will read between the lines and maybe oughtn't to. In particular, I completely misunderstood the relationship between the MC and the love interest until halfway through the first book. I could be stupid, of course, but it did surprise me momentarily.

The story is solid, although the second half of the first book doesn't necessarily seem to follow from Cat's initial motivations. That said, I think there's a subtext about the way becoming a Vanguard and the Vanguard system in general changes motivations for Cat (and others) that may be called back to later.

Grammar and characterization are solid. There might be a tense disagreement or two, particularly early on, but they were easy to ignore. Cat and Myalis are both engaging characters who 100% deserve one-another's ribbing. The Kittens are perhaps a little two dimensional, but that's mostly a function of screen time. I'd like some more time with Lucy that isn't either mid-action or Lucy-as-sex-object (which isn't to say she's objectified, Cat just seems to have a one-track mind).

The setting is stellar, and the unclear intentions of nearly every actor capture the moral hazard inherent to cyberpunk very well. In a week where cyberpunk as a genre was done something of a disservice (okay, a lot of a disservice) this was a nice counterpoint to read.