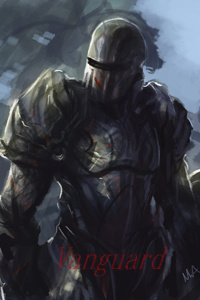 Hey! Short chapter today. This is the last chapter of this mini-arc, so its kinda a wrap up chapter.

I didn't  have any time for my editor, so expect mistakes.

If you find any please point them out!

Leon wiped the blood off his blade, before sliding it back into his sheath. The corpse of the soldier laid sprawled on the ground, even with his injuries Leon was more than enough to kill the man.

Guess it’s not as easy as just strolling out the front gate.

Leons original idea had been to use the chaos of the battle as cover, hoping none would be concerned about a couple of men going in the wrong direction. He had been mistaken, not at all considering he may be mistaken for a looter.

He once more looked upon the body of the man he cut down, not at all regretting his decision. If he allowed the man to live there would have been the chance of Cli’ven catching wind of the encounter, and pacing unwanted attention upon The Gilded Spear.

No, Leon looked at the corpse with a new light.

Taking several steps forward, Leon pulled an old rag from under his chestplate. Pressing the cloth against the wound in the man's chest, he soaked it in fresh blood. He kept the rag in place until it was dripping wet, at which point he removed it along with the soldier's gambison.

It may have seemed in practice to loot the dead, but Leon held no moral qualms. It wasn’t the first time and it sure as hell wouldn’t be the last.

With his grim deed done, Leon walked out of the alley to meet with the waiting Petey.

He took the shirt in hand, giving it a scrutinizing once over.

“Where did you get this?” Petey asked, suspension in his tone.

“He gave it to me.” Leon sarcastically relied, rolling his eyes.

Petey put his hand through the large hole in the chainmail, wiggling his fingers that stuck out the other side.

“You killed him…” Petey whispered, slowly lowering his gaze.

“Yes, I did. You didn’t seem too worried early in the keep.”

“T- that’s different! It was self defense, that man was walking away and you just butchered him in an alley like a criminal!” Petey chided. “This is just wrong…”

“You have a lot to learn about the world if that's where you draw the line. Not everything's black and white. Everyone has their own version of right and wrong, and I’m sure as shit not taking moral advice right now. So please put on the shirt.”

Petey stood quiet for a moment, seemingly thinking of some counterpoint before sighing and finally doing as Leon instructed.

Leon covered Petey's entire face with a layer of blood, hoping to make him seem injured to the untrained eye. Peteys constant protest and squirming only helped make the spatter look more natural.

Petey was starting to look sick to his stomach, his visage paling even further. Just before Leon was able to cover the hole in the chainmail to simulate a chest wound, the rag ran dry.

“Wait here a sec, got to get more blood.” Leon said.

Leon turned his head looking at the downed form on the ground.

“Guess that works too...” He exasperated.

“I can’t believe that worked…” Roger mumbled under his breath, to nobody but himself.

He felt the weight of the purse in his left hand, while also juggling Leon's helm in his right. Five ingots was all Cli’ven had on him at the time, but Roger wasn’t about to hound him for more, his luck was thin enough as it was.

Their escape from the keep was easier than they had expected. Kelos had personally led the charge, and against all odds they had achieved victory. Roger was still surprised, even with Count Elton and the rest of the enemy leadership gone, the offensive should have been a devastating defeat.

The only equipment they had were ladders for god's sake!

Roger shook his head. He knew the only reason victory could have been accomplished, was through sheer numbers and sacrifice. From what Roger had seen, Kelos did not place a high value on the lives of his men. That or his devotion to Dorithe had completely overtaken his sense of mind.

Roger was starting to agree with Leon's distaste for gods.

Luckily Cli’ven was in a rush to spread the word on Elton, by this time next week any follower of The Church of Dorithe would know the face of Elton. Hopefully by that time The Gilded Spear would be halfway to Arotha. Cli’ven didn’t even have the time to debrief with Captain Garet, as was proper protocol. Instead he paid Rogers bonus directly, which was frowned upon.

Roger would of course pay Garet the Spears fee, it was more than enough money and Roger wasn’t feeling particularly greedy. No, Roger was feeling anxious. He had no idea if Leon made it back to camp. His injuries were much worse than Rogers own, and Roger was barely able to walk unassisted. He knew Leon was made of tough stuff, but even he had his limits.

Already, wounded soldiers could be seen being carted back. Unfortunately there were only enough wagons and mules for only the most grievously wounded men. Those with ‘lesser’ wounds were walking alongside Roger. Even still, they tended to be covered in blood and most stared blankly ahead of themselves. What these men had seen and done this day would stay with them for the remainder of their lives.

What made it worse was the fact that most of the men were conscripts and would be returning home soon. This would just be a dark day in their memories, one that may fade but they’ll never truly forget.

People like Roger and Leon had been through much worse and in greater amounts. The very fact it was their choice to continue meant they were strong enough to deal with any trauma they’d experienced.

The culture and economy of Arotha was heavily based on its export of mercenaries, so Roger had time growing up to come to terms with what was in store in battle. He’d heard plenty of stories from his father and his war buddies. Even then, it took time for Roger to become accustomed to the battlefield.

These young men were like Leon, in the way they were thrown into the forefront of conflict and forced to either break or adapt. Judging by the looks of the few faces Roger could see, he’d guess it was mostly the former.

All of this, for one boy.

Leon had severely underestimated the severity of his own injuries. If he was unburded, he would have been fine. The fact he was his full plate and carrying an unconscious teenager on one shoulder, was starting to wear on the man. Petey was small compared to others his age, but that didn’t mean he wasn’t a burden. Leon's left arm was by far the most injured out of his whole body, it was to the point he was unsure if he could lift it above his chest. So the entirety of Petey's mass was carried on Leons right shoulder.

Pain was present throughout his entire body, general battle fatigue. His stomach was starting to roll, making Leon assume he swallowed much more of his own blood than he believed. But worst of all was his vision that was starting to tunnel, with each step he took the darker the ground before him became more dark and distant.

Leon pushed on, it felt as if he should’ve reached the gate long ago, but in truth he had only walked several more blocks. His steps became less and less frequent, until finally they stopped.

Leon fell to one knee, gasping breaths overtook the silence. Even with all his strength, Leon could not manage to stand back up. Leon wasn’t even thinking anymore, at this point instinct alone had been what was driving him forward.

So when he saw with his clouded vision, the group of dark silhouettes walking his way he assumed the worst. Unable to fight, or even stand his mind finally made a merciful decision, and he fell into unconsciousness.

Elton and his men were already underway, the group number just over a dozen. Each man had his own horse, and carried his own supplies. The idea was to be as mobile as possible. Elton looked at each man directly.

These were the most loyal soldiers in his retinue, some had even served his late brother. They may have even served under Eltons children, if he ever had any. Elton was currently the only surviving member of his family line. He wasn’t even the original heir, Eltons brother died in battle ten years earlier, with no children the title of Count fell to Elton.

Looking back to his lands one last time Elton didn’t feel sadness or even loss. What Elton felt was a strange mixture of melancholy and hope. He knew what was in store for the next several years for this world, the lives that would inevitably be destroyed. The fact Elton was able to help the Chosen was something that even in death he would take pride in.

Unfortunately his role was not yet over.

It was time to valiantly run away.