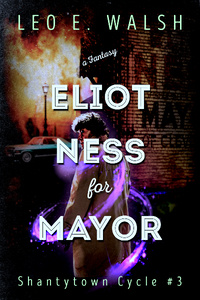 Instead, when he smashed into the alley, traveling near a hundred miles-per-hour, the solid ground stretched like taffy, absorbing his velocity, until he was several feet deep. And then, like a trampoline rebounding, the ground unwarped, shooting him several feet into the air.

When next he hit, the concrete remained rigid. The impact snapped him backward, his head thudding off the concrete and gravel, pain flooding his mind with a blinding light. A beat later, his senses gathered, and he checked his head for blood, finding none.

“Damn, that hurts,” Frank said to the empty alley, patting his body, searching for breaks or serious injury. Though his ass and skull throbbed, he seemed okay. Nothing serious. So he stood, taking his bearings… and then what had happened flashed through his noggin.

Corny had fallen after his prosthetic leg detached, knocking crap all over his apartment…. Frank picked up some stuff before tumbling crown over soles… And then fell thirty-some stories from a skyscraper?… Before he hit the ground….

He snorted at the absurdity.

No way in hell THAT happened, he thought, standing up and dusting cinders off his suit. Regardless, I’m stuck in an alley and I’ve got to hit Severance by eight.

He checked his watch and breathed easy since he had ample time, albeit little to spare. He straightened his tie, cocking the fedora atop his head, again feeling like Lucky Luciano.

His gaze swept the alley. Typical: a brick building to his left, a small duplex right, a weedy fringe, and chest-high chain-link fence separating commercial from residential. He recognized the place when he glanced up, reading the weatherbeaten ‘ELIOT NESS FOR MAYOR OF CLEVELAND’ mural. It wasn’t the one across from the worksite, but another, on E. 76th, near Hough. He snorted, wondering how the hell he’d ended up there, dozens of blocks west of his truck.

“Fuck,” he said to Eliot Ness’s faded visage. “That gimpy idiot must’ve spiked my drink with hippie joy-juice, like acid or magic mushrooms or whatnot….” Shuffling towards the alley mouth, he removed his jacket because the evening air was hot and unbearably muggy, sweat threatening to pool in his—Frank froze, his gaze shooting to Ness’s image.

A growl radiated from deep in his belly. Nothing made sense... When he saw Corny, he’d wring his neck for this monkey business.

Ness’s menacing mien gazed down in stony silence, and Frank shrugged. Though the painting gave Frank someone—or technically someTHING—to talk to, the G-Man’s flat image couldn’t help Frank in three-dimensional reality. So he walked towards the street, figuring to catch a bus or cab, though hailing a cabbie on Hough seemed unlikely since the Hough neighborhood was bad.

Metal screeching on metal and the puff of brakes startled him present. A bus stopping, he realized, dashing to catch it. Thank God.

At the street, he turned left, dashing for the bus several blocks away. Its door opened, a lone black male in a cook’s whites stepping down.

Frank closed the distance, sprinting from intersection to intersection, checking for traffic at each crosswalk before bolting towards the bus. A block and a half away, he began waving his arms and hollering, but the door closed. Instead of continuing forward, the driver pulled a U-turn, driving away and stranding Frank.

He stopped and hunched, hands on his hips, catching his breath, his lungs on fire and heartbeats thudding like tom-toms.

The black cook crossed Hough Avenue, so Frank raised his voice and trotted his way, saying, “Wait up, would you, young fella?”

The cook halted as Frank jaywalked, catching up. “Hey, you know which bus runs to University Heights?”

“That one, sir, the number nine.” He nodded at the bus rumbling up the road, burying his hands in his pockets. “Don't think any more are coming tonight.”

The chef pointed up the street, “Riot, sir.”

Frank gulped, noticing a large crowd of coloreds milling across Hough from a dive bar. A smaller group, white men armed with rifles, faced them, protecting the bar. Further up the street, an apartment building burned.

“The fuck…” Frank said, slipping into amazement for several beats. “You know what happened?”

The cook shrugged. “Hell if I know. Just finished working. Riding home, the bus dispatcher orders the driver to head back downtown. I begged him to let me off. Gotta pick up my kids from my mama, who’s babysitting. Want to avoid this mess, though.” He chin-pointed to the mob, sucking his teeth.

A ‘CRASH’ sent his pulse racing.

A flash, and his eyes shot up the block.

With a ‘WHOOF,’ a mint-condition, candy apple red early ‘60s Cadillac Coupe De Ville went up in flames. Across from it, two slender negro high schoolers hightailed through a vacant lot.

Heedless of the danger, Frank dashed after them but gave up as he reached the car. He skidded to a stop, almost falling on his ass because the dress shoes, smooth and lacking the waffle-soles he was used to, slipped on the tree lawn as he veered to avoid the scorching flames. As his heart slowed to normal, he watched the lot, straining to see them, but they’d vanished.

I have to call the fire department and then the cops. Because trash like that, burning a mint-condition Caddie…. Why?

He considered the painstaking work that went into the refurb. The hours locating parts, buffing, polishing, and matching original specs. The careful craftsmanship, destroyed by a bottle, gas, rags, and a Zippo.

Anger raged in his belly as he peered into the darkening evening, inhaling the rancid smells of burning plastic and gasoline, searching for the kids he knew he’d never see. He ground his molars, thinking, God damned low-life vandals… Hard work building something, much easier to tear it down…. He sighed, turning back towards Hough, where he’d for sure find a payphone.

Frank could understand a dude so hungry he’d rob to eat since that temptation had nagged him during the Depression, times when hunger burned in his belly so hot it scorched. And he could understand crimes of passion. Further, he had seen drunks and addicts in DTs, so could dig why they robbed to support their habits.

But blowing up a classic car for kicks makes no sense, he thought. Idiocy.

At the intersection, Frank peered both ways, scanning for a phone booth. Odds were, the bar, which the sign declared was ‘Seventy Niner’s Café,’ had one inside. He snorted. Between white dudes with rifles and colored guys with rocks, Molotovs, and whatnot, he’d avoid Seventy Niner’s like the plague. As Frank crossed Hough, the cook emerged from a side street and halted in front of the bar, raising his hands. Three large, beefy cops swooped after the cook, a red-haired thug tackling him. The cook cowered, hands raised in supplication. But the beefy cops kicked and bashed him, over and over, the cook squirming in pain, grunting. Mortified, Frank dashed up the road towards them.

“Wait, stop that,” he said, his voice booming. “Any fool can see the kid’s not resisting. Leave him.” Confused, the police halted, looking at him, their mouths hanging open, gasping with exertion.

A plug-ugly, pock-marked cop kicked the kid, grabbing his short afro and turning his face towards Frank. “He’s the firebug, right?”

Frank laughed, spiteful, his lip snarling. “Not a snowball’s chance in hell. The kid was helping me. We saw the firebomb go off. Together.” Frank’s gaze shot to the officer, his eyes narrowing as his gorge rose, remembering the cops beating the innocent chef like a common thug. “And what’s your badge number, officer? Christ, beating an unarmed civilian—”

Frank saw stars, literal stars, and his knees buckled. To keep his balance, he went down on his knee. A pain burned along his eye socket.

His heart pounding, he ducked, his arms protecting his head, without thinking. The cops followed suit. Bottles, and chunks of brick and concrete raining down upon them, Frank dashed to the other side of the street, the three cops trailing behind, towards the safety of the Seventy Niner’s Café. The armed men rushed towards them, waving their rifles, keeping the rioters at bay. A husky armed man in a cheap navy suit ran to him, raising his rifle to the stone-throwers. Their ardor quelled by the threat, the rioters retreated.

The man dragged Frank to the bar’s entrance, and grabbed his chin with his stubby fingers, shaking his head. “Christ, you’re gonna have a shiner there.”

Across the street, several colored men dressed in black leather, two wearing Black Panthers berets, hustled the chef away. Frank was glad the kid was safe. He didn’t deserve the beat-down the cops gave him.

The stocky armed man released Frank’s chin, pushing him through the door. “Get some ice on that.”

Frank dug in his heels, and asked, “Payphone in there? I’ve got to call my son in Mentor. And the fire department.”

The man nodded. “Tell them Abe said you can use the phone behind the bar. On the house.”

Frank entered. As the door closed behind him, he breathed deep, the air inside heavy, humid and boozy. But quiet. He savored the contrast. The street was a cacophony of chaos: people yelling, rocks and bottles smashing, and whatnot. Seventy Niner’s seemed like a fortress of solitude.

Frank crumpled into a barstool, ordering a whiskey, a beer, the phone, and an ice pack from the swarthy bartender, saying, “Abe sent me.” One by one, the man laid the items before Frank. Frank pulled out his wallet, and the man shook his head.

Pleased, Frank sat catching his breath and icing down his face with ice wrapped in a clean bar towel. After removing his too-hot suit jacket and fedora and placing them on the barstool next to him, he dialed. Paul did not answer. But the fire department did. Frank reported the burning Caddie on East 76th south of Hough, address unknown. Duty done, he sipped the harsh, cheap whiskey, scowling. Cheap well bourbon, he realized but shrugged it off as the alcohol calmed his nerves.

Bio: A Clevelander. An aspiring novelist. A Buckeye, with a BS from Ohio State. A liberal Rust Belt redneck. Who reads. A lot.

In 2014, I moved back to oft-cloudy Cleveland after six years in mostly-sunny Los Angeles. Sort of like LeBron returning from Miami, but less cool.