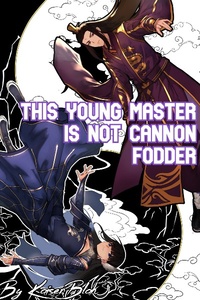 This Young Master is not Cannon Fodder

On the surface, Xi Tianyi was the only son of Sword Empress Xi of the Buzhou Immortal Sect, the number one expert in the Huang Realm. His birth was noble, his status exalted. But the truth was that Xi Tianyi was actually a reincarnated man from a world known as Earth.

On Earth, he was no one special, but with his new life, Xi Tianyi aims to reign invincible: past, present, and future. Among his goals was to travel back to Earth and reunite with his family.

However, as Xi Tianyi proceeds further on his Immortal path, he discovers that rather than the protagonist, why does he seem more like the cannon fodder villain?

Currently in the process of revising old chapters.

Reviewed at: Chapter 22: Preparation for the Core Formation Heavenly Tribulation

But slowly as I read, I wondered. Why does it never actually lean into it? Why does it only have the occasional surface 'haha's'? And at other times seems entirely unaware of what it's doing?

It seems to me that it actually wants to be a serious story, which not only contrasts with the comedic tone of the early parts, but many things that can be overlooked or are even intentional and beneficial in a comedy, suddenly become glaring flaws in a serious story.

This story is a blast from the past. You're getting all of your classic xianxia tropes played 100% stone serious dead straight. You open twelve meridians to move on from the meridian opening realm, but the MC opened 8 secret meridians on top of that to gain special powers. Tribulation lightning largely exists to be refined by the MC for more power. For crying out loud, we even got a multi chapter tournament arc that existed to serve no story purpose but increase word count. This is original flavor 2012 era xianxia.

Note that my review of the first few chapters would have been much lower, as I was expecting a parody. This story is not a parody at all, unless you count the transmigrating MC shaking his head and thinking to himself "this is just like all those cliche novels I used to read." If you can set aside the expectations of humor that the blurb creates, the story is  enjoyable for what it is.

I'm sure lots of people will like this, but it's not for me

Yeah so, it's a little too plot armory  for me and the mc is a little too overpowerd/blessed by opportunities and ass pull mc chosen by the heavens for my liking.

However, I can imagine how this story will progress and the type of tropes that have and will appear during this story, it's perfect for new and young readers just getting into these types of stories.

If I rated it lower it would be purely based on personal taste and a complete disservice to the story itself even if I'm probably not going to continue reading it, I hope the author continues this story for the people who will appreciate it.

My cup of tea

I've been enjoying this a lot and I've been reading this for a few months now. I really enjoy the interactions between MC and his mom. My only real gripes with this story are that there's too many characters that I just can't remember who's who if we don't meet them for 10 chapters and I wish Tianyi and his mom got to develop their relationship some more. They've been kinda hands-off-y with each other and they feel kinda distant now.

Reviewed at: Chapter 103: Challenging the Son of the Sword Empress to a Spar

I am no good at writing reveiws, so I'll keep this short.

The story so far is good, with almost none of the usual tropes of Wuxia, which can be good or bad, depending how you implement them. I have to say he did it well.

Grammar is 4.5 because even if he is taking suggestions from the comments (I think) there are a few here and there. still a good job though.

All I'm going to say is that I love the style.

And the character is well written, with a few tropes, the good ones in my opinion, but a little too arrogant in my opinion. that he chooses not to remember poeple if they don't seem important makes him seem like a douche, even if he is polite. even so, that is a flaw, so well written.

the frequency of the chapters is nice too.

If you read this review, I would say if you like some of the cultivation tropes like I do, this is a good read.

Reviewed at: Chapter 96: Departing for the Heavenly Connection Gathering

I'm new to cultivation novels. But I found this story a nice adventure fantasy novel with OP reincarnated MC.

The plot is good, with interesting ideas. The flow of the story is okay. The characters, their personality, their relationships and their motives are the strong point. They are believable and attractive. The clichee novel protagonists popping up in multiple places allows the story to introduce many side-characters in a fresh way and I'm very expectant as to how they will be used later in the story.

It's a decent Xianxia novel, but it's fairly generic other than the trope-filled 'MC' side characters. The writing mostly follows the standard Xianxia style and there's some grammatical stumbles, but overall it's quite readable. However, you'll get the overly flowery, borderline nonsensical descriptions of spiritual roots, martial arts, cultivation, etc. Basically, the standard Xianxia powerleveling stuff; don't really expect any cleverness in fights or logic in the magic system (cultivation is basically a magic system, right?). There seems to be some more explanation about the politics of the various sects, but that's about it as far as worldbuilding is concerned. The characters are pretty bland and generally lack depth, and I don't really expect much growth or character development moving forward.

If this was fashioned into a parody where the MC uses his trope knowledge to avoid problems and gain power, I could see this being far more enjoyable to read. But so far, it's just a standard Xianxia with an OP MC. Maybe something to binge if you're particularly bored, but overall there's nothing new here.

Classic Xianxia. Worth a read

Tldt: MC is overpowdered but not abusive with this power. Well written classic Xianxia.

Classic xianxia with solid story and characters. A little slow but well written and interesting but the plot is pretty good. Most xianxia are action to action to action to action which this is not. This has more story and world building. The author is taking their time and seems to be enjoying the process. Updates frequently which is always good. Worth a read if you like the genre.

I've been looking at the other reviews and noticed that this book is often called out for following the general tropes of the genre. However I don't think this is that bad honestly. I think the author does a good job of character development even with the 'slightly' over powered protagonist. Conflict can come in many forms and in my opinion the internal conflicts that we see in the novel are well done. Enjoyable read!

Significantly better than the reviews suggest

I had been putting this story off for months because the top reviews at the time really painted it in a bad light. After picking this story up yesterday I've already read 800 pages and only put it down to write this review because I wanted to check to see how many more chapters I'd get to read(40).

This is very much a xianxia story but it is so far above the typical generic/cliche ridden trash that pollutes translation sites that I almost want to dive back into more of them(almost).

The characters are unique and engaging, the mc is mostly not an idiot(he ignores a few too many obvious clues regarding other peoples origins), the supporting characters grow, and the enemies all make sense within the context of the setting.

The style is fantastic directly ripping off all the lore from myths to successful webnovels through parody characters. It's a world filled with oppertunity and countless novel protagonists with unending lucky encounters. The mc has quite a few but so does everyone else. The cultivation system feels super polished as well as the combat/tribulation/dao seeking. The world setting is also very enjoyable and intersting.

The story is great, and has a bit of everything, all of which was done quite well, even the tournament arc which I wish was skipped only lasted a couple chapters. The story really focuses on the mc but that focus also branches out and really fleshed out the world.

My only real criticsm is the grammar, this story could really use an editor, every once in a while there is a typo or missed word or sentence that should be rephrased but luckily it didnt affect the flow or my enjoyment of the story.