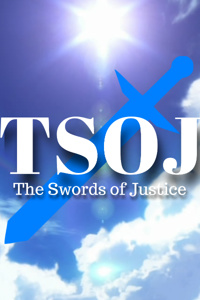 The Swords of Justice

"Was Akio with him?"

"No, We were passing by the entrance when we found this Entrance open and Sara on the ground"

"ok...take her to the machine Lisa"

"Where are you Akio?"

Sam looks towards Akira and was angry as he tells Anna

"I am going to look for him...you guys stay here"

Sam then runs away as Amy also follows him, Riku looks towards Sam running away and then looks towards Akira and the team as she sighs

"I am going with them"

Riku tells Anna and runs out of the base, Alex looks towards them and then gets a serious face

"Are you not going to look for Akio?"

Alex hears that and agrees as he runs out of the base, Ino also follows him while Akira looks depressed while Mirai looks towards him

"You should take some rest"

"I am sorry Akio"

Sam, Amy, Riku, Alex and Ino separated in a group of two to find Akio while communicating with Anna who was looking at all the Cameras in the city in search of Akio

"Where could have he gone?"

"He should not have gone far...Must be nearby"

"No...wait I see something A man dressed in black hoodie and pants is going inside a Dark Alley, You will be able to see him if you take the upcoming right"

Alex walks up to him and puts his hand on his shoulder when that man grabs Akio's hand, tilts his hand and pushes him on the ground as he turns back and looks towards Ino

Ino looks towards him and recognizes that he is not Akio...as she quickly tells Anna on the phone

He was so fast that without even realizing, He was in front of Ino

Alex notices this as he stands up and quickly stands up and grabs his sword on his back as he heads towards that man and was about to hit him with it when suddenly A Dark Vine comes out from Behind that man and grabs Alex, He was shocked by this as the man slams Alex on the walls on the alleyway and then throws him on the ground

Alex slowly stands up and looks towards the man who was really close to Ino, Ino takes this chance to run away as the Man notices it and starts to run after her when Alex grabs his sword with both his hands as he says

Zavier starts to shine with bright red light as it gives out a Red Armour on Alex's hands up to his shoulder, he suddenly comes out of the alleyway with a quick speed and starts to run after that Man

Alex cuts all those vines and heads towards him

Meanwhile, at the base, Anna saw all of this through the cameras and reports Sam and Riku and tells one of them to head for backup...Sam agrees to it and starts running towards the direction to where Alex was when he travelled some distance away from Riku and Amy someone suddenly attacked him from the darkness, Sam dodges the attack and looks towards the person who attacked him

Sam's eyes widened with surprise as he says