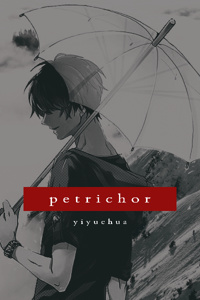 “What should I do?” Glenn asks him with a bit of concern.

Shu sighs and positions his head comfortably – or as comfortably as he could get – on the other’s shoulder. He closes his eyes and murmurs, “Distract me.”

“Should I recite something for you? Speak about contemporary art? Read you a story?” Glenn actively tries to list out some activities. “Poetry? Fairy tales?”

“Just keep talking. I’m already provoked by the sound of your voice,” the younger man says.

Glenn laughs pleasantly. “Why is that?”

The other man agitates him in a manner he can’t exactly discern. Perhaps it’s the way he encroaches the boundaries that Shu had persistently set, deliberately testing him, teasing him but never going too far. Perhaps it’s the amber eyes that constantly looks at him, that looks through him.

“I’m not bad,” the other responds as he gently daps at the blood on his forehead. Shu doesn’t have the energy to protest so he remains motionless.

“I don’t understand your intentions.”

“What makes you think I have intentions?” Glenn murmurs.

His eyelashes quiver as a damp cotton ball makes contact with his eyebrow. “You don’t?”

Glenn doesn’t answer and focuses on the limited treatment, carefully avoiding the deep gash. “Do you know how to hotwire a car?” he asks a question instead, likely to keep him conscious.

Shu grits his teeth as the vehicles rolls over stone flooring. Meng Qing quietly directs her brother on the road. There’s hope ahead – the path is starting to smooth out. “Only a few models.”

“Meng Yun aside, what’s your excuse?”

“Well-read and practiced,” he responds vaguely.

“It’s not a very ethical skill,” Glenn tells him.

There’s a short moment of silence before Glenn asks, “Do you want to take apart my gun?”

Shu tries to raise his brows, but the slight contortion makes his face twitch instead. “…What.”

He doesn’t open his eyes but there’s clear amusement in the other’s tone. “I thought you were interested in examining it. Was I wrong?”

He’s not wrong per se, but the connotation is strange. “It’s not the gun. It’s the bullet.”

Glenn nods in understanding. “The diameter and weight are limited to certain types of cartridges. Do you have a gun?”

“Picked one up,” he murmurs.

The other man chortles lowly, obviously not convinced. “You seem to pick up a lot of things.”

Glenn turns to Meng Yun, who is now speeding the black truck toward a steep hill. “Meng Yun, how much longer? His complexion’s getting worse.”

“I-it should be d-down this hill,” Meng Yun stammers. There are tears piling in the corners of his eyes as he recklessly sends them plunging down. “I-I’m not good with heights. Today is definitely not my day.”

Fair point – he had been forced on a long excursion by foot only to be sent toppling down a wooden bridge hours after. It’s not on his itinerary, either, when dark silhouettes start appearing in the distance.

She emotionlessly stares at the Corrupted. “Run them over.”

Meng Yun gets inexplicable surges of bravery at critical times and he goes full throttle, slamming into the hoard of black. The body armor plows through and unidentified pieces of flesh fly across the windshield. The car doesn’t halt, however, and it descends downhill, propelled by gravity.

“Okay, stop, stop,” Meng Qing calmly commands as they get dangerously close to a building – the community hospital ahead.

Meng Yun regains his senses and slams the brakes. The car skids nearly twenty meters, leaving a harsh, black trail. It knocks down another Corrupted on the way, and for extra security, Meng Yun backs up and runs it over twice. Elliptical bloodstains splatter on the windshield, obscuring a portion of their view.

“How are you?” Glenn asks smoothly to the patient in the backseat.

Shu is certain he had passed out. He has no recollection of the previous thirty seconds. The last thing he had felt was the impact of the first collision. It was unpleasant.

He blinks slowly back to life and doesn’t reply.

“Let’s go,” Glenn says as he opens the car door. “Meng Qing, come with us. Meng Yun and Eri stay in the car. Drive away if there’s trouble.”

Eri hadn’t uttered a single word since the incident. She looks at the pale young man in the backseat.

She’s blinking back tears and Shu furrows his eyebrows. “Why are you sorry?”

“Because you protected me and pushed away, and I-I was supposed to be…” Her tears start falling. She looks up with reddened cheeks. “S-supposed to—”

“Stop,” Shu interrupts her. “I didn’t get injured for you.”

Glenn suddenly reaches over and lifts him up, supporting him by the waist and the back of his legs. “Later,” he says. “You can talk later.”

“Can you move by yourself?”

The answer itself is uncertain, but he is certain of one thing. “I’m uncomfortable.”

His protests were ignored as they walk and shortly after, he groans and buries his head into the other’s chest, wanting to just faint and remain unconscious.

When they enter the small hospital, Glenn leans down and whispers, “Are you embarrassed?”

“I think you can stop talking now.” It’s a flat response, but it comes off choked.

Meng Qing peers through the darkness and frowns. “The power isn’t on.”

Their footsteps are light as they scour their surroundings. Faint phosphorous lights give an eerie glow of green in the narrow corridors. Meng Qing leads them forward, clearly familiar with the building layout.

“What are we looking for?” Glenn asks her.

“We need to perform a blood transfusion.” Meng Qing gestures to the staircase. The dim exit sign flickers by the entrance and emits a low buzz. “The storage is on the second floor. Blood cells can last more than a month if well-preserved. The temperature is 5°C and if we’re lucky, there should be no complications.”

Glenn doesn’t focus on the stuttering lights but rather on the cracks by the doorknob. The fiberglass is dented, chipped, and not by natural corrosion.

“Unfortunately,” he says, “it looks like there will be complications.”

Meng Qing sighs. “As expected, hospitals are one of the most dangerous institutions during an outbreak.”

A soft thud sounds behind the closed door and the two are instantly alert. Meng Qing pulls out a rectangular object and rotates the gear shift dial at its side. A long hammer slowly unsheathes. It’s glittery, it’s pink, and it’s completely incompatible with the straight-faced female’s image.

“Yun gave it to me,” she says, unbothered. “It’s lightweight but it packs quite a destructive force.”

The thuds get louder and Glenn turns to her. “Kick it down?”

She nods an affirmative and moves to the side. Glenn slams his foot onto the door. A reverberating crack sounds across the hallway and the door breaks, violently unhinged from its frame.

On the other side, a sea of Corrupted stand in wait for their prey. They amass together in an ugly, dense blob, swarming all the way to the top of the stairs.

“I’ll open a path,” Glenn says to Meng Qing. You go grab what we need.”

The black-haired female doesn’t need him to finish before she slams the hammer on a nearby foe. Its fluids splatter from the blunt force and it drops down to the floor, temporarily disabled.

“Alright,” she says. “My combat strength isn’t great, but I can handle a couple of these. I’ll provide support.”

Shu groggily nudges his companion. “Put me down.”

The man heeds the words and gently places him outside the hallway. “I’ll come back soon,” he says before he runs off to rejoin Meng Qing.

Shu leans back against the wall. In his lethargic, muddled haze, the clamors of the nearby battle sound distant over his palpitating heart. His skin is ashen, and his lips are devoid of color. He takes a shuddering breath but he’s losing sensation. He can hardly register the tingling on his shoulder.

The unknown drug is still coursing its way through his body – it burns, it lingers, and Shu thinks infection would have been a better outcome.

The dim hallway appears pitch-black through his spotted vision, but there’s movement in front of him again and he registers a flash of dark amber eyes. The man is speaking to him, but it only comes off muted.

He’s being swept off the ground again. Firm hands grip his figure and he doesn’t mind it as much this time.

“—how are you holding?” It’s soothing. He should’ve taken the opportunity to hear Glenn read a story, tell a fairy tale, or perhaps recite poetry. The latter has a voice suited for the phonaesthetics of spoken word.

Shu blinks up at him through lidded eyes. His world is spinning but he sees blood – both red and black – on the other man’s neck. “Still not infected?” he whispers instead after regaining some clarity.

There’s a soft laugh, light and pleasant, and they’re heading up the stairs. “No.”

In the laboratory, bags of blood are torn apart, staining the floor in a messy pool of red. Dull streaks of light spill from a broken window to the left, reflecting on cracked glass. The culprit, a brawny Type II, is hunched over the blood samples, not yet aware of the intruders.

Shu blindly reaches under Glenn’s jacket and around the man’s belt. He hums in satisfaction when he feels a holster. Glenn stiffens unnoticeably as Shu pulls out a dark zinc pistol.

“What’s wrong?” Shu asks as he unlatches the safety, “tell me where to aim.”

“To the left,” Glenn recovers, “four inches down.”

“Yes,” Glenn guides him and whispers by his ear. “Now.”

The raven-haired man wasn’t lying about the recoil. He’s caught off-guard and the gun jerks backward as a deafening bang goes off. It does hit the intended target though. The Type II goes down in an explosive display, bursting out brain matter from its head.

“Interesting,” he murmurs through shallow breaths, “I might take it apart later.”

A sudden issue appears during a crisis. Shu hadn’t cared enough to go to a proper doctor in the last decade, let alone inquire on his blood type.

“Okay…” Meng Qing just says before she switches into medical mode. “B-negative. I’m afraid the chances of us finding enough O-negative or B-negative blood are slim. The Corrupted destroyed most of the samples and—”

“Use mine,” Glenn says again.

Shu’s brain short-circuits at this moment and he really is going to faint now. His vision fades to black and he loses consciousness completely. The last thing he faintly picks up is Meng Qing’s uncertain voice.