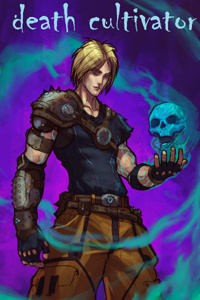 Death Cultivator (Cultivator in Another World Vol. I & II)

Fight for your Soul.

New cultivator Grady Hake thought his problems would disappear when he became a member of the strongest gang on the prison planet, but all it did was thrust him into the kill-or-be-killed world of the Eight-Legged Dragons. Now if he wants to survive, he’ll have to learn to cloak his deadly Spirit attacks in shadow, control the ancient revenant trying to take over his mind, and defeat the Angel of Death who dropped him on Van Diemann in the first place.

Warning: This isn't an isekai where the MC immediately becomes OP and starts revenge-killing everyone once he gets Death powers. Death is coming, but it's a slow burn. Like some of the reviewers for Volume I mentioned, the MC has a past and it effects his actions and choices in the new world.

So I thought this review was actually really needed to warn some readers about what this story is like. Almost everything in this story is top notch, legitimately. Except the main character is very very frustrating to read about. He seems to give no thought to the consequences of his actions, chapter after chapter mouthing of to and fighting beings who can one shot him with little effort.

Worse then that he's a bad anime protag when it comes to his morals. Refuses to kill people even if someone has a literal gun to his head and the person he's sposed to kill has tried to kill him on multiple occasions.

And then does everything in his power to save that person even though doing so puts him in incredible danger.

He even runs into a massive firefight to save the people who have enslaved him and habitually tortured and starved him.

Beyond that, u have a MC who has the element of death at his command. You would think he would do some cool edgy death stuff as his powers. But no. His first two abilities he works on and develops is a bargain bin spider sense and shadow clone jutsu.

Now if all this was just a part of the characters growth and he would learn from his many many mistakes that could be compelling writing, but the mc's plot armor is consistently taking all the consequences from his choices away.

Now if none of that seems like it would bother you, you will seriously love this story. But if it does it makes it a very frustrating story to read.

While this story does have great world building, there are two things that I found frustrating.

1. The MC refuses to kill, even if the person attempted to kill him multiple times

2. The MC mouths off to anyone and everyone who can mop the floor with him

Both could count as character traits, but that doesn't stop them from getting on your nerves. If you don't mind it, you'll love the story.

I'd recommend giving it a try.

Decent effort but MC is a wet noodle.

Had to stop reading when the MC basically was  willing to die to save Warcry.

Too much christian morality for my teste

I read up to the point where protagonist risking his life and life of his friends save the guy who hate him, tried to kill him and caused him to become a slave. For the reason of...For no reason. And before that protagonist fighting to defend the bunch of criminals who enslaved him. That create conetxt for "God love me" thought of protagonist in the beginning of the story. Turn the other cheek, redeem the sinners - it all make sense if this story is some kind of christian parable.

Reviewed at: Chapter 29 - Mr. Champion and the Martial Devil

It's still pretty early in the story, but from what I've seen it's looking pretty good! The style and grammar are fantastic, characters are pretty good too but again it's too early to tell, however, I'm hopeful that there is some good character growth in store for our MC.

Not gonna do a long in depth review but I just wanted to say how much I enjoy the characters in this. Sure the world building is interesting and the storie’s got some stakes and shit that’s interesting but I actually care about the characters which is the important part (also the the most frustrating part in most cultivation novels I’ve read).

The MC is a nice guy, and for good reason. He doesn't want to end up like his dad or disappoint his grandpa, oh did I forget to mention? This kid actually has a past and it influences his actions in a strange and scary world. And yes I mean kid, not edgelord supreme faceslap murder hobo.

Tldr: I like it, and if you get you panties in a twist over MC’s having morals and shit maybe you won't but like, tough shit?

Reviewed at: Chapter 21 - Making the Quota

Twenty chapters in and things went from bad to pitiable to bad to even worse to a ray of sunshine to bad all over. I don't enjoy stories were predominantly bad things happen but if there's one thing I know it's that were there's cultivation there is sweet sweet revenge coming soon. I hope to hold out till then

In other news it is VERY well written, the author is doing a Great Job! I loathe the bad guys and absolutely love the good ones!

Borderlands and cultivation with fantastic characters

Reviewed at: Chapter 18 - Welcome to the Gang

Elfshanx is so good at this it's humbling. Her characters banter and talk naturally. Her world feels alive and lived in.  The other reviewer is right, the hand to hand combat is intense and well described.

Story: So far so great. Ornery down on his luck protagonist dies and goes to Pandora as a prisoner.

Grammar: With the exception of one (1!) misspelled word, perfect as far as I can tell. I'm an author, not an editor though so take that with a grain of salt.

Character: Amazing. This is obviously the author's forte. They feel alive and natural. I'm attached to seeing what happens to our MC. I want to see him grow his powers and somehow keep the gang from taking all his cultivated spirit.

Hooked! Read it, you won't regret it.

I rather like this story, and even better the author has definitely been in a fight before, because they sure as hell can convey a realistic action scene.