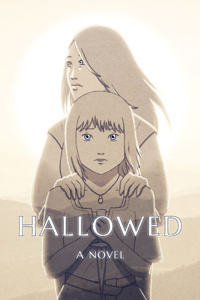 Avenel is a fabled assassin now retired to a life of solitude. Deena is a sheltered village girl unaware of her own heritage. When tragedy leaves Deena orphaned and homeless, the two embark on a journey across the continent, bound together by Avenel's promise to keep Deena safe. But when a prophesied sign of the end of the world appears, their journey becomes about more than just the fate of a single girl.

This is a great, and tragically underappreciated, story, with ancient mysteries, relics of not-quite-destroyed civilizations, impending apocalypse and surprisingly nice assassins.

Style: Can't really say much more than "I like it". We get to look through the eyes of Deena mostly, but there are other viewpoint characters for moments when she is not around, and flashbacks for important moments in the past.

Story: No stops, and no slowing down - stuff keeps happening. The end-of-the-world prophecy means the two countries of Ajjraea and Elyria are trying to do something, even if no one really knows what's going on. Oh, and the suspicious people who actually seem to be in the know are a strong force driving the plot onwards, too, even if their methods look very much like indiscriminate slaughter.

Characters: There's a lot of them, and most of them likeable and three-dimensional. A lot less jerks than in most stories on this site, too, which is nice. The protagonist, Deena, is mostly passive so far, but with a great deal of trauma right in the first chapter and barely a month of time in story passing, it's quite understandable. Hopefully she'll get to shine in the end.

Edit: I didn't like the direction the story took in the second half, though. With the weirdness, and much more magic, and (big spoiler for the ending)

Avenel killing Deena, because Deena's death in the right place is the only thing capable of saving the world

I'm loving the new "Others have also liked" feature, I've found a lot of underrated stories with it.

Reviewed at the start of part 2, Hallowed has been a blast so far. The grammar is perfect, the prose is straightforward but not repetitive or mindnumbing, and the worldbuilding is nice. The characters act like and talk like real people and the pacing is fast but not rushed.

We follow Deena, an innocent teenage girl, as she journeys from her backwater village and explores the wider world. Deena is accompanied by Avenel, a badass former assassin sworn to protect her, which is good since Deena's secret heritage means a great deal of people want her dead.

1. There are a lot of minor characters introduced, many at the same time, so it's hard to keep track of all the positions and relationships.

2. The main character has very little agency or power so far, if that's an issue for you. However, the perspective isn't locked to her and we do get insight from several other characters.

Overall though, the story is genuinely enjoyable and I really want to see how it all turns out. I do hope Deena gets training or power of some kind as it would make her more interesting.

Caught up and updated at Ch 33: The plot has gotten really complicated and in a "coincidental" way that I'm not too fond of. Side characters have developed a lot but the main character has still just been dragged along for the ride and, if anything, become more useless.

A Solid Read with Action and Intrigue

TLDR: Read if you like that overaching doomsday, intrigue style plot. Also just a pretty good story in general.

Slightly Longer:
I liked this story and highly recommend it to anyone who is looking for a story that contains characters who might be biased but still retain a sense of pragmistism to go like "hmm, its doomsday so lets help each other". Yet they still maintain their sense of self and their biases dont just magic away.

One key issue with the story is just the formatting of the dates. They are interwoven into the story itself and not enough space is there to seperate them, an example being:

This is a minor problem that just makes it a bit more confusing than necessary when reading, but is easily solvable by just bolding, seperating or adding more space between the dates and the rest of the text. But to be fair, for me it doesn't take away from the score because I still found myself fascinated and intrigued by this story in equal measures that I can overlook such minor issues because I just want to know what happens next!