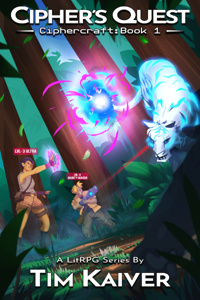 *CIpher's Quest will enter KU on Tuesday, 7/21, so all but first two chapters will be removed 7/20. Next week, will begin posting book two, Windwalker.*

Complete the quest. Expand the game. Save the universe.

Cullen and his bounty hunter sidekick arrive at a spider-infested prison to exchange prisoners. A secret plan will put a pullspace pilot in their hands, and if all goes well, they will be on to their next bounty.
All went as planned until a strange message welcomed Cullen into a game interwoven with reality. Suddenly, the bounties he planned to rescue will become his allies in a race to recover the puzzle pieces that could unlock this power for all.
As Cullen and his two telepath party members gain levels and special abilities, they'll risk their lives to cross a jungle full of lunatic telepaths and tigers throwing EMPs out of their tails.
Reject Jungle is home to more than just the genetically enhanced and unstable; it’s also the path the Cipher’s Quest has set out for him to return from exile.
If he succeeds, the gamelike interface and power enabling of the Cipher will spread across the universe, equipping those who've been running for their lives to RPG-style punch their genocidal rulers right in the mouth. And hopefully before those bastards find the planet where Cullen used to call home.
Cipher's Quest contains LitRPG, RealRPG elements such as leveling, experience points, level-up bonuses, skill gains, unique classes and monsters, and the hope of resurrecting a once buried city to townbuild their way to galactic victory. Ohh, yeah. Cipher's Quest is a stat-crunch level 4 out of 10, but lays the foundation to crunch into new territory with each book in the series. The action, adventure and role playing epic plots within are perfect for fans of Stargate and Dune, and old school RPG's like Final Fantasy and Age of Empire.

Great start to a new book. Only a few chapters in, but what I've read so far is great. Looking forward to more.

There's not a lot of world or character building yet, but I'm already interested in seeing where things go. I like the exile and bounty hunter aspects. It hasn't been used in LitRPG yet. I'm also looking forward to seeing how game elements play into the story and what they do.