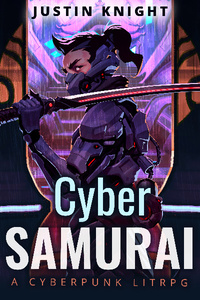 What would you do if you woke up in a cyberpunk role-playing game?

With no recollection of the past, Damien suddenly finds himself in a role-playing game set in a futuristic city filled with high-tech cyberware, flying cars, and sci-fi katanas.

But how did he get here? A new virtual reality system that wiped out his memories? An elaborate dream?

Who knows? And honestly, who cares?

It’s not every day that you get to join a ragtag group of outcasts and live out your fantasies in a cyberpunk setting. From evading corrupt law enforcement, to bounty hunting, to taking part in gang wars; there’s always something to do in the city of Neopolis. Not to mention the fame and fortune that comes with being a cyber samurai.

With so much to do in such a crazy world, where should one set their sights to?

For Damien, the answer is simple.

He’s gonna take over the entire city, and he’s gonna have a damn good time doing it.

Reviewed at: Chapter 4 - Status and Stats

Wake up, Samurai. We got a city to burn.

A great novel. It's an Enjoyable read and entertaining. So far, it's reinvigorating and I love it. It keeps me entertained.

Nevertheless, I like the way the fiction is written and it tries out a different type of character who is more realistic.

The story doesn't seem clear yet, probably because there's only 4 chapters and the Main character doesn't really have a goal yet but I believe this is a solid novel. I highly reccomend this novel.

Reviewed at: Chapter 3 - An Abrupt Realization

Not too much content as of the time I'm writing this review (barely 5K!), but the prose so far is readable and the LitRPG elements aren't taking up too much room.

Might turn into something to look into in a little while. A story to keep an eye on. I haven't been wowed by it yet, but that might yet come. The genre mix and premise are keeping this afloat for now.

Reviewed at: Chapter 3 - An Abrupt Realization

Only a few chapters in so far but from the way the story has been established and the clarity of the prose I'm already invested in finding out what happens next.

The setup of the story has been handled really well. I appreciate a story that knows what it's about and gets straight to the point.

So far Cyber Samurai follows all the tropes you would expect from a classic cyberpunk setting so if that's what you're in the mood for (perhaps your're waiting for a certain game set in 2077 like me ;)) then definitely give it a shot.

Somehow this fills a niche I didn't know I needed.

Reviewed at: Chapter 12 - A Chaotic Battlefield

Honestly I'll come right out the gate and say it. This story is really f*cking impressive. It's like the author took an RPG and said "screw your fantasy bullsh*t! Let's slap some insane cyberpunk chaos on this b*tch!"

The world is being fleshed out in bits and pieces at a time, the characters you are getting regular interactions with at this point are really cool with hints of backstory that could prove interesting, and best of all is the way this story all comes together just suits it so well.

Style and story, both are fantastic despite the fact that I only have access to 12 delicious chapters of awesomeness. GIVE ME MORE AUTHOR! *cracks whip*

With grammar it's mostly perfect. There is a couple instances of a repeated word or a typo, but those are few and far between. Honestly docking just a half star felt like it would be too harsh. Especially comparing it to the golden turds one finds littering this site.

Character is the only place I think might need a little improvement and that's only for the main character. Keep in mind that this is only 12 chapters in and the author seems to be going for the long haul. There could easily be more plans to flesh Damien out as the story progresses. Anyways my only gripe is that the main character shows up with no memory. Normally that alone would be perfectly fine, but then you tack on the fact that he comes to the conclusion that he is *insert Spoiler of where he is* there isn't any doubt when he gets his first clue. He just comes to the realization and he's like "oh yeah that's definitely it. No way I'm wrong about this" despite the fact he doesn't know anything about himself from the time of waking up other then his own name. Now, as I said, this is early in the story. For all I know Damien is wrong about his opinion and will eventually get the almighty slap of God to knock some sense into him. Maybe there is another plot point that will make you get that 'aah-HAH!' moment. For right now though it seems weird that a guy with no memories is so sure about his current situation after seeing the 'clue'

Other then that SUPER DUPER MINOR issue, this story is absolutely worth the read. Go read it... READ IT NOW!!!

Wake the fuck up, Samurai. We've got a city to burn.

Reviewed at: Chapter 11 - Preparing to Strike

Wake the fuck up, Samurai. We've got a city to burn.

A great novel, one of the best I've read here. It's really refreshing to finally see a cyberpunk novel on here after so long of the cyberpunk tag being filled with novels that aren't actually cyberpunk. 15k words and 12 chapters in and this shows a lot of promise. I'm not usually a LitRPG reader, but this novel was so good that I read it anyway. But again, I'm a sucker for a good cyberpunk, so I might be biased here. No power fantasy elements here as far as I can tell here, so that's a plus. This is going to be one of the best novels on Royalroad at this rate when it's done. I can't wait for this to become a movie or television series.